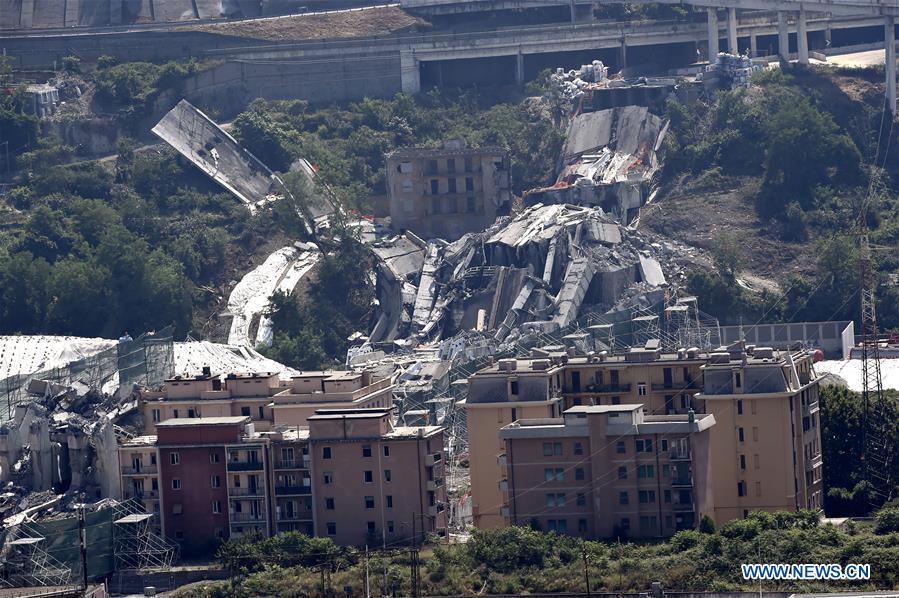 Photo taken on June 28, 2019 shows the view after controlled explosions demolishing two of the pylons of the Morandi bridge in Genoa, Italy. The remaining towers of a major bridge collapsed last summer in the northwest city of Genoa, which killed 43 people, were destroyed on Friday in order to open way to reconstruction. (Xinhua/Alberto Lingria)

The remaining towers of a major bridge collapsed last summer in the northwest city of Genoa, which killed 43 people, were destroyed on Friday in order to open way to reconstruction.

The operation was carried out by firefighters and by demolition experts with the Italian army, under constant monitoring of the national Civil Protection agency. About 3,500 of residents were evacuated for safety reasons.

The so-called Morandi Bridge -- an originally 1,182-meter viaduct connecting Genoa west and east, and linking the city to two major highways -- had stood some 50 meters high over the city.

The still-standing towers no. 10 and 11 were destroyed at 9:37 a.m. local time through a controlled explosion, with dynamite and plastic positioned on the bridge's pillars and stays, the local government said.

"All operations were carried out in accordance with methods and times announced," Genoa municipality specified in a statement.

"From today on, reconstruction can definitely begin," it added.

The explosion sent thousands of tonnes of concrete to the ground, and emergency teams put water tanks around the place, and made large use of water cannons to help suppress the dust caused by the fall of the huge remains.

Light sea breezes blowing on Genoa on Friday morning also helped avoid a major spread of the dust, pushing it towards the nearby mountains, local authorities explained.

The Interior Ministry said on Twitter that "security checks on the buildings' statics and quality of the air were being carried out after the operation for security reasons.

The bridge Morandi -- built between 1963 and 1967 -- partially collapsed on Aug. 14 last year, while at least 30 cars and five heavy trucks were passing through it.

Overall, 43 people lost their life in the incident, and another 15 were seriously injured.

Hundreds of residents were evacuated in the days following the collapse of the infrastructure, and at least 311 households among them had to permanently abandon their houses, which were to be demolished for security reasons.

The demolition of the remaining towers on Friday would now allow the construction of a new viaduct to kick off. The project will be led by major Italian architect Renzo Piano -- born in Genoa -- who after the tragedy last year volunteered for new bridge design.

The work will be carried out by a consortium led by infrastructure company Salini Impregilo with Fincantieri shipbuilder and Italferr, a subsidiary of Italy's railways company Ferrovie dello Stato.

According to details so far unveiled to Italian media by Piano and local authorities in Genoa, the new bridge would overall cost some 202 million euros (229.8 U.S. dollars), and was said to be ready by end of 2019.

The cement for the foundation of the first pillar was put earlier this week. In that occasion, Infrastructure and Transport Minister Danilo Toninelli told local media that such deadline was likely to be respected, and the new viaduct would be inaugurated in April 2020.