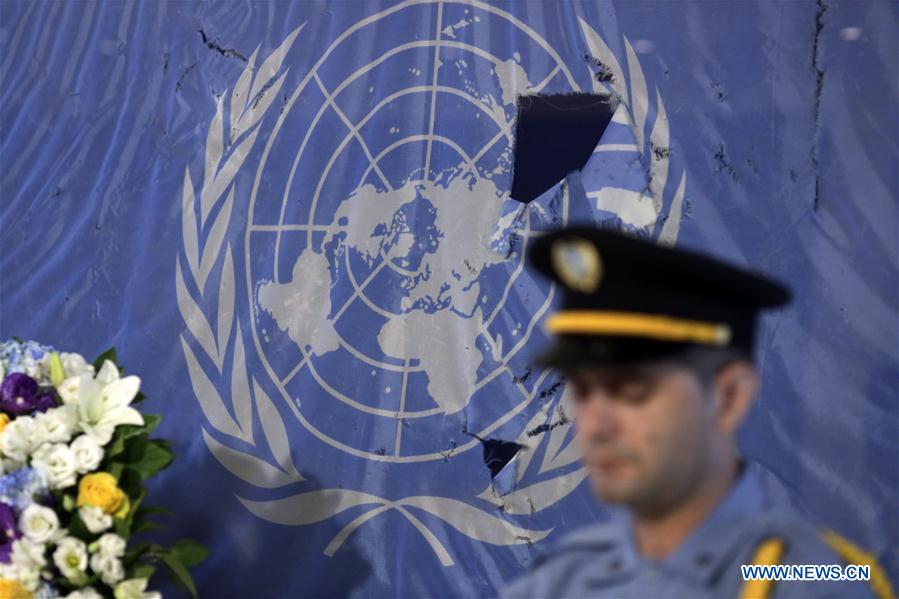 The United Nations flag which was retrieved from the bombing site of the UN headquarters in Baghdad is pictured at the UN headquarters in New York, on Aug. 19, 2019. The United Nations held a wreath-laying ceremony Monday to commemorate its 22 staffers killed in the 2003 attack in the Iraqi capital of Baghdad. The date was designated as World Humanitarian Day by the UN General Assembly in 2008 to mark the attack. (Xinhua/Li Muzi)

The United Nations held a wreath-laying ceremony Monday to commemorate its 22 staffers killed in the 2003 attack in the Iraqi capital of Baghdad.

The ceremony took place at Memorial Wall inside the UN General Assembly Visitors Lobby, where a flag retrieved from the bombing site is framed and preserved.

UN Deputy Secretary-General Amina Mohammed led a minute of silence in honor of all the UN personnel who sacrificed their lives in the service of the world body.

In her remarks, Mohammed said the loss of their lives has "brought important lessons," leading to changes at the United Nations.

She also expressed her confidence that her colleagues will never lose faith in the role of the United Nations, and that they will remain determined to fulfil their responsibility to work for peace, development and human rights.

"Those who attack the United Nations want to make us afraid, feel weak, and to retreat. Those we honor today inspire us to be bold and determined to go forward," she said.

On Aug. 19, a bomb attack took place at the Canal Hotel in Baghdad, targeting the UN Assistance Mission in Iraq. This was the first mass terror attack deliberately targeting the UN.

The bombing killed more than 20 people, including the world body's top envoy in Iraq, Sergio Vieira de Mello, and injured over 150 others.

The date was designated as World Humanitarian Day by the UN General Assembly in 2008 to mark the attack.

Meanwhile, UN Secretary-General Antonio Guterres has issued a message for the world day.

"This year, we pay special tribute to women humanitarians and the huge difference they make for millions of women, men and children in urgent need," said Guterres.

He said from supporting civilians caught up in crisis to addressing disease outbreaks, women humanitarians are on the front lines. "Their presence makes aid operations more effective by increasing their reach."

He added that women's participation also improves the humanitarian response to gender-based violence, which increases during emergencies.

The UN chief called upon world leaders and all parties to conflict to ensure that humanitarians are protected from harm as required under international law.