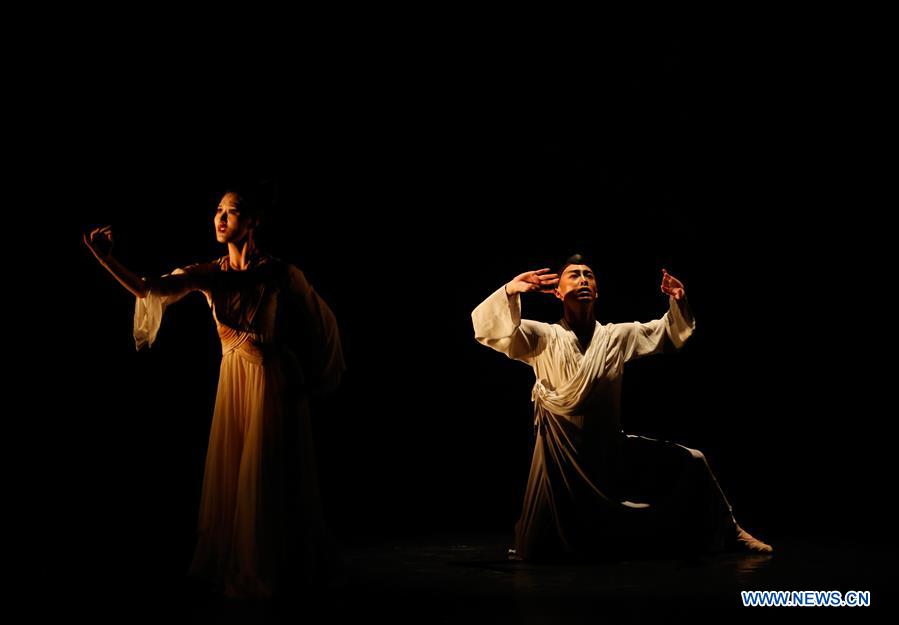 The Suzanne Dellal Center for Dance and Theater in the central Israeli city of Tel Aviv was crowded with audience enjoying the Chinese dance drama Shi Feng on Monday evening.

The dance drama, performed by dancers of China National Opera & Dance Drama Theater as part of the celebrations for the upcoming Chinese New Year, injected the air of joy into the Year of the Rat which will start on Jan. 25.

Shi Feng, which refers to the spirit of Chinese intellectuals, has served as the cornerstone of traditional Chinese culture. The dance drama expressed the spirit characterized by benevolence, righteousness, manners, wisdom and trustworthiness.

Integrating with Chinese classical and modern dance, the performance was welcomed warmly by Israeli audience. The Chinese dance drama will continue to be performed on Tuesday evening to satisfy the demand of more Israeli audience.

"The dance performance is very amazing and we are purely enjoyed," said Liat Pardo, a 28-year-old Israeli dancer.

Pardo told Xinhua that she was surprised by the superb dancing techniques of Chinese dancers and hopes to have the opportunity to appreciate Chinese dance in China.

The 40-year-old Rami Yifrach was also moved by the Chinese dance drama.

The dance drama conveyed the morals of Chinese culture like justice and integrity through dancers' movement, Yifrach told Xinhua.

A total of three Chinese artist groups participate in the series of celebrations for the upcoming Chinese New Year held in Israel, said Tao Chen, director of China Cultural Center in Tel Aviv.

Prior to the Shi Feng dance drama, a martial arts troupe from Wudang Mountain, known as a traditional center for the teaching and practice of martial arts located in central China's Hubei Province, demonstrated the Chinese martial arts for Israelis from Jan. 16 to Jan. 18.

Chinese famous dancer Yang Liping would bring her version of Igor Stravinsky's The Rite of Spring, where Yang integrates Chinese and Western cultures by using a lot of oriental images, according to Tao.

The celebrations for the Chinese New Year in Israel have been held for 12 consecutive years, Tao told Xinhua.