E-mail
by Meng Lingjuan
As the second China International Import Expo (CIIE) is around the corner, the reporter of China Economic Net (CEN) has got the exhibition catalogue in the first time. This year, a total of 28 Pakistani enterprises will participate in the CIIE, nearly three times the number of last year. The young man wearing BOYLONDON is a fashion pioneer in Pakistan. They are the first Pakistani companies to arrange exhibits at the second China International Import Expo. Behind them is a Korean cosmetics exhibition area. (Economic Daily - China Economic Net/Meng Lingjuan)
Less than 35 Pakistani enterprises attend CIIE, no surgical instrument enterprises
The exhibition catalogue is "limited edition" publication. Last year, 10 Pakistani companies appeared in the first CIIE catalogue. According to the reporter, two surgical instrument companies did not appear due to visa problem at that time. A total of 28 Pakistani companies are included in the catalogue this year, less than 35 as reported by Pakistani media before, but still nearly three times the number of last year.
The reporter noticed that this year Pakistani companies are at three halls, namely, 6.1, 7.2 and 8.1. Compared with last year, Hall 8.1 replaces Hall 7.1. According to the list of 28 Pakistani enterprises, there are no surgical instrument manufacturers. While this industry is one of the major foreign exchange earning industries of Pakistan, which was mainly located in Hall 7.1 last year. 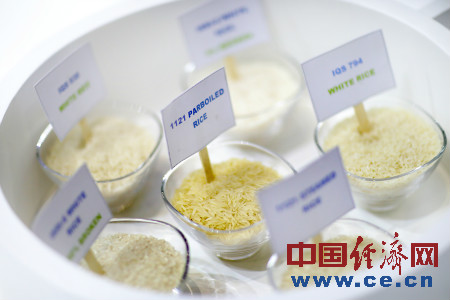 GARIBSONS (PV) LTD is one of the Pakistani enterprises which will participate in the CIIE for the second time. The picture shows the exhibits before the opening of the CIIE. (Economic Daily - China Economic Net/Yu Hezhang)
The enterprise that will exhibit at Hall 8.1 is GARIBSONS (PV) LTD, one of the three Pakistani enterprises that participated in the CIIE last year. GARIBSONS was at Hall 7.2 last year. Last year’s exhibition catalogue introduced it as the largest producer and exporter of rice in Pakistan, producing white rice, 386 rice, D98 rice, etc. This year's new version of catalogue introduces that GARIBSONS is a family business founded in 1976 and passed on to three generations.
Pakistan not granted "Guests of Honor" status, politician and industrialist lead the team
When the Expo entered into 100-day countdown at the end of July, 15 countries were designated as "Guests of Honor", including Cambodia, France, Greece, India, Kazakhstan and so on. Among those countries, only Russia entered the list of "Guests of Honor" again. About one month ago, Pakistani Prime Minister Imran Khan concluded his visit to China on October 9. Two days later, Chinese President Xi Jinping visited India.
The Pakistani delegation is led by Abdul Razak Dawood, adviser to the Prime Minister on Commerce, Textile, Industry, Production and Investment. Dawood accompanied Prime Minister Imran Khan to attend the second Belt and Road Forum for International Cooperation in April and to visit China in October. He used to serve as Minister of Commerce, Industry and Production, Director of State Bank of Pakistan, university teacher and rector, as well as CEO of Descon Engineering Limited.
Attention on China-Pakistan medicinal plants cooperation, TDAP participates directly Pakistani exhibitors step in the exhibition hall successively on November 4, a day before the opening of the CIIE. (Economic Daily - China Economic Net/Meng Lingjuan)
In addition to GARIBSONS, Marhaba, a medicinal plant company, also participated in the first CIIE. Badar uz Zaman, Commercial Counselor of Pakistani Embassy in China, told CEN reporter before that Pakistan extensively grows raw materials of traditional Chinese medicine (TCM). It is reported that the Pakistani Horticultural Development and Export company, which will be unable to attend this year’s CIIE, will also visit China with a delegation of Pakistani medicinal plants in the near future. Ten days ago, President Xi Jinping urged to advance the modernization, industrialization and globalization of TCM.
Among the list of 28 Pakistani exhibitors on the exhibition catalogue, the Trade Development Authority of Pakistan (TDAP) is the last one. As the governmental organizer of the exhibition last year, the TDAP will participate directly this year at “Quality Life” Hall 6.1 C. According to a report by Pakistani media on November 4, the TDAP will try to introduce special products of Pakistan and boost its export.
Share to
0
Related Articles: