World political and business leaders will flock to the snow-capped Swiss town of Davos next week for the 2020 World Economic Forum (WEF) Annual Meeting, sharing their ideas on the theme "Stakeholders for a Cohesive and Sustainable World."

Three years ago at the same spot, Chinese President Xi Jinping delivered a landmark speech at the 2017 WEF, and also addressed the United Nations Office at Geneva, calling for concerted efforts to champion globalization and build a community with a shared future for mankind.

Guided by such a vision, China has worked to bring the world together to solve the most unprecedented problems challenging peace and development today. 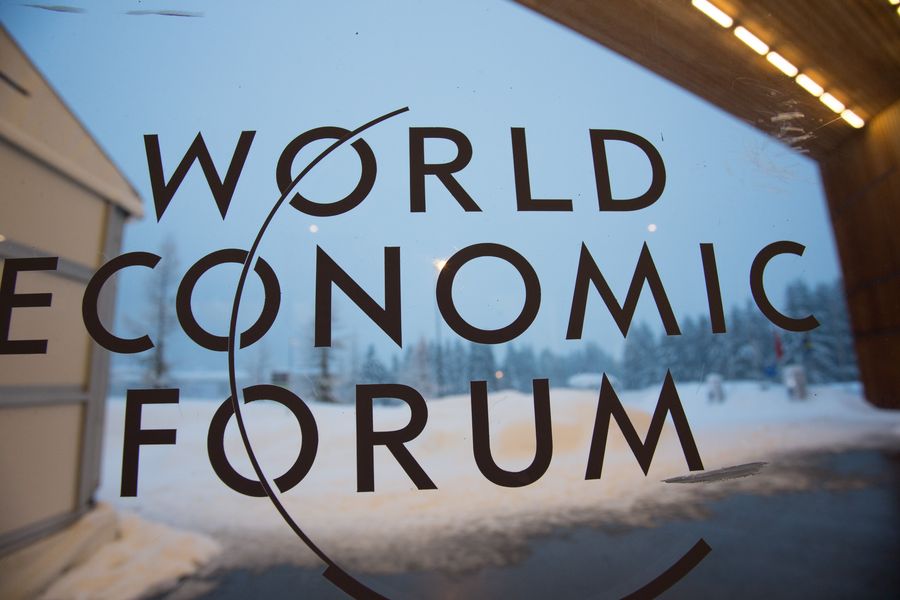 The world has witnessed unprecedented changes over the past three years, adding to uncertainty about the future.

With trade protectionism the norm and trade tensions striking a nerve, the slowing-down of global growth is edging towards a new decade low. In October, the International Monetary Fund (IMF) downgraded its expectations for world economic growth to 3 percent for 2019, the slowest pace since the 2008 global financial crisis. 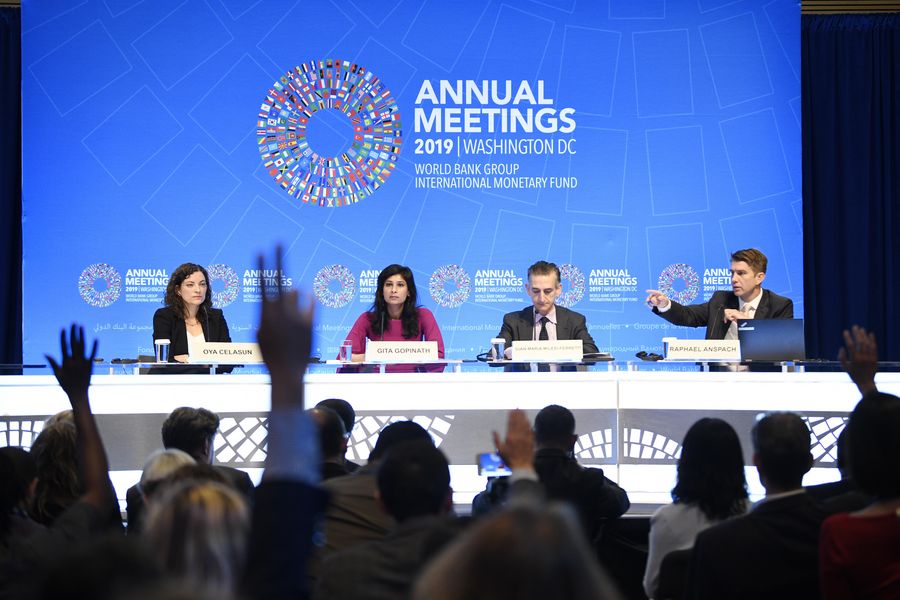 "Rising trade and geopolitical tensions have increased uncertainty about the future of the global trading system and international cooperation more generally," the IMF said in its October report.

Beside of protectionist moves, unilateralism is also on the rise and has been eroding international solidarity. A prolonged Brexit has drained Britain and its European partners. Washington has abandoned its due responsibilities on the global stage with its withdrawal from international agreements, such as the Iran nuclear deal, the Intermediate-Range Nuclear Forces Treaty, and the Paris climate agreement.

Meanwhile, in a complex and interconnected world, countries find themselves facing more common challenges in maintaining effective state governance, safeguarding regional peace, narrowing the income gap, and adapting to changes emerging from a new round of technological revolution.

No one can stand up alone to these challenges, and isolationist and protectionist actions will only worsen the situation.

Connective power, against this backdrop, can be a remedy to heal this divisive world and a force to build a more prosperous global community. And China's practice over the years has proven its viability. 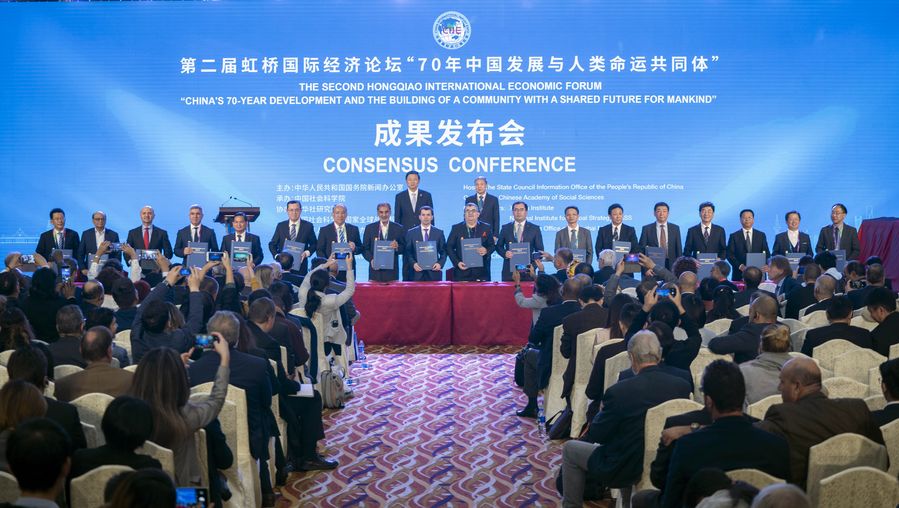 Guests attend the signing ceremony of an agreement on the cooperation between Asian think tanks during the consensus conference for the second Hongqiao International Economic Forum on China's 70-year Development and the Building of a Community with a Shared Future for Mankind in Shanghai, east China, Nov. 6, 2019 (Xinhua/Cai Yang)

In his Davos speech in 2017, Xi stressed the need to pursue a model of open and win-win cooperation. In practice, China has been an important player in fostering connective power on the global stage.

From the Belt and Road Initiative (BRI) to the two editions of the China International Import Expo, China has offered platforms of opportunities and a road to prosperity for its partners.

The BRI, proposed in 2013, aims to build trade and infrastructure networks connecting Asia with Europe and Africa -- on and beyond the ancient Silk Road routes.

The BRI reduces shipping times for both BRI and non-BRI economies, which translates to significant reductions in trade costs, according to a report by World Bank economists published in 2018.

China also seeks to dovetail the initiative with the development priorities of several Asian, African and European nations. The Piraeus Port in Greece, under cooperation with China, has been built into the largest port in the Mediterranean region and one of the fastest growing container terminals in the world. The project has created jobs for locals and boosted the Greek economy, previously hit by a long debt crisis.

Connecting countries through culture and people-to-people exchanges is also an important driver for human progress and global peace and prosperity.

Frequent high-level exchanges in recent years, along with major events such as the Conference on Dialogue of Asian Civilizations held in Beijing in May, have seen more diversified cooperation to support exchanges of tourists, youth, think tanks, and museums across borders.

China is also a firm defender of multilateralism, calling for concerted efforts at the policy level to improve global governance on various international occasions. Through concrete actions, it has pushed to improve the rules-based global multilateral trading system, and bolster coordination on combatting terrorism, cyber security, and climate change, to name a few. 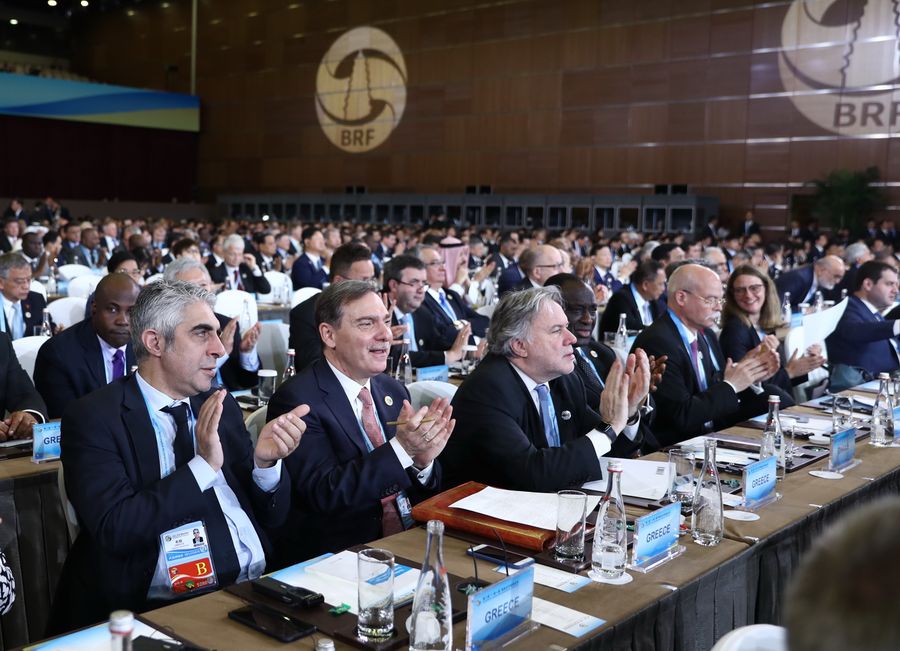 The opening ceremony of the Second Belt and Road Forum for International Cooperation is held at the China National Convention Center in Beijing, capital of China, April 26, 2019. (Xinhua/Ju Peng)

Using connective power to tackle pressing global issues has gained traction from scholars and experts across the world.

"Anything which helps make the world more safe ... should surely be welcomed, and in today's global environment which we maintain by being, and staying, 'connected,' this initiative by China deserves to be welcomed most warmly," Anthony Glees, a professor of international relations and security at the University of Buckingham, told Xinhua.

"It could be seen as a realistic attempt to recognize that there are issues and tensions that could become fissile but that together, through diplomacy, they are capable of resolution," Glees said. "Two heads are always better than one, a dozen heads even more so." 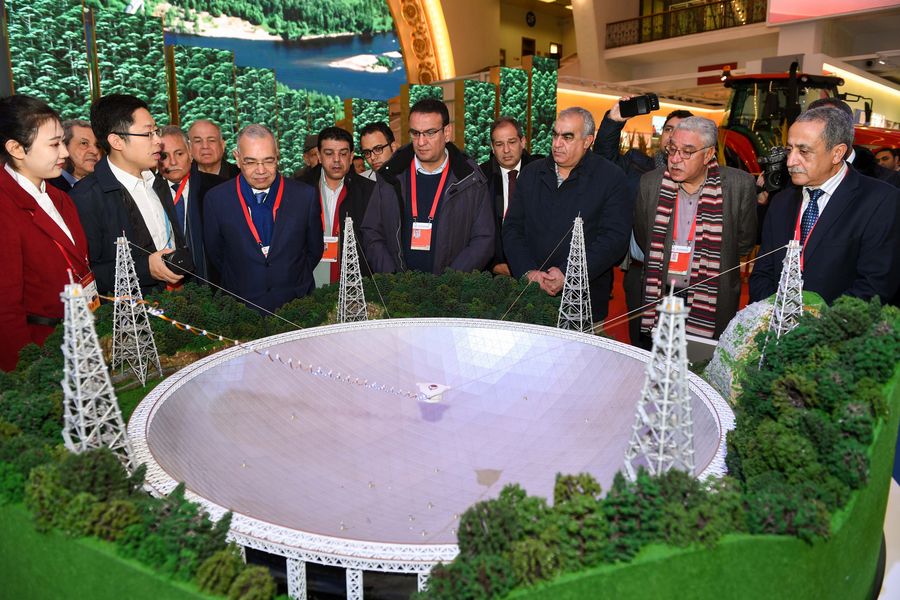 Some leaders of foreign parties, who were here to attend the Communist Party of China (CPC) in Dialogue with World Political Parties High-Level Meeting, visit an exhibition displaying China's outstanding achievements over the past five years in Beijing, capital of China, Dec. 1, 2017. (Xinhua/Chen Yehua)

In turbulent times, China remains at the vanguard of protecting the common interests of most countries. It remains committed to promoting fairness and justice, and safeguarding multilateralism to build a community with a shared future.

Greek Prime Minister Kyriakos Mitsotakis once commented that Greece has come to understand the true meaning of "friends" through cooperation with China on the Piraeus Port.

Energy is the mainstay of every development aspiration, said Costantinos Bt. Costantinos, a professor of public policy at the Addis Ababa University in Ethiopia, and "any agenda or initiative that aims to create ... energy interconnection should be given the highest priority if we have to create a better interconnected world."

China can play a vital role in terms of promoting global energy interconnection, said the scholar, adding that massive initiatives require transnational cooperation and commitment from every potential stakeholder. 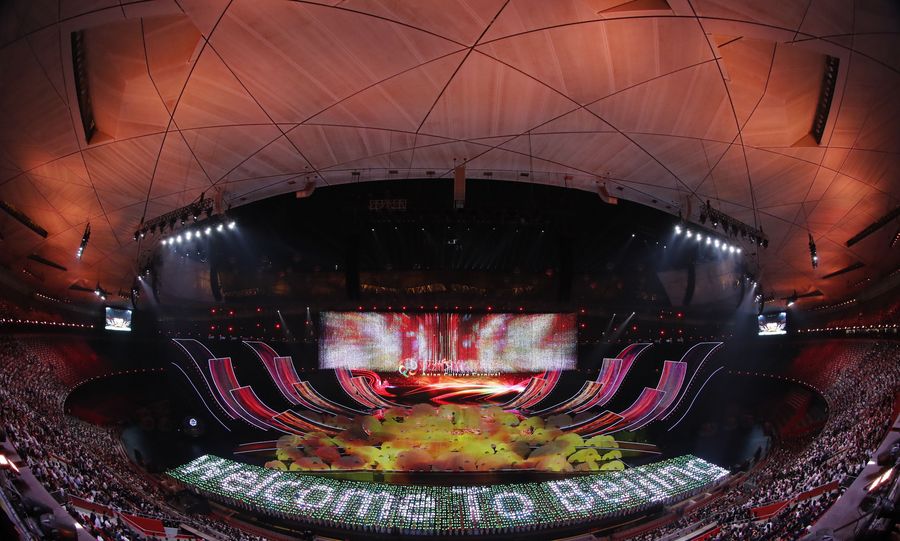 An Asian culture carnival is held during the Conference on Dialogue of Asian Civilizations (CDAC) at the National Stadium, or the Bird's Nest, in Beijing, capital of China, May 15, 2019. (Xinhua/Shen Bohan)

Charles K. Armstrong, a professor with the Department of History at Columbia University in New York, told Xinhua that "China is contributing enormously to the global economy and new technological developments."

"It has become a catalyst for connection and exchange throughout Eurasia and beyond, in the spirit of pluralism and peaceful co-existence of different political, economic and social systems," he said.