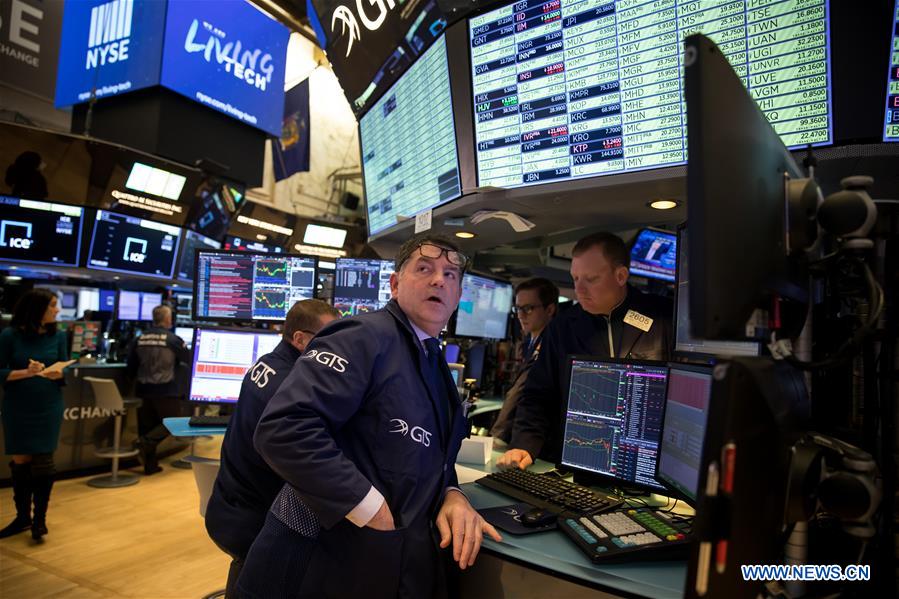 A measure of implied volatility on Wall Street touched its highest level in history. The Cboe Volatility Index, widely considered as the best fear gauge in the stock market, jumped 42.99 percent to 82.69 on Monday, marking its highest finish on record.

The major averages fell to their lows in late session after U.S. President Donald Trump said the COVID-19 outbreak could last for months and the U.S. economy "may be" heading into a recession. At one point during late intraday trading, the Dow was down more than 3,000 points.

Trading was halted for 15 minutes on Wall Street shortly after Monday's opening, the third such pause in six sessions, as the benchmark S&P 500 index plunged more than 7 percent, triggering an automatic cutout.

The slide came despite intensified efforts to protect the economy from the impact of the coronavirus outbreak. The Federal Reserve on Sunday cut its benchmark interest rate by a full percentage point to near zero and pledged to boost its bond holdings by at least 700 billion U.S. dollars.

A sharp cut in interest rates by the central bank ahead of schedule and its pledge of massive asset purchases added to the alarm that the virus has paralyzed supply chains and squeezed company revenue, experts noted.

"So far markets are not convinced that such measures will be sufficient to prevent a sharp rise in bankruptcies and unemployment," UBS Global Wealth Management's Chief Investment Officer Mark Haefele said in a note on Monday.

The stimulus was accompanied by further economically damaging measures aimed at slowing the spread of the epidemic, such as travel restrictions and the closure of bars, restaurants, and theaters in several big cities.

Meanwhile, the virus continues to spread. The number of COVID-19 cases in the United States topped 4,000 as of 1700 GMT on Monday, according to the Center for Systems Science and Engineering at Johns Hopkins University. The fresh figure reached 4,068 with 69 deaths.

"Governments have started to announce the sort of targeted fiscal policies that the market is looking for -- aimed at helping viable businesses survive the crisis. But to reassure markets in the absence of better news on the spread of the virus, we may need to see a more open-ended commitment from governments to assist companies and individuals facing cash flow problems arising from the COVID-19 outbreak," Haefele noted.

Monday's losses put the Dow down about 31.7 percent from its all-time high and the S&P 500 and Nasdaq more than 29 percent below their records last month.

Monday's market sell-off was widespread. Oil prices declined significantly as market participants were worried that the continued spread of the coronavirus would further dent global demand for crude.