The COVID-19 pandemic is raging worldwide. At such a critical moment, some Western critics have neglected to concentrate their efforts on the epidemic fight. On the contrary, they keep pointing fingers at China, which has progressively curbed the virus' further spread domestically owing to its efforts and sacrifices.

Facts speak louder than words. Xinhua reporters hereby piece together some of China's anti-virus actions to make the truth better known to the public.

COVERING UP OR TRANSPARENT UPDATES

The ravaging pandemic is a major test for all countries. Faced with the novel coronavirus, people can only look for solutions through constant exploration and experimentation.

China's responsible actions can be considered to have sent early warning signals to the world. China acted at the earliest possible time to report the outbreak to the World Health Organization (WHO), share the genome sequence of the virus with the rest of the world, and engage in international cooperation. 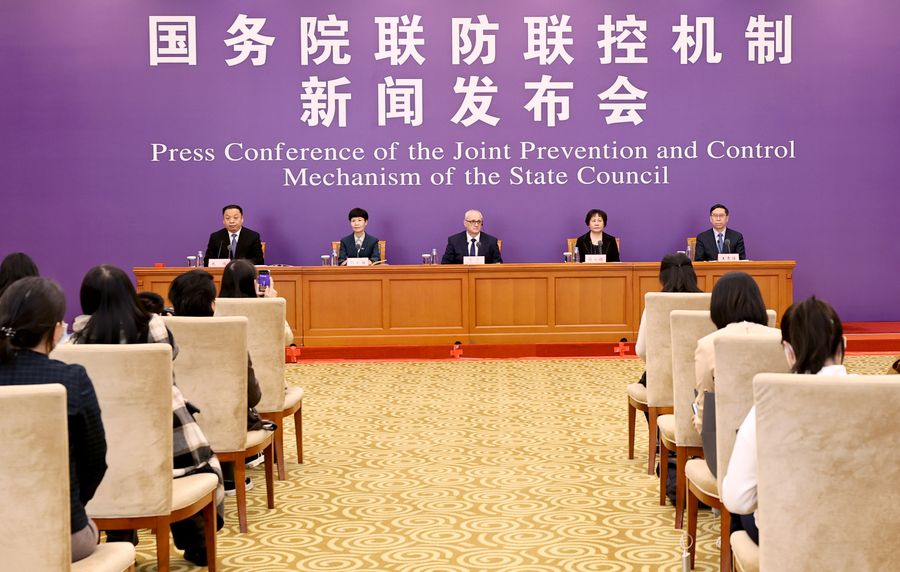 Photo taken on April 7, 2020 shows a press conference of the joint prevention and control mechanism of the State Council in Beijing, capital of China. World Health Organization (WHO) Representative in China Gauden Galea expressed gratitude to nurses on the frontlines of the fight against COVID-19 at the press conference. (Xinhua/Chen Jianli)

Since the outbreak, the Chinese government has released information about the epidemic in a timely, open and transparent manner, and actively responded to concerns of all sides.

China's regular sharing of information about the outbreak with the WHO, relevant countries and regions and China's Hong Kong, Macao and Taiwan began on Jan. 3, 2020. Also starting Jan. 3, China began to inform the United States of the outbreak and response measures on a regular basis.

On Jan. 11, the Chinese Center for Disease Control and Prevention uploaded five whole genome sequences of the novel coronavirus on its website and shared data with the world.

And under China's joint prevention and control mechanism of the State Council, a press conference has been held every day since Jan. 27. 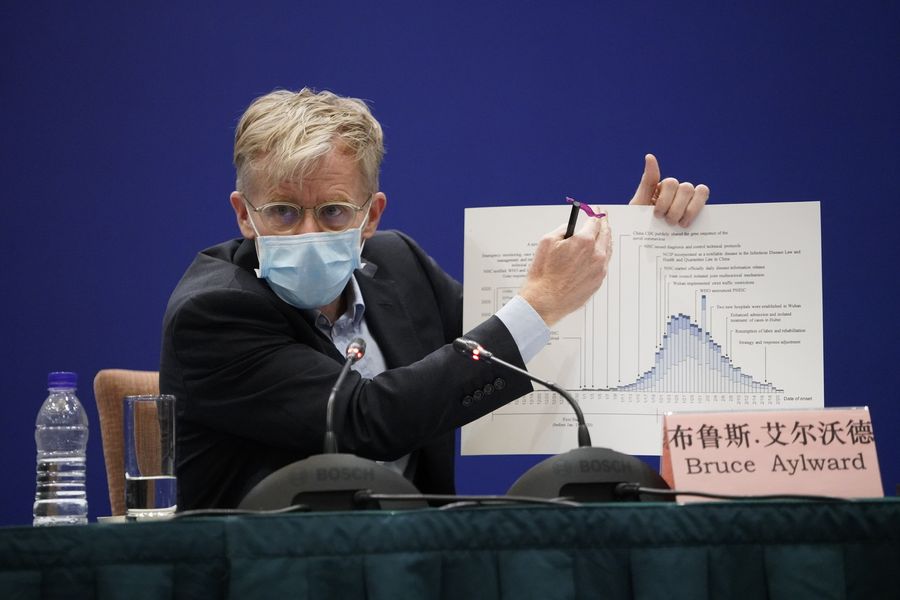 Bruce Aylward, an epidemiologist who led an advance team from the World Health Organization (WHO), speaks during a press conference of the China-WHO joint expert team in Beijing, capital of China, Feb. 24, 2020. (Xinhua/Xing Guangli)

The China-WHO joint expert team in February conducted a nine-day field visit in China. Team members said China's public health responses to the outbreak have yielded notable results in slowing the spread of the epidemic.

"In many ways, China is actually setting a new standard for outbreak response. It's not an exaggeration," WHO Director-General Tedros Adhanom Ghebreyesus said at a press conference on Jan. 30 after the organization announced the outbreak was a Public Health Emergency of International Concern.

Dr. Anthony Fauci, the medical expert leading the White House effort to contain the coronavirus, said in an interview with the journal Science published on March 22 that he refused to let others push him to say that China should have warned the United States three months beforehand, because it just does not comport with facts.

China has made all-out efforts to fend off the "first wave" of the virus since the outbreak.

Wuhan, the Chinese city hardest hit by the virus and capital of central China's Hubei Province, underwent a 76-day lockdown, which was ended on April 8 after new infections have been drastically reduced across China. 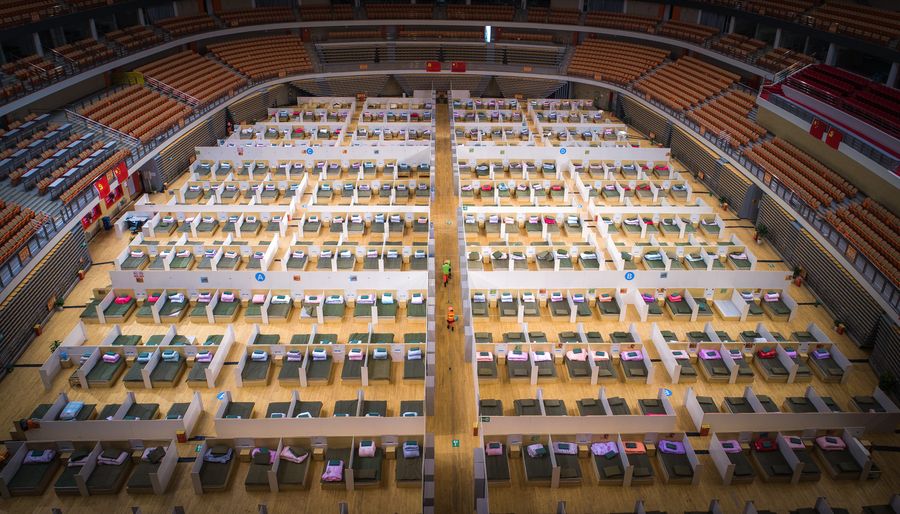 During the months-long combat, two emergency hospitals with a total of 2,600 beds were built from scratch in Wuhan within about two weeks, and 16 temporary hospitals were converted from gyms and exhibition centers to add 13,000 beds. More than 42,000 medical staff, including those from the military, were dispatched to Hubei from across the country. At the peak of the fight, one in 10 intensive care medics in China were working in Wuhan. 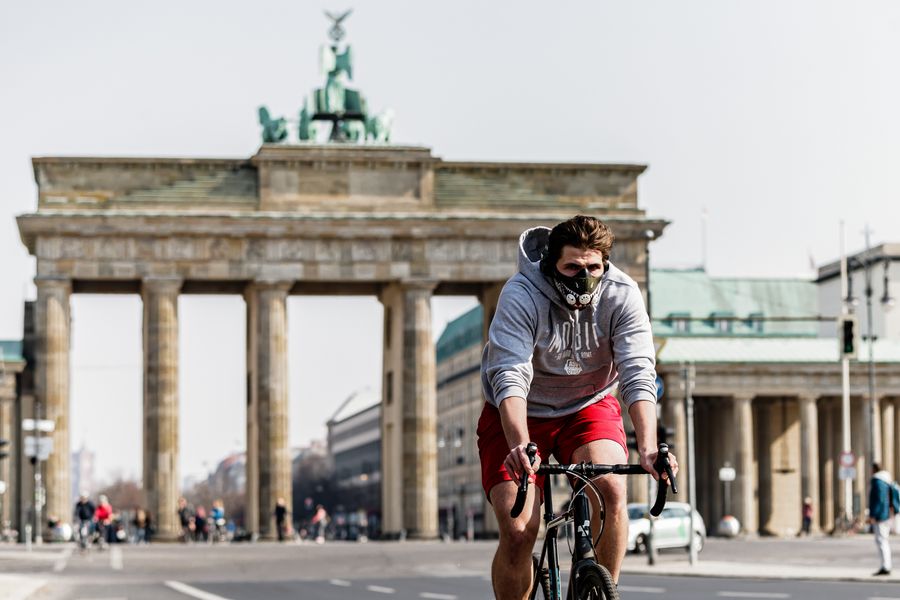 A bicyclist wearing a face mask is seen near the Brandenburger Gate in Berlin, capital of Germany, March 28, 2020. (Photo by Binh Truong/Xinhua)

Recently the journal Science published a paper by researchers in the United States, Britain and China. The report believes China's control measures worked by successfully breaking the chain of transmission and bought other cities valuable time.

It is regretful that while the situation in China is moving steadily in a positive direction now, the United States and Europe have become the latest epicenters of the pandemic. Some experts shared the view that the nearly two-month time window won by China was squandered by some countries' politicians because of misjudgment and insufficient preparation.

Richard Horton, editor-in-chief of The Lancet medical journal, said in March on the BBC that "the message from China is absolutely clear... we wasted February when we could have acted... it is a national scandal."

Some Western critics are inclined to claim that China is using the anti-virus assistance to manipulate public opinion, or turning the pandemic into a geopolitical tool to raise its influence.

"Do they want China to sit idle and do nothing while other countries are braving the pandemic? Or do they think that they can do more and better than China?"

Just as Chinese Foreign Ministry spokesperson Hua Chunying said, "in the face of the pandemic, to help others is to help yourself." 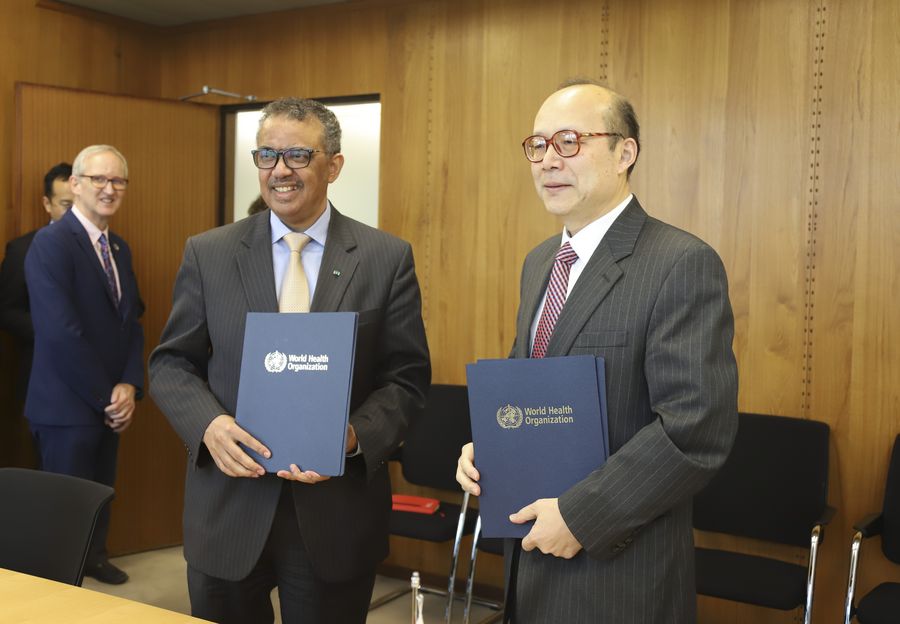 World Health Organization (WHO) Director-General Tedros Adhanom Ghebreyesus (2nd R) poses for a photo with Chen Xu (1st R), China's permanent representative to the United Nations Office at Geneva, after signing an agreement on China's donation of 20 million U.S. dollars to the WHO for cooperation in dealing with the novel coronavirus epidemic, in Geneva, Switzerland, on March 10, 2020. (Xinhua/Liu Qu)

China announced a donation of 20 million U.S. dollars to the WHO on March 7 to support its international cooperation in the anti-virus fight. 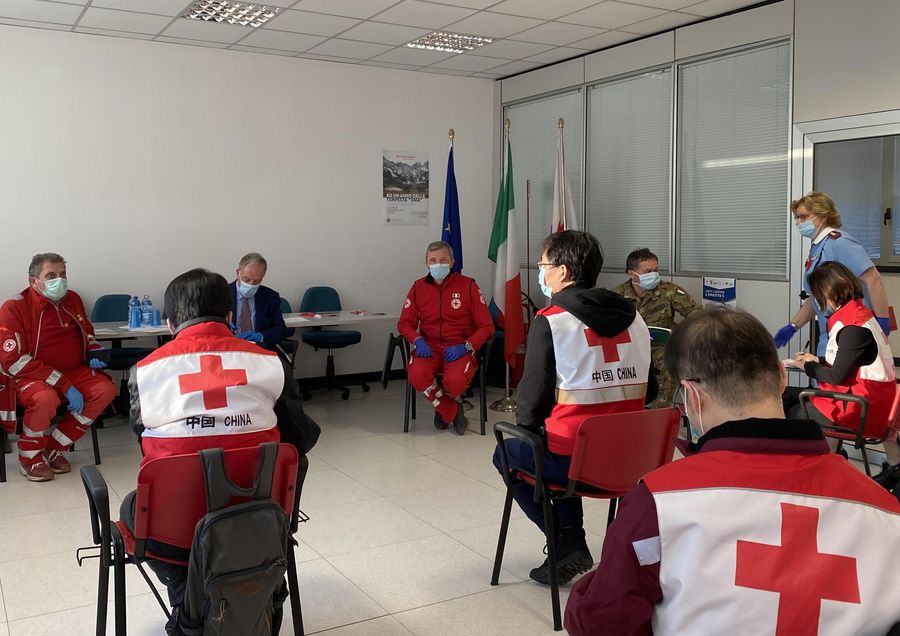 Incomplete statistics show that China has held video conferences for experts with more than 100 countries as well as international organizations. Participants all spoke highly of the open, transparent, information-rich and professional virtual meetings, where Chinese experts shared everything within their knowledge which their foreign counterparts can learn from. 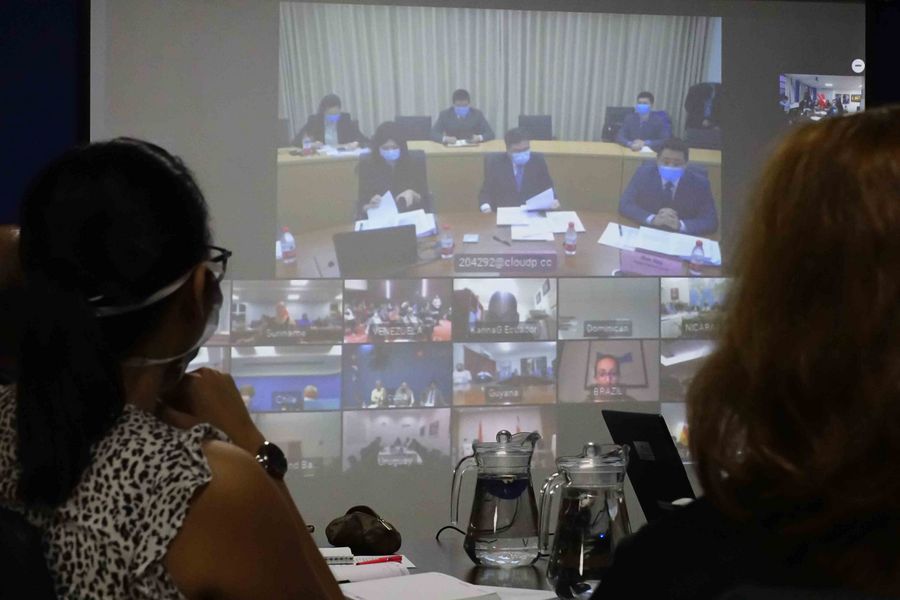 Photo taken on March 23, 2020 shows the venue of an online meeting on COVID-19 pandemic prevention and control among representatives from China and Latin American and Caribbean countries in San Salvador, El Salvador. (Photo by Alexander Pena/Xinhua)

In addition, China has released the seventh version of its diagnosis and treatment protocol and sixth of prevention and control protocol. With the protocols translated into many foreign languages, China is sharing them with the WHO and the international community.

"With people's future linked together, countries can only overcome the challenge by standing in solidarity," said Foreign Ministry spokesperson Geng Shuang.

The world body appreciates China's sharing of experience in epidemic prevention and control with developing countries and the provision of such valuable assistance as medical supplies, vaccines and medicines, said UN Secretary-General Antonio Guterres on March 12.

LINING ITS OWN POCKETS OR AROUND-THE-CLOCK WORK

Does Beijing attempt to "exploit the pandemic for economic gains"? Facts show that even if China itself still shoulders the control task at home, it offers assistance within its capability to other countries affected by the pandemic, regardless of its gains and losses.

For instance, under current circumstances, several countries are in urgent need of masks, Chinese companies are running at full steam around the clock to meet these needs. China's daily output of face masks reached 116 million units as of Feb. 29, 12 times the figure reported on Feb. 1. 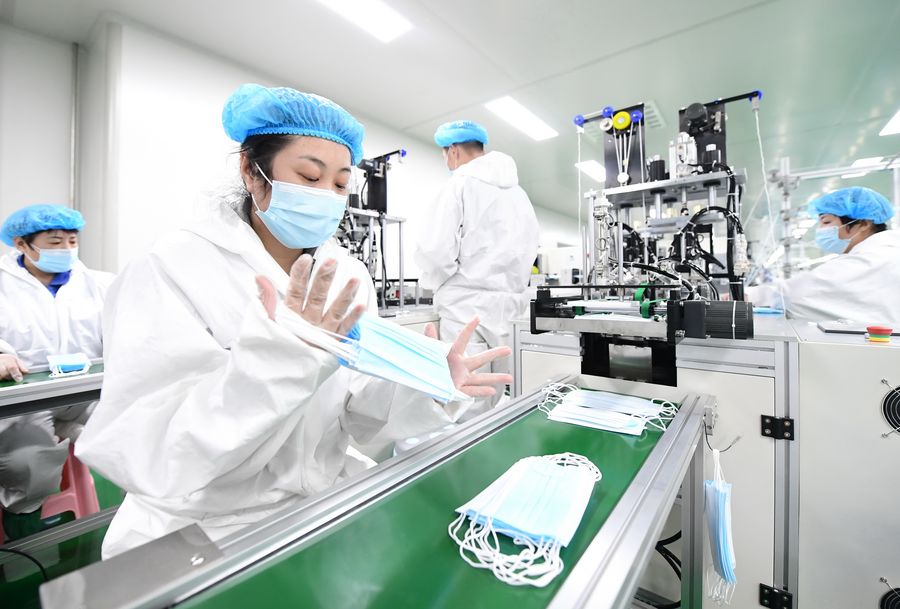 While many Chinese enterprises are working to fulfill internal and overseas demand, distorting reports about low quality or "fake" Chinese medical supplies have been confusing the public.

Reports claimed that the Dutch Ministry of Health recalled a batch of masks purchased from China "due to quality problems." A preliminary investigation showed that the Chinese company had informed the Dutch side that the masks are non-surgical masks before shipment.

In addition, some Slovak officials questioned the reliability of the quick coronavirus test kits purchased from China. According to the preliminary conclusion, the Slovak medical workers used these antigen test kits incorrectly with a preceding method applicable to nucleic acid testing, which led to the inaccurate results. China's embassy in Slovakia then issued a reminder on the correct use of different testing methods.

"Ninety percent plus of the millions of pieces of face masks and protective gear and test kits that are going out to the world from China are perfectly great, but they're writing articles about the small percentage that happened to be defective," Mario Cavolo, an Italian American writer living in China, told media.

People should also be aware that China recently has rolled out more rigorous regulative measures to ensure the quality of medical supplies exports, and producers of substandard medical supplies should be punished according to law.

Since the outbreak of COVID-19, China has introduced the unprecedented lockdown of a metropolis at the center of the outbreak, applied stringent quarantine measures across the country and pulled extensive resources into hard-hit areas.

Some people may be concerned that China's steps were "excessive." As a matter of fact, when people's lives are in peril, discussing how to protect human rights is nothing but empty talk. 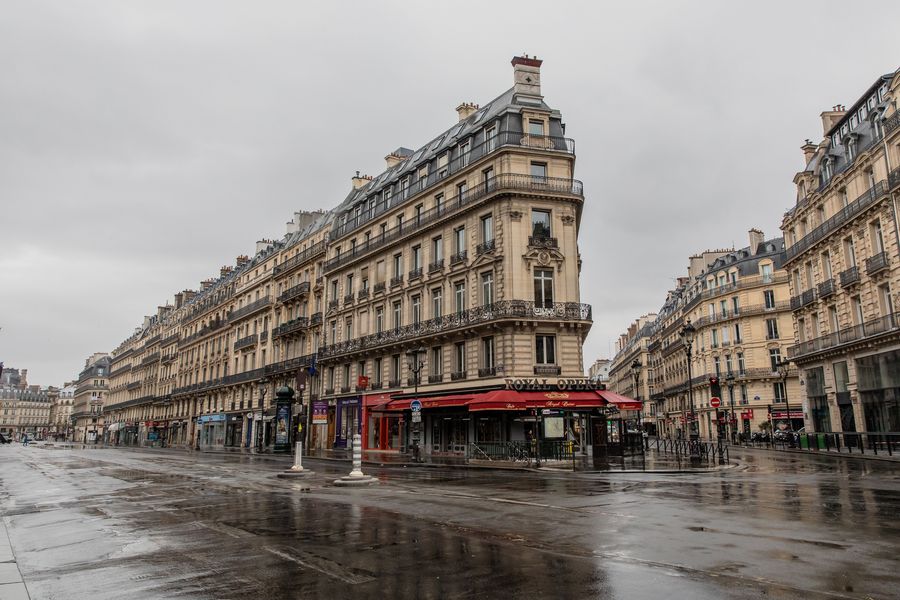 The streets are almost empty in Paris, France, April 6, 2020, on the twenty-first day of a strict lockdown in France to stop the spread of COVID-19. (Photo by Aurelien Morissard/Xinhua)

A growing number of countries have found China's response effective and are now modeling their own containment efforts after China's. For example, many European countries have extended their lockdown periods, tightened social restrictions and upgraded social distancing measures to slow down the spread of the virus.

Furthermore, on the basis of medical insurance, the government pays for the treatment, to prevent any infected person from being denied treatment due to concerns over cost.

The journal Science called the scale of China's anti-virus offensive "unprecedented" in a recent study, and calculated a 96-percent reduction of potential infections directly attributable to the actions of the Chinese government.

Reports highlighted that some foreigners were complaining about discrimination in China, and people are keen to know the truth.

Since the outbreak, relevant departments and local governments in China have made every effort to meet the living, epidemic control and medical needs of foreign citizens, and provided timely treatment to those infected with the COVID-19 coronavirus in China. 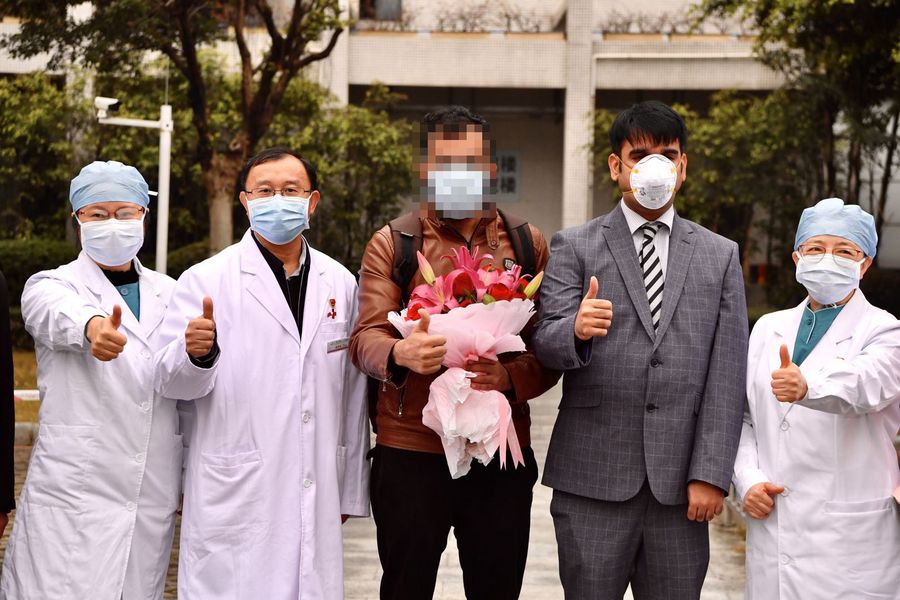 Many foreign citizens volunteered to join the ranks of China's anti-virus fight, leaving touching stories of people tiding over difficulties together.

In view of the rapid spread of COVID-19 across the world, China has decided to temporarily suspend the entry into China by foreign nationals holding visas or residence permits still valid to the time of the announcement, effective from 12:00 a.m., March 28, 2020, said a statement jointly released by the Chinese Foreign Ministry and the National Immigration Administration on March 26.

"The suspension is a temporary measure that China is compelled to take in light of the outbreak situation and the practices of other countries," said an official statement, adding that the entry of foreign nationals with visas issued after this announcement will not be affected, and the measures will be calibrated in light of the evolving situation.

"We always treat foreign nationals and Chinese citizens alike... We do not increase or reduce certain regulations on someone just because they are foreign citizens," according to Chinese Foreign Ministry spokesperson Geng Shuang.