-- China has vowed to finish building a moderately prosperous society in all respects and win the battle against poverty in 2020, according to a government work report.

-- Priority for this year will be given to stabilizing employment and ensuring living standards, with the report unveiling detailed targets, policies and measures.

-- In light of great uncertainty resulting from the COVID-19 pandemic and the global economic and trade environment, China has set no specific target for economic growth for 2020.

Despite unprecedented challenges caused by the COVID-19 pandemic, China has vowed to finish building a moderately prosperous society in all respects and win the battle against poverty in 2020, the country's long-anticipated milestones.

China has both the resolve and the ability to accomplish the targets and tasks set for this year, according to a government work report delivered on Friday at the opening of the third session of the 13th National People's Congress (NPC), the national legislature. 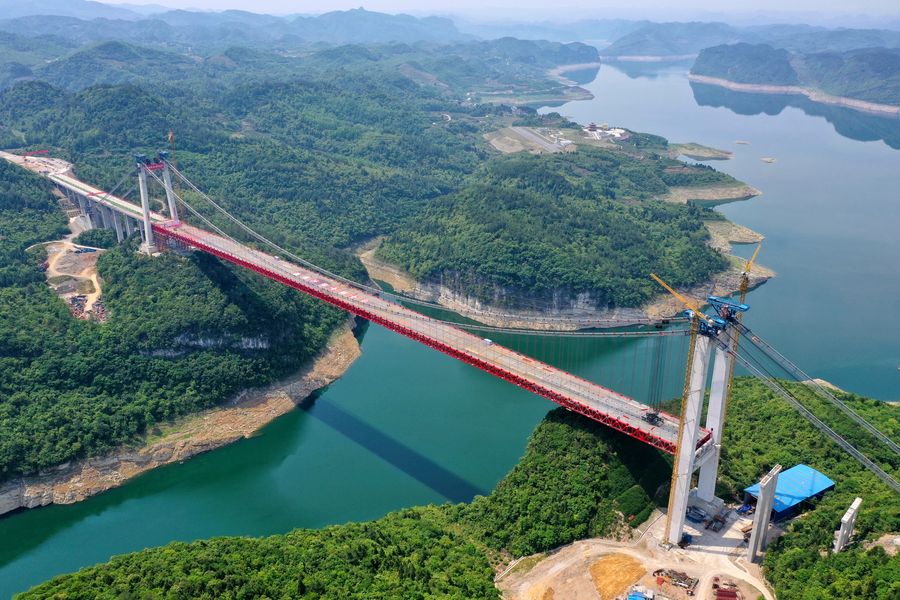 Aerial photo taken on April 29, 2020 shows the Feilonghu Wujiang River Bridge under construction in southwest China's Guizhou Province. The bridge is a key project of the Zunyi-Yuqing expressway. (Xinhua/Liu Xu)

"At present and for some time to come, China will face challenges like never before," Premier Li Keqiang said while delivering the report to the opening meeting, which was postponed due to the COVID-19 epidemic.

"However, we have unique political and institutional strengths, a strong economic foundation, enormous market potential and hundreds of millions of intelligent and hardworking people," Li said.

"If we face challenges head-on, boost confidence in development, create strong impetus for growth, and preserve and make the most of this important period of strategic opportunity for our development, we will, without doubt, be able to make it through this challenging time," Li said. "The horizons for China's development are full of promise."

China had accomplished main targets and tasks for 2019 against external and domestic challenges, laying a crucial foundation for building a moderately prosperous society in all respects, according to the report.

Priority for this year will be given to stabilizing employment and ensuring living standards, with the report unveiling detailed targets, policies and measures.

China aims to add over 9 million new urban jobs in 2020 and keep the surveyed urban unemployment rate at around 6 percent. The country will ensure the elimination of poverty among all rural residents living below the current poverty line and in all poor counties.

The report's resolution to deliver on the development milestones has encouraged people across sectors, as national lawmakers saw the detailed targets as practical guidance.

"We have the confidence to lift our county out of poverty despite obstacles," said Adili Abdurazaq, a national lawmaker from northwest China's Xinjiang Uygur Autonomous Region, who runs a rose planting and processing company in south Xinjiang's Yutian County, one of the country's poorest counties.

The practical plans mentioned in the report, especially measures to ensure employment and the people's well-being, felt very inspiring, he said.

A staff member from a company communicates with a job applicant at a job fair in Wuhan, central China's Hubei Province, April 21, 2020. (Xinhua/Xiao Yijiu)

In light of great uncertainty resulting from the COVID-19 pandemic and the global economic and trade environment, China has set no specific target for economic growth for 2020.

The shock of the COVID-19 pandemic has sent the world economy into a severe recession, disrupted industrial and supply chains and caused a contraction in international trade and investment as well as volatility in commodity markets, said the report.

Not setting a specific target is expected to help China concentrate on keeping the fundamentals of the economy stable, thus contributing to building a moderately prosperous society in all respects.

In effect, China has incorporated the growth target into other policy goals, including financial and monetary ones, He Lifeng, head of the National Development and Reform Commission, told reporters Friday via video link on the sidelines of the NPC session.

He expected China to basically reach all the 25 sub-targets toward completing the building of a moderately prosperous society in all respects this year, of which GDP is one anticipatory goal. He noted that even a 3-percent economic growth rate can put China very close to its target of doubling the 2010 GDP by the end of 2020.

Analysts said that putting headline GDP growth targets on the back burner is a move of practical significance to the country's long-term growth, as it is only one of the many fundamentals of economic prosperity.

In the past three decades, China's GDP growth targets have varied based on the social and economic realities at the time, said Wen Bin, chief analyst at China Minsheng Bank.

The country has seen different types of growth targets since 1990, including fixed figures, ranges, approximate figures and, for the three years between 2000 and 2002, non-numerical ones, said Wen.

"To move away from the fixation on headline GDP is not to deny the importance of economic growth altogether," Wen told Xinhua.

Instead, it allows China to pay more attention to other causes vital to high-quality development, including structural reform and industrial upgrading, said Wen.

It could also reduce the likelihood of governments at various levels resorting to drastic short-term policy incentives that may trade potential for immediate effect or cause debt risks, said Lu Ting, chief China economist with Nomura. 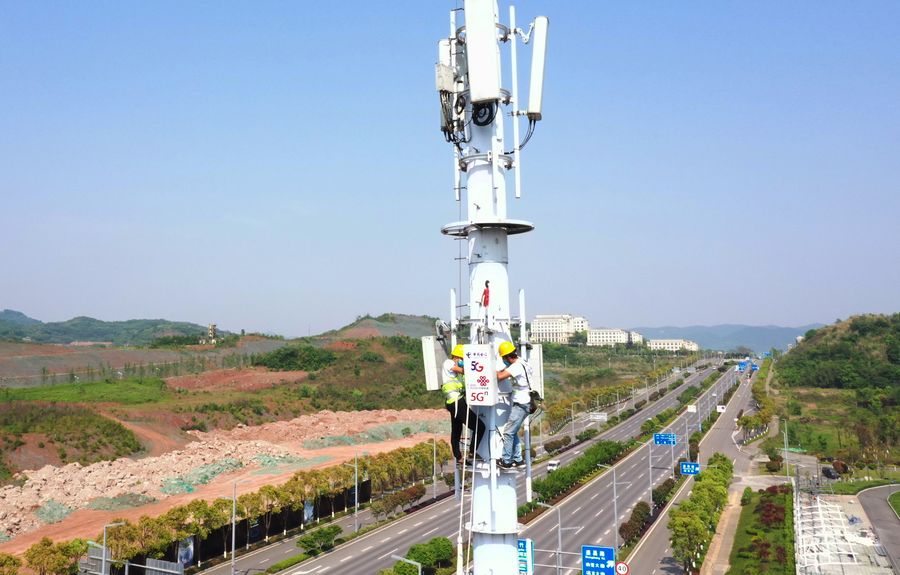 Aerial photo taken on April 15, 2020 shows people working at the construction site of a 5G base station in Chongqing, southwest China. (Xinhua/Wang Quanchao)

Yang Yuanqing, a national lawmaker and Lenovo Group's chairman and CEO, said China has shown flexibility by adopting the "out-of-the-box" decision to drop a specific GDP growth target amid the current circumstances.

The epidemic has seen the stellar development of new business and consumption models in China, such as online education and telework, injecting new momentum into economic revival, he said.

China's economy features strong resilience and enormous potential in terms of consumption, digital economy and new infrastructure, Yang said, noting that the severe challenges call for faster economic transformation and upgrading set to be boosted by the newly-unveiled measures.

After making painstaking efforts and enormous sacrifice, China has turned the tide on the virus and protected the lives and health of its people. The world's second-largest economy has gradually reopened factories and businesses as the epidemic continued to recede, adding impetus to global economic recovery.

The resilience of the Chinese economy may appear stronger than other major economies and the global economy as a whole, which were caught off-guard by the fallout of a ravaging pandemic and had to scramble for effective countermeasures.

China, as the report noted, will blaze a new path of shock-resilience and positive growth cycles which will center on stabilizing employment, energizing the market, stimulating demand and achieving stable growth.

To that end, China will pursue a more proactive and impactful fiscal policy, setting its fiscal deficit above 3.6 percent of GDP and issuing 1 trillion yuan of government bonds for COVID-19 control to release more funds for companies and individuals.

The government will spur demand through effective investment in areas like new infrastructure as well as allocating more special local government bonds.

Analysts expect such efforts to keep economic fundamentals stable to help build a solid foundation for economic recovery as the epidemic wanes.

Nomura estimates economic growth to rebound to around 5.8 percent in the third and fourth quarter of the year, while Wen puts growth projection for 2020 at between 3 percent and 5 percent on hopes that policy incentives will boost consumption and beyond.

China's economy is expected to grow by 9.2 percent in 2021, according to an International Monetary Fund report released in mid-April. The report projected the world economy to contract by 3 percent this year amid the worst recession since the 1930s.