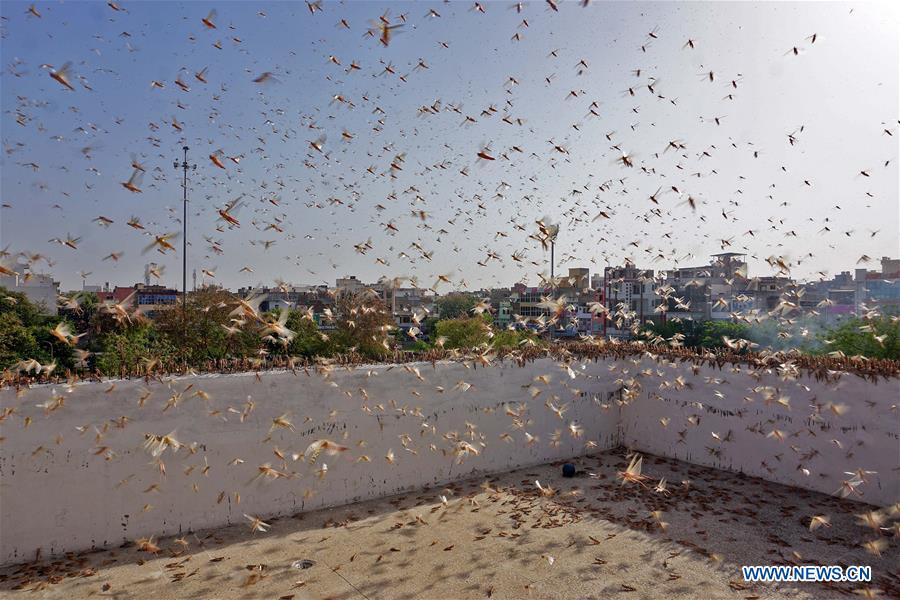 Photo taken on May 25, 2020 shows swarms of locusts in the residential areas of Jaipur, the capital city of India's western state of Rajasthan. India's federal Ministry of Agriculture and Farmers' Welfare has stepped up locust control operations as the swarm outbreak has spread to five states -- Rajasthan, Punjab, Gujarat, Madhya Pradesh and Maharashtra, officials said Thursday. (Str/Xinhua)

The local government in India's capital Delhi on Thursday issued an advisory on preventive measures to control a possible locust attack in its territory.

The advisory calls for organizing awareness programs for the public and farmers to prevent the probable attack of swarms of locusts in the national capital territory (NCT) of Delhi.

It said that since the swarms usually fly during the day and rest at night, they should not be allowed to rest.

"As the swarm of locusts flies in daytime, and rests during the night, it should not be allowed to rest at night," reads the advisory issued by Development Commissioner of Delhi. "Concerned authorities may carry out spraying of insecticide, pesticide as per need during the night."

Meanwhile, a local minister Gopal Rai also convened a meeting at his residence to discuss preparations to meet the locust threat.

Reports said Delhi's forest department is considering covering the saplings in its nurseries with polythene to protect them against the locust attack. The federal government has stepped up measures to control the outbreak.

Locust is a short-horned grasshopper of migratory habit, which attacks crops or green vegetation, causing extensive damage due to its feeding behavior.

Officials said the locust swarms usually enter the scheduled desert area of India through Pakistan for summer breeding in the month of June and July with the advent of monsoon. But the incursions of locust hoppers and pink swarms have been reported much earlier this year.