New York City will be under a curfew on Monday night to curb violent protests following the death of black man George Floyd, according to a joint statement by Mayor Bill de Blasio and New York State Governor Andrew Cuomo on Monday.

"While we encourage people to protest peacefully and make their voices heard, the safety of the general public is paramount and cannot be compromised," said the governor in the statement. 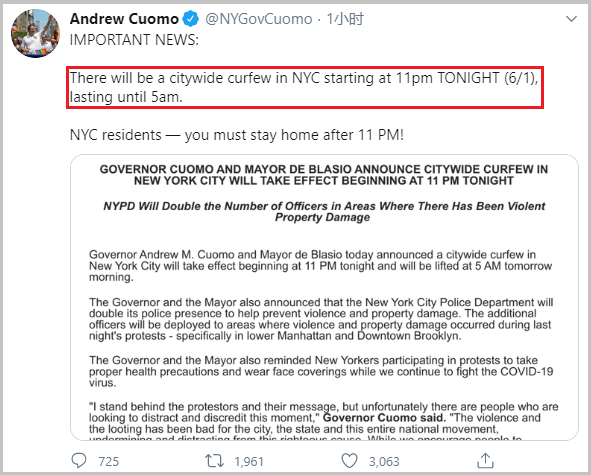 A screengrab from New York Governor Andrew Cuomo's Twitter account shows that he tweets on June 1, 2020, "There will be a citywide curfew in NYC starting at 11:00 p.m. TONIGHT (6/1) lasting until 05:00 a.m." and demonstrates the text of his joint statement with New York Mayor Bill de Blasio about the curfew. (Xinhua)

Cuomo and de Blasio also announced that the New York City Police Department (NYPD) will double its police presence in all five boroughs to help prevent violence and property damage during demonstrations.

They also urged protesters to cover their faces as the city remains the epicenter of the COVID-19 pandemic.

"I support and protect peaceful protest in this city. The demonstrations we've seen have been generally peaceful. We can't let violence undermine the message of this moment," said de Blasio in the statement.

Some 40 cities across the United States have imposed curfews to curb acts of violence in extensive demonstrations against police brutality and racism.

Earlier on Monday, de Blasio said at his daily briefing that he is planning to talk with other officials on a potential curfew in the nation's largest city.

Over the past four days, some 1,000 protesters were arrested in New York City for looting, attacking police or vandalism, among other acts.

More than 40 police officers have been injured since Thursday, none with serious injuries, according to NYPD officials.

Meanwhile, the NYPD is also under criticism due to some seemingly excessive moves in several encounters with the protesters, such as accelerating their cars while being surrounded by crowds of people.

The mayor said in the statement that he had talked to NYPD Commissioner Dermot Shea about the incidents in recent days "where officers didn't uphold the values of this city or the NYPD," adding that the commissioner would elaborate on how officers will be held accountable later.