The passengers were seen off by Consul General Hussain Haider, officers and staff of Pakistan Consulate in Shanghai. 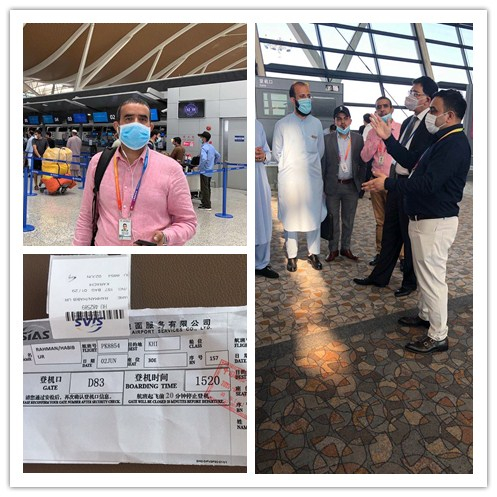 Talking to China Economic Net, Consul General Shanghai Hussain Haider, said that the return of Pakistanis is the first priority of the government and the embassy. We are very much thankful to the Chinese who took care of our citizens like their own during the epidemic.

The Consulate also reviewed the steps taken at the airport to protect passengers from any harm of the virus.

The stranded Pakistanis thanked the Pakistan government for arranging their deportation to the homeland.

“Thank you everyone who worked for us, we are thankful to everyone who has consumed their precious time for us,” said a passenger, Abdul Qadir.

Talking to China Economic Net, a passenger named Qazi Sanaullah said Chinese government helped us and attended us like their own people.

“We did not face any problem in boarding. It was very smooth and easily, before purchasing ticket it was mandatory for passengers to check and confirm their Corona test results are negative”, he added.

Earlier, PIA flight has reached Shanghai at 3:00 PM local time, carrying stuck Pakistan embassy officials that were granted special permission to come back to China. It may be noted that, PIA was allowed by the Chinese authority to operate direct flights to Shanghai to airlift Pakistani citizens.

The first special PIA flight boarded 274 Pakistani citizens mostly students from Wuhan city in China went back in Islamabad on 18th May.