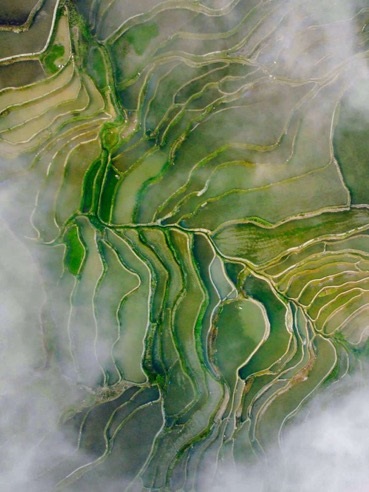 A scene from  Aerial China. [Photo provided to China Daily]

As the first series of its kind to shoot all its scenes from a bird's-eye view via helicopter or drone, the hit documentary show Aerial China will be translated to various languages for airing overseas, according to producers at a recent seminar in Beijing.

Its third season, Join Us to Fly, has been watched by nearly 360 million people, with young viewers aged between 15 and 24 surging 36 percent compared to last season, said Liang Hong, deputy head of the film and TV documentary center of China Media Group.

The documentary, produced by the center, features 23 provinces, autonomous regions and municipalities in the first three seasons, and will turn the lens to 10 other provincial-level administrative regions in the fourth, including Henan province, the Guangxi Zhuang autonomous region and Beijing.

Liang said the fourth season has recently begun production, and will demonstrate the country's rich civilization and ecological diversity as well as its natural beauty.

Xue Jijun, a member of the editorial board of China Media Group, said the third season has become a hit, generating a great deal of homesickness in audiences.

As of May 31, the third season, also released online, has earned nearly 19 million "clicks" on streaming sites Tencent Video and Bilibili, drawing around 1 million regular viewers.

It also earned 9.5 points out of ten on Douban and 9.9 points on Bilibili, exemplifying its popularity among young audiences on the first day when the third season was broadcast.

Yu Le, the chief director, said at the seminar the third season was filmed by over 300 crew members taking over 400 flights in 18 helicopters, in addition to 118 drones.

"The third season hit new records in terms of the number of crews and facilities, as well as the amount of video clips," Yu said. "We've tried our best to provide audiences a visual experience which also features humanistic feelings."

Tang Jun, a researcher at Fudan University, said the documentary uses a distinctive perspective to display the beauty of China, which also demonstrates the people's confidence in their own culture and history.

He Suliu, director of the documentary research center at the Communication University of China, said the third season injects a sense of romance, highlighting the relationship between nature and humankind.