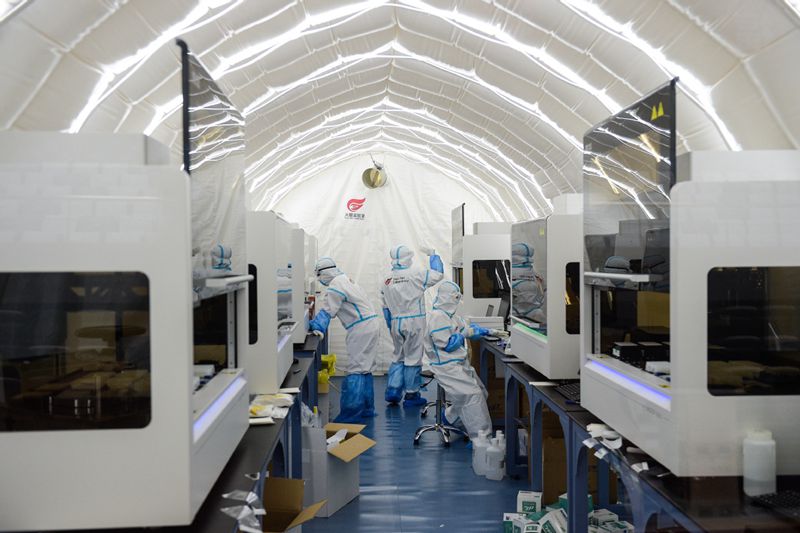 Workers assemble a portable lab for nucleic acid tests at a sports center in Beijing's Daxing district on Monday. The lab is designed to process 10,000 samples a day. [PENG ZIYANG/XINHUA]

Beijing has effectively kept the coronavirus outbreak from spreading and new local cases are decreasing as the capital uses multiple measures to reduce infections, a senior municipal official said on Monday.

Beijing reported nine new cases on Sunday, a big drop from 22 cases a day earlier, and all of them were not permanent Beijing residents, the municipal health authority said on Monday. Two of the nine were a couple.

"Beijing has contained the spread of COVID-19 cases," Xu Hejian, spokesman for the municipal government, said at a news conference on Monday.

The epidemic may be showing signs of abating, he said, but added that the strict measures will remain in place because ending the outbreak remains a complicated task.

In the next step, Beijing will continue to implement the strict control and prevention network created in key areas such as restaurants, hospitals and schools. The city also will strengthen food safety controls and increase its nucleic acid testing ability, he said.

Wu Hao, a disease control expert from the National Health Commission, said Beijing is expected to see a big drop in new cases by the end of this week.

"If you control the source, and cut the chain of transmission, the number will have a cliff-like drop," he said in an interview with China Central Television on Sunday. "Beijing didn't choose to do a 'flood-type' lockdown like Wuhan earlier this year when we knew little about the virus."

Beijing has taken "more targeted lockdown procedures this time, which has set an example for other places for normalized virus prevention".

By 3 pm Monday, Beijing had designated four communities as high-risk and 39 as medium-risk for epidemic control. This represents targeted measures to contain the spread of the virus including locking down communities in high-risk zones.

Pang Xinghuo, deputy head of the Beijing Center for Disease Control and Prevention, reemphasized the importance of hand-washing and social distancing at Monday's news conference.

Three confirmed cases involved two Beijing construction sites, according to Beijing's Housing and Urban-Rural Development Commission. Work at the two sites has been suspended and they were closed off.

The city had screened 1,622 workers－including through nucleic acid testing－at 435 construction projects citywide by Sunday, said Ding Sheng, deputy head of the commission. Of that number, 743 of the workers had been to Xinfadi market, which is linked to all local cases, and 879 of them were close contacts of people with ties to the market.

"June is a busy month for the construction industry. But the commission will take strict measures to reduce the density of workers at sites and strengthen health monitoring to prevent the virus from spreading," he said.

Faced with a sudden outbreak, Beijing has been increasing its testing capacity and hospitals have quickly increased beds and added medical facilities.

As of Saturday, about 2.3 million people in the capital had been tested for the novel coronavirus, the Beijing Health Commission said.

Construction of a temporary testing center was completed on Sunday night, and it was put into operation on Monday at Peking Union Medical College Hospital in Beijing.

The testing center, which took only 70 hours to build, has eight rooms for taking samples for testing, four diagnosis rooms and two comprehensive service rooms, which will raise the testing ability of the hospital and reduce the risk of spreading infections among patients.