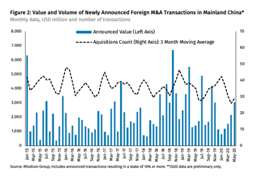 According to the report, the United States, Europe and Asia are concerned about a distressed asset buying spree by Chinese companies as the COVID-19 outbreak has slammed deal-making in both directions this year. Many governments enacted policies ¨C some temporary, some permanent ¨C to shield their companies from Chinese takeovers.

However, several months into the pandemic, the data tell a different story about cross-border M&A trends. There are no signs of a Chinese outbound investment boom, like the one seen after the global financial crisis a decade ago. Instead, takeovers are headed in the other direction: into China.

As global uncertainty escalates, more foreign companies are buying into China, including deals in industries of finance and technology. And ˇ°recent deals offer clues about what is driving foreign appetite for Chinese assets.ˇ±

As per Rhodium, Chinese consumption, policy liberalization, Chinese firmsˇŻ becoming leaders in some industries (through entrepreneurialism, industrial policy and other means) are attractive for foreigners to buy technology and industrial assets rather than build from scratch, listing examples like PepsiˇŻs $700 million acquisition of Chinese snack brand Be & Cheery, JP MorganˇŻs acquiring full control of its Chinese mutual fund joint venture for an estimated $1 billion and VolkswagenˇŻs plans to acquire a 26% stake in Chinese battery maker Guoxuan High-Tech for $1.2 billion.

ˇ°Over the past 18 months, we have recorded levels of foreign M&A (mergers and acquisitions) into China that were not seen in the previous decade,ˇ± the report noted.

As Rhodium put it, the trends that have emerged over the first five months of 2020 offer some valuable insights for policymakers grappling with ChinaˇŻs role in global cross-border investment flows.

First, reduced FDI flows will be a global reality for some time and China is no exception; second, slowing Chinese outbound investment over the 2017-2020 period shows ChinaˇŻs rise as global investor is not inevitable, said the report.

ˇ°The pandemic is putting our systems to the test, increasing the role of the state in many economies and accelerating the deployment of investment screening tools to guard against foreign takeovers that could impinge on national security. That is natural and to some extent necessary,ˇ± the report said, ˇ°but it is important that governments do not go too far and end up undermining the dynamism and competitiveness of open market economies they are trying to protect.ˇ±

BACK TO TOP
Edition:
Chinese | BIG5 | Deutsch
Link:
About CE.cn | About the Economic Daily | Contact us
Copyright 2003-2020 China Economic Net. All right reserved
Foreign firms ramp up buying and capitalize in China despite COVID-19 and political tensions: Rhodium
Source:CE.cn | 2020-06-24 08:05
Share to
0