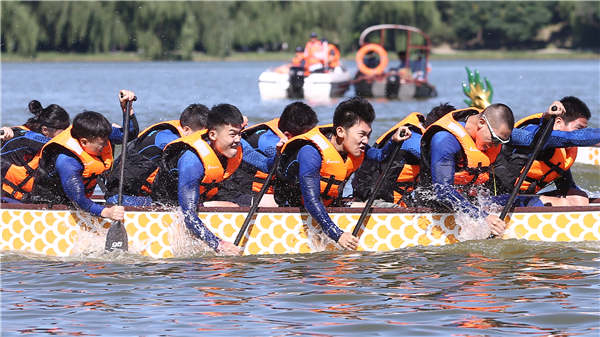 'Cloud festival' designed to prevent spread of infection from coronavirus

All events to celebrate the Dragon Boat Festival in the coming days in Beijing will be held online to control and prevent the spread of local COVID-19 cases, a senior official said on Tuesday.

Wang Jiequn, an official with Beijing's publicity department, said at a news conference on Tuesday that 32 websites are participating in the "cloud festival" activities this year with a theme of "health".

The three-day holiday for the festival will start on Thursday.

Faced with the epidemic, Xu Hejian, spokesman for the municipal government, said Beijing will continue strict management of travel and suggested that people not leave the city if it's not necessary. Those who need to go out of the city should have had negative tests for nucleic acids.

Among Monday's new cases, the youngest is 8 years old while the oldest is 57, according to Zeng Xiaopeng, director of the Beijing Center for Disease Control and Prevention.

All the cases are related to the Xinfadi wholesale market in southern Beijing's Fengtai district.

Another three cases from the soft-drink and snack-food giant PepsiCo Inc's food factory in Beijing were reported after eight employees of the company were confirmed as cases on Sunday.

Now with 11 cases, the company has suspended production and operation of the factory.

Another case reported on Monday is a deliveryman who works for the online catering platform Eleme. The 47-year-old delivered food for Eleme from June 1 to 17 with an average daily delivery of 50 orders from 7 am to 9 pm.

He was taken to a hospital on Sunday and was confirmed to have COVID-19.

A statement by Eleme on Tuesday said the company has suspended the work of those who had close contact with the man and sent them to designated quarantine sites.

It has also submitted data of the man's whereabouts over the past 20 days to local health authorities, the company said.

Beijing reported nine cases on Sunday, which was seen as a sign that the city's strict measures had contained the virus.

Feng Zijian, deputy director of the Chinese Center for Disease Control and Prevention, was quoted by China Central Television on Monday saying that it is close to the end of cases in Xinfadi based on the existing information.

"The epidemic is controllable since it was discovered in an early stage and controlled with strict, multiple measures," he said.

Li Fengqin, director of the microbiology lab at the China National Center for Food Safety Risk Assessment, said the novel coronavirus will not spread between foods, but food can be contaminated by the virus through packaging or processing.