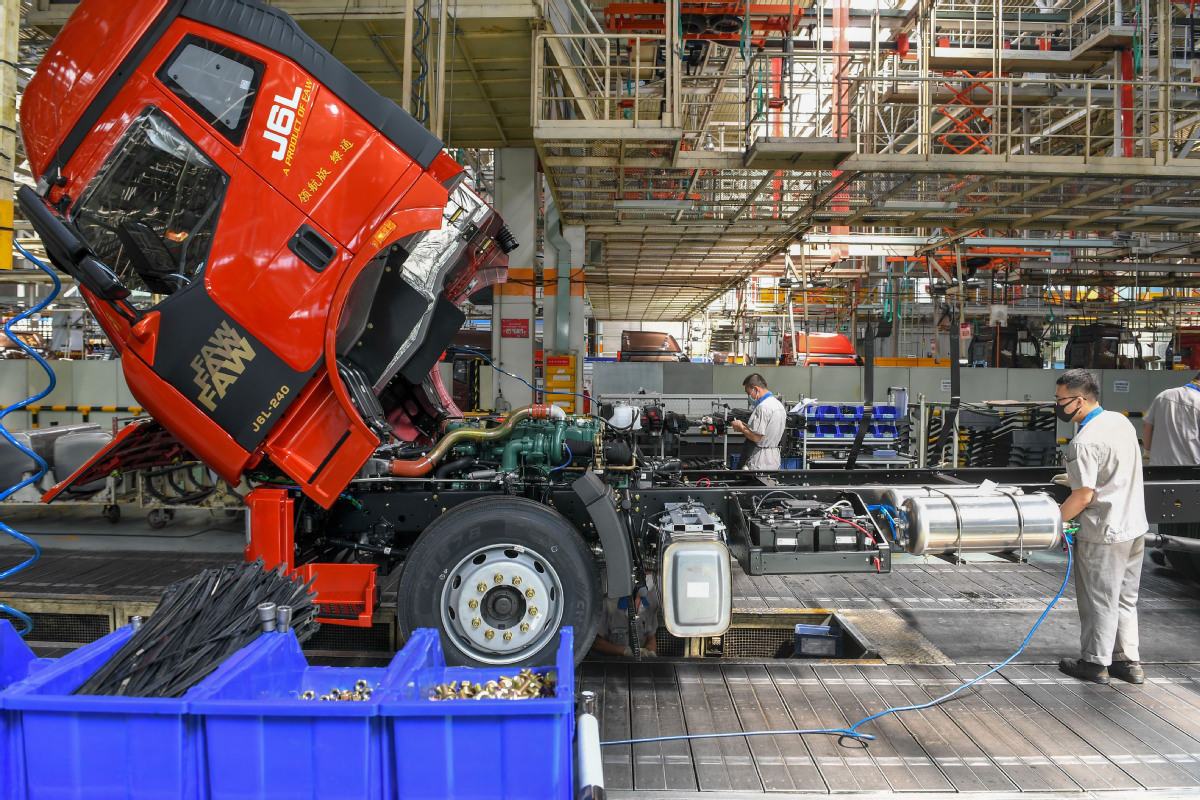 Employees of China FAW Group work on the production line of the carmaker in Changchun, Jilin province.[Photo by ZHANG NAN/XINHUA]

Mixed-ownership reform, digitalization and asset securitization will be the main planks of the upcoming three-year action plan for State-owned enterprises (2020-22), as they are powerful tools to adjust the structure of China's State-owned economy, experts said on Tuesday.

They made the remarks after the 14th meeting of the Central Committee for Deepening Overall Reform reviewed and approved the action plan late last month, according to information released by the State-owned Assets Supervision and Administration Commission of the State Council.

The next three years will be crucial for the country's SOE reforms, the meeting said, stressing efforts to optimize the layout and structure of the State-owned economy to make it more competitive, innovative, influential, and more able to withstand risks.

These outlines signify that the layout and structure of the State-owned economy will be adjusted around the goal of building a modern economic system in the future, said Wu Lianggang, a research fellow with the Beijing-based China Enterprise Reform and Development Society.

Wu said that the majority of SOEs will raise their investment in areas such as cloud computing, big data, artificial intelligence, the internet of things, mobile applications, integrated circuits, blockchain and other fields to continuously stay competitive, as digitalization has become a key driver for the Chinese economy.

The digital economy now accounts for more than a third of China's gross domestic product. China's Academy of Information and Communications Technology estimates that the nation's digital economy may reach 60 trillion yuan ($8.4 trillion) by 2025.

Affected by uncertainties such as COVID-19 and the global market's weak goods demand, the recent economic slowdown has led to debates on whether China can continue its high economic growth or if the country is heading toward stagflation. It is obvious that the country is currently facing more challenges than it has been at any other time over the past four decades, said Liang Jun, president of the Guangdong Association of State-owned Capital in Guangzhou.

Therefore the approval of the three-year action plan for SOEs indicates that the country is keen to enrich its economic development mode and further open its market, he said.

The mixed-ownership reform aims to allow shareholders from all backgrounds, including State, private and foreign investors, to invest in SOEs to reach a balanced shareholding structure and board representation. Its goal is to create a flexible and efficient market-oriented mechanism to improve management and profitability of SOEs, said Zhang Chunxiao, a research fellow at the National Academy of Governance.

He said Temasek Holdings, a government-owned entity in Singapore, can be a role model for policymakers in China to optimize its corporate governance mechanism via mixed-ownership reform. The Singaporean firm is guided by an independent board and operates autonomously on commercial principles.

Such a reform mode will facilitate major socioeconomic transformation and drive change in the competitive industrial landscape. Productivity adjustments at many SOEs over a short period of time will have a very positive effect on economic growth and the improvement of the economic environment, said Zhang Tianwei, chief investment officer at China Resources Capital, a subsidiary of China Resources (Holdings) Co Ltd, a Hong Kong-headquartered central SOE.

Central SOEs are large groups within the jurisdiction of the central authorities, while SOEs refer to all enterprises owned by all levels of government.

Through mergers, acquisitions and restructuring, State-owned capital should gravitate more toward emerging industries and advanced manufacturing, as well as other sectors that have a bearing on people's well-being and national security. It would make notable breakthroughs if mixed-ownership reform can be carried out at the group level of central SOEs, said Liu Xingguo, a researcher at the China Enterprise Confederation.

He said the capital market will play a major role in SOE reform as a platform for financing, stock issuance, as well as mergers and acquisitions over the next several years.

Peng Huagang, secretary-general of the State-owned Assets Supervision and Administration Commission of the State Council, said the government will continue to encourage central SOEs and their subsidiaries with strong technological innovation capabilities and promising market prospects to go public, as well as support capable central SOEs to list on the Hong Kong stock exchange.