As global COVID-19 deaths surpassed 1 million on Monday according to the Center for Systems Science and Engineering at Johns Hopkins University, it has become increasingly urgent for all countries and regions to join forces to fight the COVID-19 pandemic and mitigate its social and economic impact. 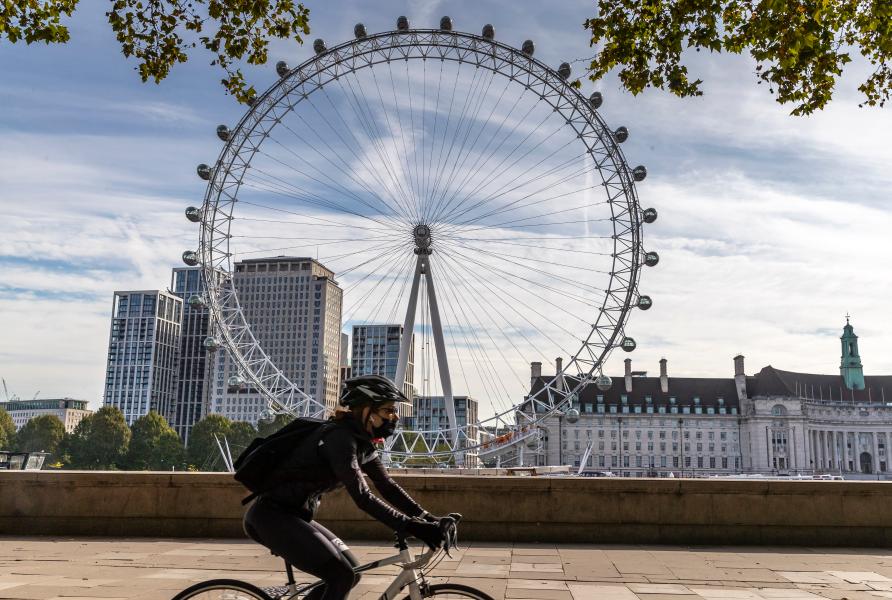 A woman wearing a face mask cycles past the London Eye in London, Britain, on Sept. 28, 2020. (Xinhua/Han Yan)

While experts from around the world have warned of a resurgence of the spread of the novel coronavirus with the approaching fall and winter, countries that haven't overcome the first wave of infections face even greater difficulties ahead.

In the United States, almost half of the states are reporting increasing numbers of new COVID-19 cases. As of Sunday, the number of new COVID-19 cases has increased by at least 10 percent compared with the week before in 21 states, according to a CNN analysis of data from Johns Hopkins University.

"Daily deaths are expected to reach 3,000 per day in late December. The reference scenario suggests that cumulative deaths will reach 371,000 by January 1," said a projection of the Institute for Health Metrics and Evaluation at the University of Washington.

Months into the pandemic, the United States has recorded more than 7.13 million confirmed COVID-19 cases and over 204,900 deaths as of Monday afternoon, according to the real-time count by Johns Hopkins University. 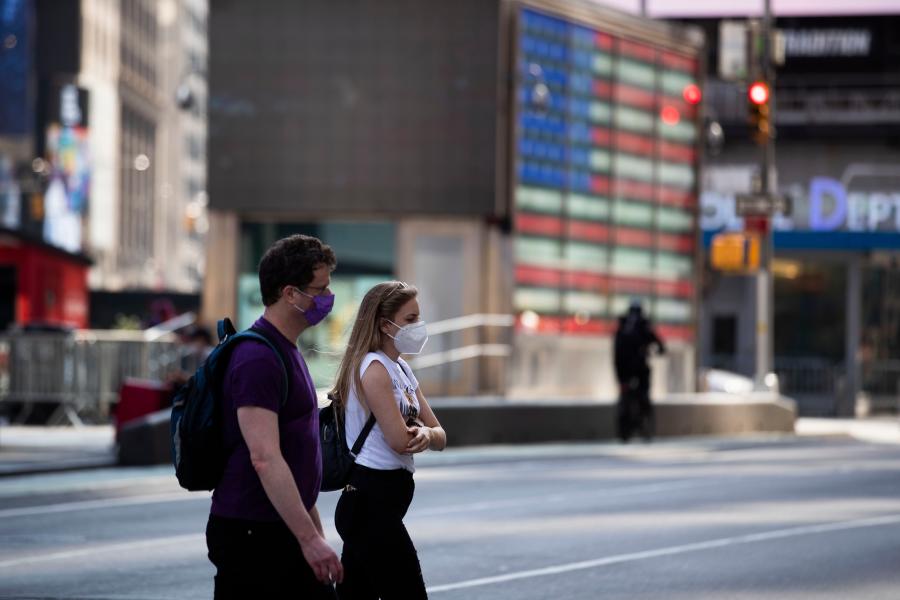 In Italy, fresh statistics on Monday showed the number of active COVID-19 infections exceeded 50,000 again for the first time since late May.

In Spain, Health Minister Salvador Illa on Monday reiterated his warning to the regional government of Madrid that it needs to take further action to stop the spread of coronavirus in and around the Spanish capital.

"There is community transmission" of the virus, which is spreading without control, he said, adding "the numbers continue to rise."

"Madrid is responsible for almost 40 percent of all cases in our country and 20.7 percent of all PCR (polymerase chain reaction) tests are positive, almost twice the rate of the rest of Spain," said Illa.

In Britain, Professor Mark Woolhouse, a member of the Scientific Advisory Group for Emergencies, said a third wave of COVID-19 was "entirely possible" and warned current lockdown restrictions will not solve the problem.

The number of cases in India continues to rise steeply. According to its federal health ministry, the total tally has reached 6,145,291 and the death toll now stands at 96,318 as of Monday.

In such a severe situation, the world needs to stand together to accelerate the development of a vaccine, reestablish social order and revitalize the global economy.

As China has managed to keep the pandemic under control, it has sent expert teams to countries in need to share its anti-virus experiences, carried out vaccine development programs with a few countries, and tried various ways to contribute more to the world economy.

Gerry Rice, spokesman of the International Monetary Fund, said that considering the better-than-expected economic data from China and other advanced economies, the global economic outlook is less dire than three months ago. A tourist enjoys sunshine on a beach in the resort city of Cancun, Mexico, on Sept. 28, 2020. (Photo by Rodolfo Flores/Xinhua)

The recovery of China's economic dynamism will have positive effects on Latin American economies, given China's "fundamental" importance as a regional trade partner, said Alicia Barcena, executive secretary of the Economic Commission for Latin America and the Caribbean.

Early this month, the German government has predicted that the economy will contract by 5.8 percent this year, a more optimistic outlook than the previously expected fall of 6.3 percent. However, the slow economic rebound from the coronavirus shutdowns may face a lot of uncertainties due to a pandemic resurgence.

Finnish transport company Nurminen Logistics on Monday launched a new rail freight route between Finland's capital Helsinki and Chongqing, a major city in southwest China, a move that can double the volume of rail freight transport between the two countries next year to at least 170 trains annually, said Minister for Development Cooperation and Foreign Trade Ville Skinnari, who added that the rail connection to China is important for the operation of Finland's companies.

At the general debate of the 75th session of the United Nations (UN) General Assembly last week, world leaders have voiced strong support for the key role of the 193-member world body in fighting global challenges such as the raging pandemic and called for closer, joint actions of the international community to get through these tough times together.

Chinese President Xi Jinping, in his video speech at the UN high-level meetings, called on countries to put people and lives first and enhance solidarity to get through the pandemic together, emphasizing the guiding role of the World Health Organization in the global response.

"While no country or society will succeed alone, some are still maintaining a 'me first logic' rather than coming together," said UN Deputy Secretary-General Amina Mohammed. "We must turn this approach around. We need solidarity and concerted multilateral efforts to fight the pandemic and save lives." 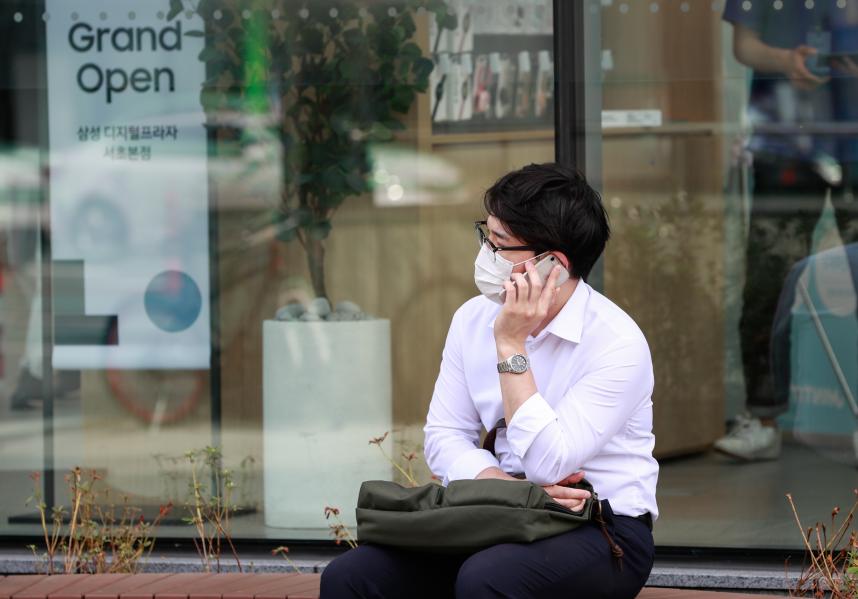 A man wearing a mask talks on the phone outside a digital plaza in downtown Seoul, South Korea, Sept. 29, 2020. (Xinhua/Wang Jingqiang)

The international community, with the coordination from the World Health Organization, has witnessed progress in its collective search for vaccines. A consensus that these vaccines should be delivered equitably, instead of being used as a commodity for profit, has also taken shape globally.

China is working with several countries on phase-three clinical trials of COVID-19 vaccines. When available, as Beijing has pledged, vaccines will be shared with other countries as a global public good.

As the pandemic continues to rage and the global economic crisis remains far from over, the world is crying for more solidarity and cooperation from every corner of the globe. In this regard, countries have no choice but to stand together and closer.