The long holiday is a season of tourism and consumption boom that is set to inject momentum into China's recovering economy.

Amid regular epidemic control, hundreds of millions of Chinese will be traveling for family reunions or leisure staycations after some trying months due to the COVID-19 epidemic.

Xu Jie, a 35-year-old photographer with the Shanghai-based Spring Tour travel agency, celebrated the National Day with 15 local tourists. They took a city walk, strolling along the Bund, an iconic scenic spot of the metropolis. He guided the visitors to catch sight of the magnificent sunrise on the Huangpu River.

"More and more people are developing a fondness for city walks, which can help them better understand the place. Especially since the outbreak of the COVID-19 epidemic, most people choose not to travel abroad to avoid risks of infection," said Xu.

Spring Tour has launched such city-stroll services in Shanghai to help people develop a deeper understanding of the city's history and culture.

To speed up the recovery of domestic tourism amid regular COVID-19 control, China further eased restrictions by raising the limit on daily reception numbers at scenic spots, theaters and performance venues to 75 percent of their maximum capacity, the Ministry of Culture and Tourism said in mid-September.

During the holiday, the total number of domestic tourists nationwide is expected to reach 550 million. Booming travel demand has driven the speedy recovery of the country's tourism and consumption sectors. 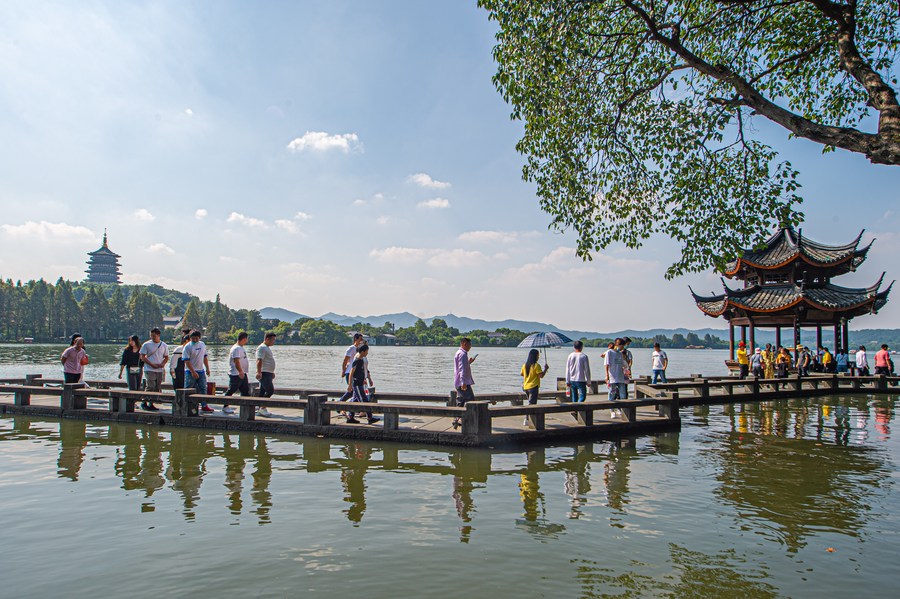 "Thanks to the new measures to boost business resumption, China will embrace a stronger recovery of tourism and consumption," said He Jianmin, a professor at Shanghai University of Finance and Economics.

On Thursday, a scenic moat area along the city wall in northwest China's Xi'an, capital of Shaanxi Province, opened to the public for free after renovations.

Luo Qiang, a tourist from southwest China's Chongqing Municipality, arrived in Xi'an with his family members on Thursday morning after a 10-hour self-driving trip. They braved the drizzle to visit the city wall as the first stop of their planned six-day tour of the city.

During the first hour and a half after opening, the number of tourists exceeded 1,000, said Cao Ling, spokeswoman for the Xi'an city wall scenic area. Strict disinfection measures were taken in all public areas each day, and the reception volume was kept below 75 percent of the maximum capacity, she said.

According to the Shanghai Municipal Administration of Culture and Tourism, on the first day of the holiday, more than 150 major tourist attractions in the city received 950,000 tourists, up 110 percent year on year. Shanghai's 90 museums held 46 temporary exhibitions and received 80,400 visitors, up 98.8 percent year on year.

The holiday features traditional customs as the Mid-Autumn Festival coincides with the National Day holiday. The traditional festival is marked by family reunions, with people eating mooncakes and enjoying lanterns and views of the full moon. 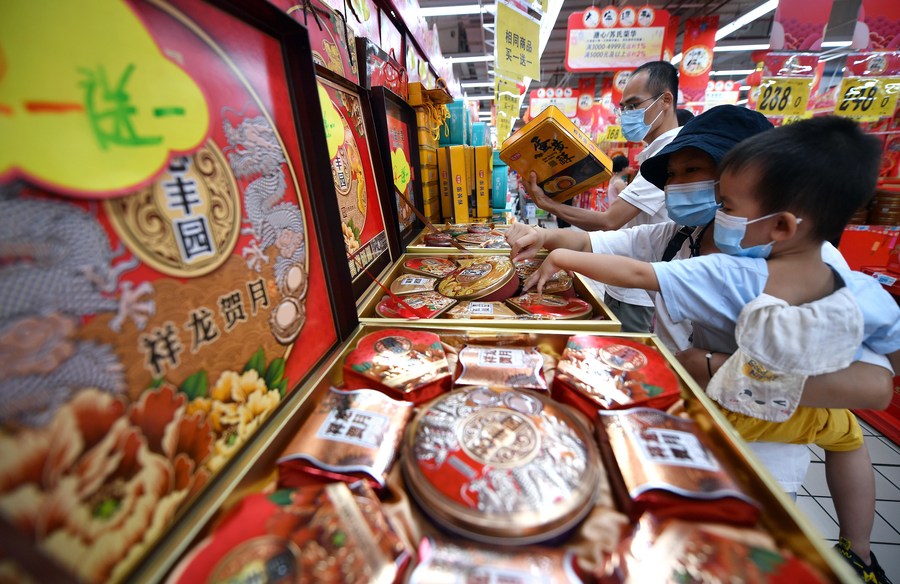 Customers buy mooncakes ahead of the Mid-Autumn Festival at a supermarket in Haikou, south China's Hainan Province, Sept. 26, 2020. (Xinhua/Guo Cheng)

Famous bakeries and restaurants in Shanghai have developed new flavors for mooncakes, such as cheese mooncakes, and milk-and-tea mooncakes, to attract customers.

"The sales volume of our mooncakes so far this year has surpassed that of the same period last year," said Jiang Yong, assistant to the general manager of Godly, a Shanghai-based food company with nearly 100 years in the business.

Shanghai has planned more than 140 cultural and tourism activities for the holiday, including a lantern festival, according to local officials.