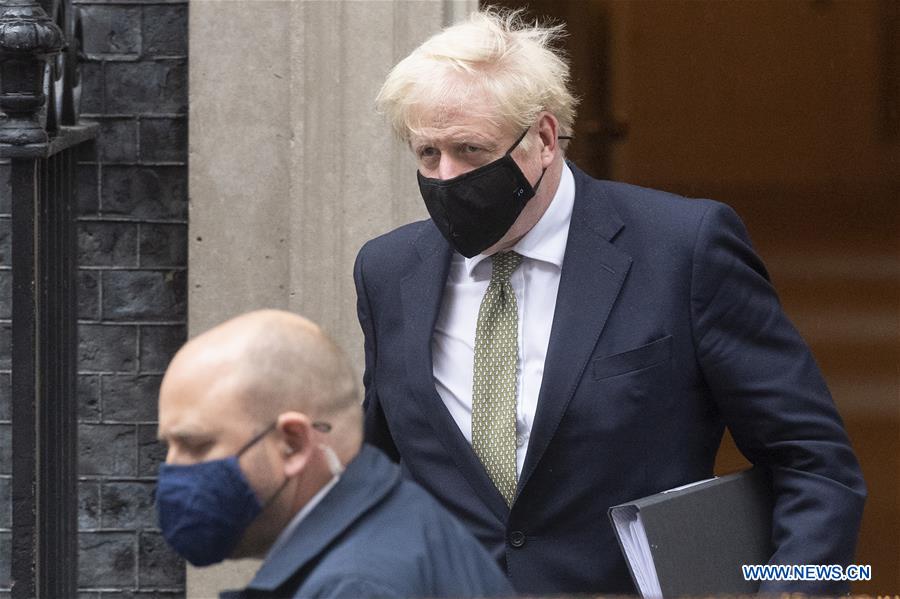 British Prime Minister Boris Johnson (R) leaves 10 Downing Street in London, Britain, on Oct. 12, 2020. British Prime Minister Boris Johnson on Monday announced a new three-level COVID-19 alert system that will be implemented across England, with Liverpool moved to the highest tier as the level being decided according to local infection rates. (Photo by Ray Tang/Xinhua)

British Prime Minister Boris Johnson on Monday announced a new three-level COVID-19 alert system that will be implemented across England, with Liverpool moved to the highest tier as the level being decided according to local infection rates.

Outlining the new strategy, Johnson said it simplify and standardise local rule by introducing a three-tier system of local COVID-alert levels in England, set at "medium", "high" and "very high".

He said the "medium" alert level, which will cover most part of the country, will consist of the current national measures, including the Rule of Six for people meeting, and the closure of hospitality (bars and restaurants) at 10 p.m. BST (2100 GMT).

The "high" alert level would reflect interventions in many local areas at the moment, primarily aimed at reducing household to household transmission, by preventing all mixing between different households or "support bubbles" indoors.

The "very high" level will apply where transmission rates are rising most rapidly and where the National Health Service (NHS) could soon be under unbearable pressure without further restrictions.

In those areas the government will set a baseline of prohibiting social mixing indoors and in private gardens as well as closing pubs and bars. But retail shops, schools and universities will remain open.

The Liverpool City Region will be placed in the "very high" level from Wednesday, and following talks with local leaders, that gyms, leisure centers, betting shops and casinos will also close, said Johnson.

Local officials will be allowed to impose their own added measures and restrictions, and call for help from the military if needed.

There was immediate reaction in Liverpool where the CEO of the city's Chamber of Commerce, Paul Cherpeau, said businesses across Liverpool were bewildered, frustrated and angry by the new restrictions.

In Liverpool's Beatles quarter musicians gathered for a silent protest as the new coronavirus lockdown restrictions on the city were announced.

Meanwhile, Angela Eagle, Labour MP for Wallasey which is one of the areas to be hit by the Liverpool lockdown, said financial support for those impacted by COVID-19 has been woefully inadequate.

Keir Starmer, leader of the main opposition Labour Party, said he was sceptical the measures announced by Johnson would work. He said Britain was at a critical moment with the virus spreading in all areas of Britain.

"The question today is whether the restrictions announced by the prime minister can bring the country back from the brink," he told MPs.

The new measures were being laid before the British parliament Monday with lawmakers voting Tuesday whether to give them the go-ahead. With Johnson's 80-seat majority, the vote would seem to be a formality.

"This is not how we want to live our lives," Johnson said. "But it's the narrow path we have to tread between social and economic costs of a full lockdown and the massive human and indeed economic cost of an uncontained epidemic."

He said he must warn the House of Commons the weeks and months ahead will continue to be difficult and will test the mettle of the country. "I have no doubt at all that together we will succeed," he added.

The British universities minister, Michelle Donelan, said Monday that based on the data supplied by universities, so far about 9,000 students in England currently have been infected, with 68 universities dealing with outbreaks.

The announcement of the new alert system came hours after the country's top medical officials warned how hospitals beds were fast filling up with COVID-19 cases, with the death rate expected to escalate as more older and vulnerable people are infected.

Johnson said there are now more patients in hospitals with the virus than there were when the first wave of lockdown measures were brought in on March 23, and deaths were also increasing. He said the number of cases has quadrupled in the last three weeks.