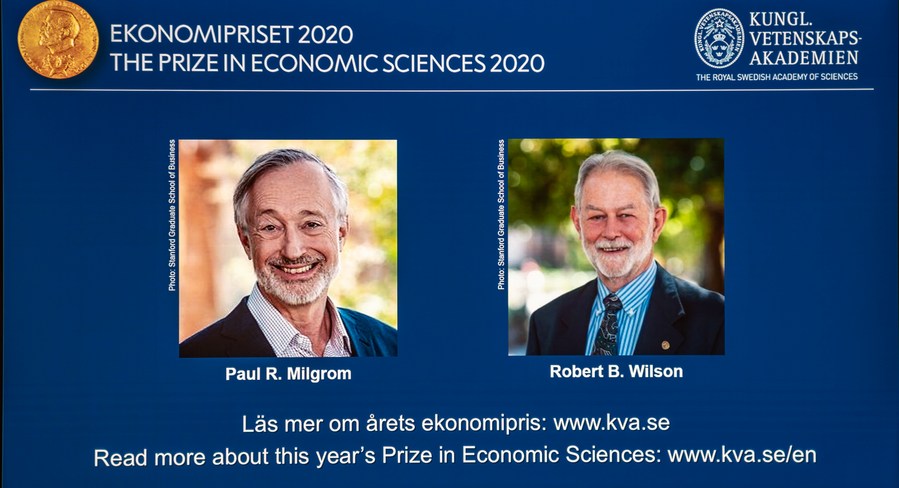 The photos of Laureates of the 2020 Nobel Prize in Economics are seen on a screen during the prize announcement in Stockholm, Sweden, Oct. 12, 2020. (Photo by Wei Xuechao/Xinhua)

The 2020 Nobel Prize in Economics was awarded to Paul R. Milgrom and Robert B. Wilson "for improvements to auction theory and inventions of new auction formats," the Royal Swedish Academy of Sciences announced here on Monday.

Milgrom and Wilson, both of them professors at Stanford University, "have studied how auctions work, and used their insights to design new auction formats for goods and services that are difficult to sell in a traditional way, such as radio frequencies," the academy said in a statement.

Their discoveries have benefited sellers, buyers and taxpayers around the world, it said.

Wilson developed the theory for auctions of objects with a common value -- a value which is uncertain beforehand but, in the end, is the same for everyone. Examples include the future value of radio frequencies or the volume of minerals in a particular area, the statement explained. 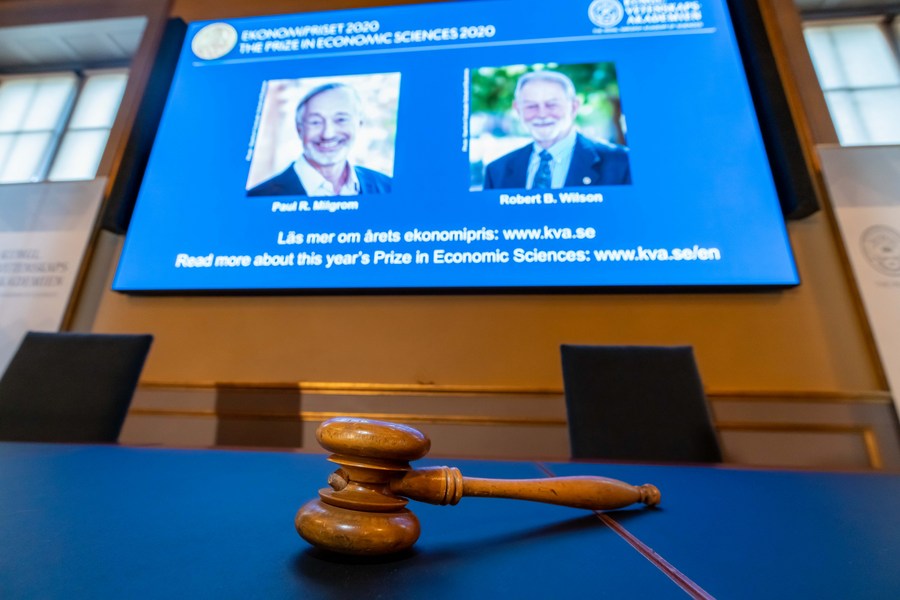 The photos of Laureates of the 2020 Nobel Prize in Economics are seen on a screen during the prize announcement in Stockholm, Sweden, Oct. 12, 2020. (Photo by Wei Xuechao/Xinhua)

Milgrom formulated a more general theory of auctions that allows not only common values, but also private values that vary from bidder to bidder, said the statement, adding that he analyzed the bidding strategies in a number of well-known auction formats, demonstrating that a format will give the seller higher expected revenue when bidders learn more about each other's estimated values during bidding.

The two economists invented new formats for auctioning off many interrelated objects simultaneously, and in 1994, the U.S. authorities first used one of the formats to sell radio frequencies to telecom operators. Since then, many other countries have followed suit, according to the statement.

"This year's Laureates in Economic Sciences started out with fundamental theory and later used their results in practical applications, which have spread globally. Their discoveries are of great benefit to society," Peter Fredriksson, chair of the Prize Committee was quoted in the statement as saying.

Wilson said in an onsite telephone interview that it's "very happy news," and that he's "glad about it!"

Milgrom, born in 1948, is Shirley and Leonard Ely Jr. Professor of Humanities and Sciences, Stanford University.

The prize, totaling 10 million Swedish kronor (about 1.14 million U.S. dollars), will be shared equally between the two laureates.