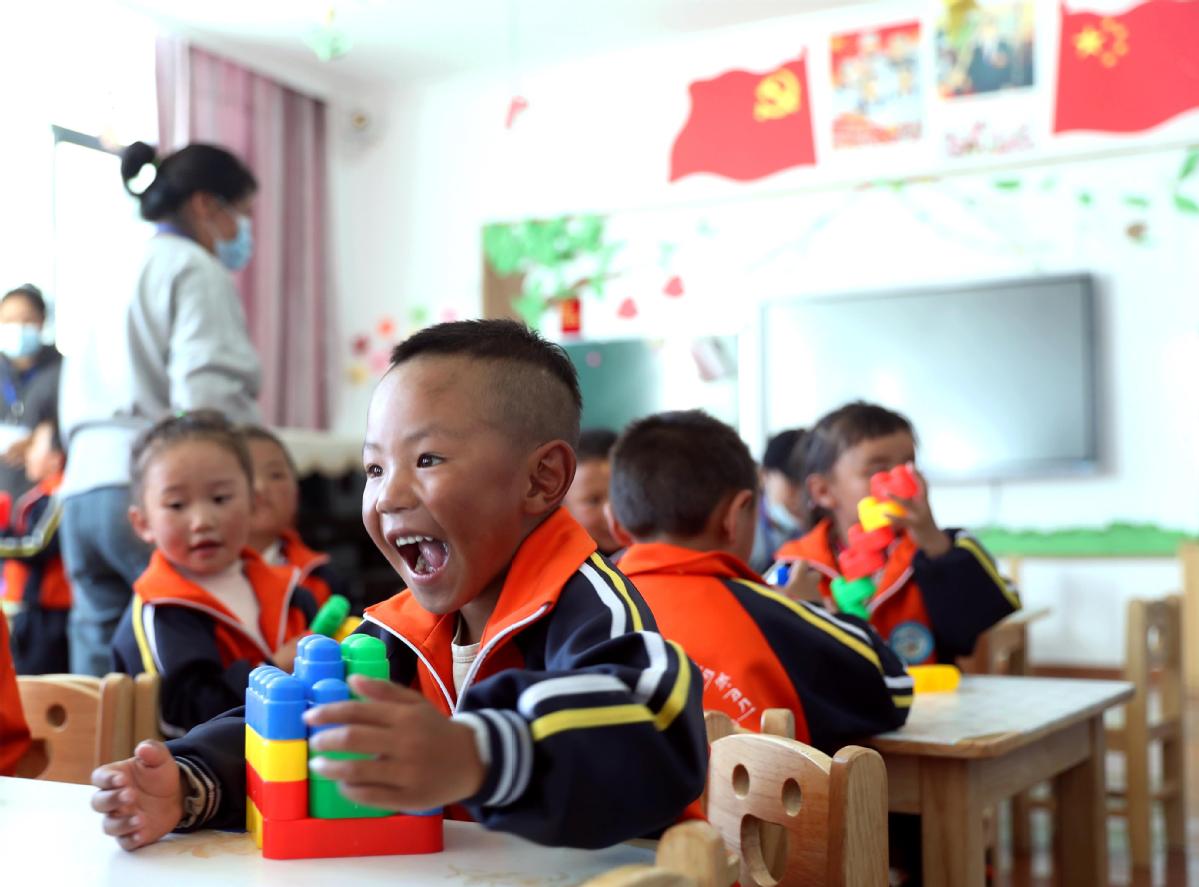 Children attend a class at a kindergarten in Lhokha, Tibet autonomous region, on Wednesday. The children's families were relocated from high-altitude residences to low-altitude ones, as part of the region's poverty relief efforts. ZOU HONG/CHINA DAILY

There is no so-called forced transfer of labor in the Tibet autonomous region, Qizhala, chairman of the regional government, said on Thursday, pointing out that farmers and herdsmen were eager to leave their hometowns to take up vocational training in order to enhance their skills and boost their incomes.

Speaking at a news conference in Lhasa, the region's capital, on Tibet's poverty alleviation work, Qizhala gave the example of Shuanghu county, where herding cattle and sheep used to be the only source of employment.

He said that when this was the only option, half of the county's workforce was relatively idle, but now "going out of the mountains and taking a look at the outside world is a choice for them".

Despite the impact of the COVID-19 pandemic, the per capita income in rural areas of Tibet increased by 10.2 percent year-on-year in the first six months of 2020, and the increased incomes of transferred workers contributed significantly to this growth.

He said people from rural areas tended to prefer training in skills that offer the prospect of well-paid employment and are in great demand, such as driving, construction and electric welding.

As a solid step to implement poverty alleviation in Tibet, about 176,300 people from poor families have received training and 340,500 people have been helped to find work outside their hometowns.

Tibet plans to transfer 630,000 workers this year, the chairman said.

Wu Yingjie, the region's Party secretary, said at the news briefing that Tibet has achieved a "major victory "in alleviating poverty, with 628,000 people being lifted out of poverty by the end of 2019.

Since the beginning of this year, Tibet has shifted its focus from tackling absolute poverty to consolidating poverty alleviation achievements, said Wu.

In another development, China reiterated on Thursday that Tibet affairs are China's internal affairs that allow no foreign interference after the United States appointed a senior human rights official as its special coordinator for Tibetan issues.

"The US appointment of a so-called special coordinator for Tibetan issues is a political manipulation to interfere in China's domestic affairs and undermine Tibet's development and stability. China firmly opposes it and has never acknowledged it," Foreign Ministry spokesman Zhao Lijian said at a regular media briefing.

Zhou Jin contributed to this story.