Global COVID-19 infections topped 40 million on Monday, with over 1.1 million deaths registered worldwide, according to the Center for Systems Science and Engineering at Johns Hopkins University.

The new grim milestone came faster than expected and is sounding a warning alarm to the world that a second wave of COVID-19 has arrived.

In face of this grave situation, world leaders and experts have called for a strict adherence to health instructions and closer international cooperation on vaccine development.

The momentum of infections worldwide has been accelerating over the past couple of months. While it took 44 days for the global tally to increase from 10 million to 20 million and 38 days from 20 million to 30 million, it took 31 days this time for the number to reach 40 million from 30 million.

A second wave of COVID-19 across the European continent is a cause for concern.

According to the World Health Organization (WHO) COVID-19 dashboard, Europe has registered 927,433 infections in the past week, the highest among the six regions on the dashboard.

Confirmed cases in the Greater Manchester area in Britain tripled over a two-week period, and the entire intensive care unit capacity in the region will be filled with coronavirus patients in less than a month "if nothing changes," a Downing Street spokesman said Monday. 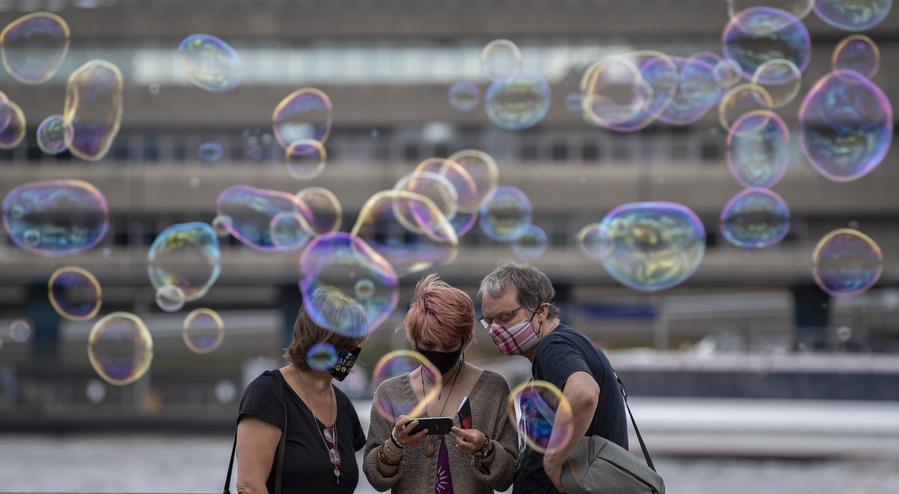 In Belgium, the daily average number of new cases was nearly 7,900 from Oct. 9 to Oct. 15, up by 79 percent compared with the previous week, said the Sciensano public health institute.

Meanwhile, the situation is failing to ebb in the Americas and Middle East.

The United States has reported more than 8.2 million cases and over 220,000 deaths, both the highest in the world. 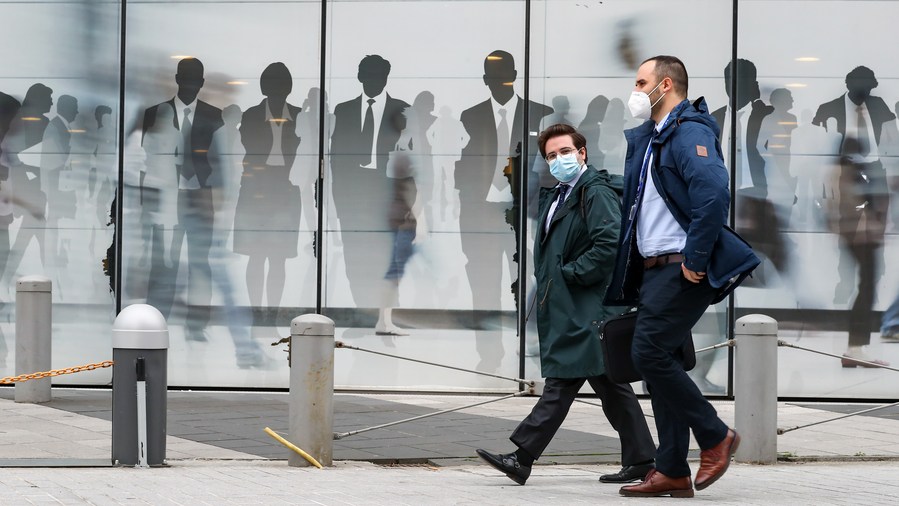 An updated model forecast by the Institute for Health Metrics and Evaluation at the University of Washington found nearly 390,000 deaths could be caused by COVID-19 in the country by Feb. 1, 2021, based on a current projection scenario.

Brazil's death toll surpassed 154,000 on Monday, with 271 more deaths from COVID-19 registered in the last 24 hours, whereas Argentina reported 12,982 new cases in the past day, raising the national count to over 1 million.

Furthermore, Iran on Monday saw the highest single-day death toll since the virus outbreak in the country, while Iraq's total confirmed cases have exceeded 430,000.

Health experts say the reasons behind the surging caseload are both colder weather and wanton violation of precautionary measures.

Cooler months would drive people indoors and help the virus spread, said U.S. health experts, as Director of the U.S. Centers for Disease Control and Prevention Robert Redfield noted last week that small gatherings are increasingly becoming a source of COVID-19 infections in the United States.

A government-appointed panel studying the mathematical progression of COVID-19 numbers in India warned that the onset of winter and upcoming festivals may increase people's susceptibility to COVID-19 infections, according to local media reports. 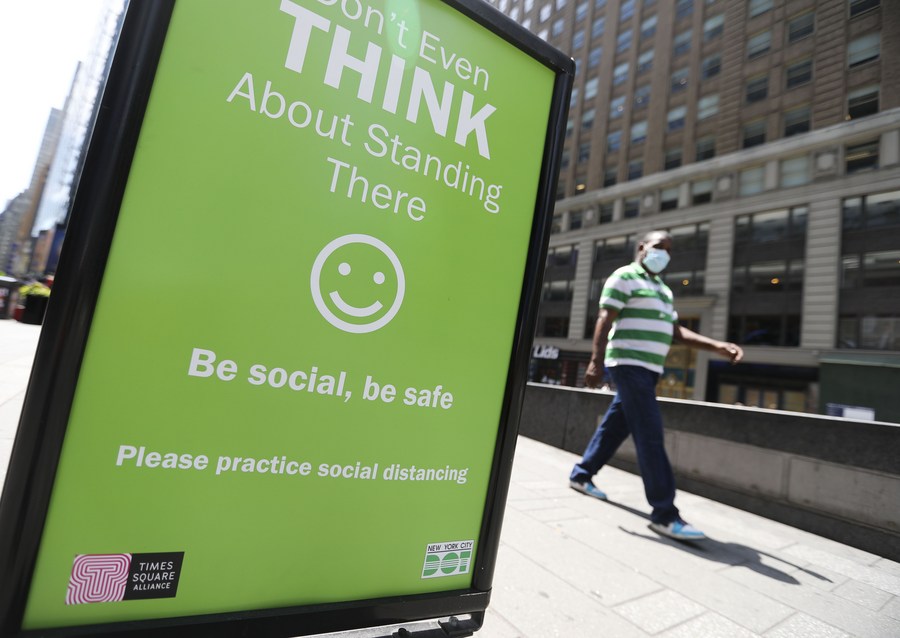 A man walks past a social distancing notice on Times Square in New York, the United States, July 23, 2020. (Xinhua/Wang Ying)

WHO Director-General Tedros Adhanom Ghebreyesus also warned on Monday of tougher months ahead with the coming winter in the northern hemisphere, particularly in Europe and North America.

However, most experts have agreed that compared to temperature changes, ignoring public health protocols are more to blame.

For example, North Macedonia's Interior Ministry said Sunday that police had fined 702 citizens in the last 24 hours for not complying with the mandatory measure of using personal protective equipment such as face masks.

"There is a risk that the pandemic gets normalized as time passes and that could lead to a failure to comply with the Public Health Agency's recommendations," said a joint report from Sweden's county administrative boards.

Adrian Esterman, biostatistician and epidemiologist at the University of South Australia, told Xinhua that the Australian State of Victoria has seen individual actors placing COVID-19 restrictions in jeopardy by "breaking the requirements and causing clusters."

Iraq has also attributed the increase of COVID-19 infections in the country partly to the lack of public compliance to health instructions.

In a statement carried by the Saudi Press Agency on Monday, Saudi Arabian Health Minister Tawfiq Al-Rabiah said several countries are witnessing a strong second wave of infections when precautionary steps are not followed.

"Experts are saying that wanton violation of containment protocols is wholly to blame for the spike," said Mutahi Kagwe, cabinet secretary of the Kenyan Health Ministry.

WHAT TO DO NEXT

A global economic recovery is likely to be "long, uneven and highly uncertain" as long as the COVID-19 pandemic is not under control, warned Gita Gopinath, chief economist at the International Monetary Fund, in a remote video interview with Xinhua last week.

As the interplay between COVID-19 and economic recovery becomes more evident, it is of vital importance to find the balance between protecting public health and the economy.

Riccardo Puglisi, an economist in the Department of Political Science at the University of Pavia in Italy, said governments should learn to confront health risks without putting too much of a drag on the economy.

"It's important that all governments focus on the fundamentals that help to break the chains of transmission and save both lives and livelihoods," said John Vaz, senior lecturer at the Monash University Business School in Melbourne.

As some countries with surging caseloads have chosen milder and targeted -- usually localized, rather than nationwide -- approaches to deal with the new wave of coronavirus, many experts suggested stricter restrictions might still be needed in the near future.

During a virtual press conference on Monday, Executive Director of the WHO Health Emergencies Programme Michael Ryan said he had a "golden wish" that every contact of a confirmed case should be properly quarantined to break the chains of transmission.

Countries like China, South Korea and Japan have been able to implement measures longer than their counterparts in places like Europe and North America, Ryan said, adding Asian countries had "serious follow-through" in the anti-pandemic fight and their peoples had great trust in and compliance with governments.

Esterman believed governments should present a clear and transparent anti-pandemic plan to dismiss public impatience and at the same time communicate effectively with the public about the reason for following health regulations. 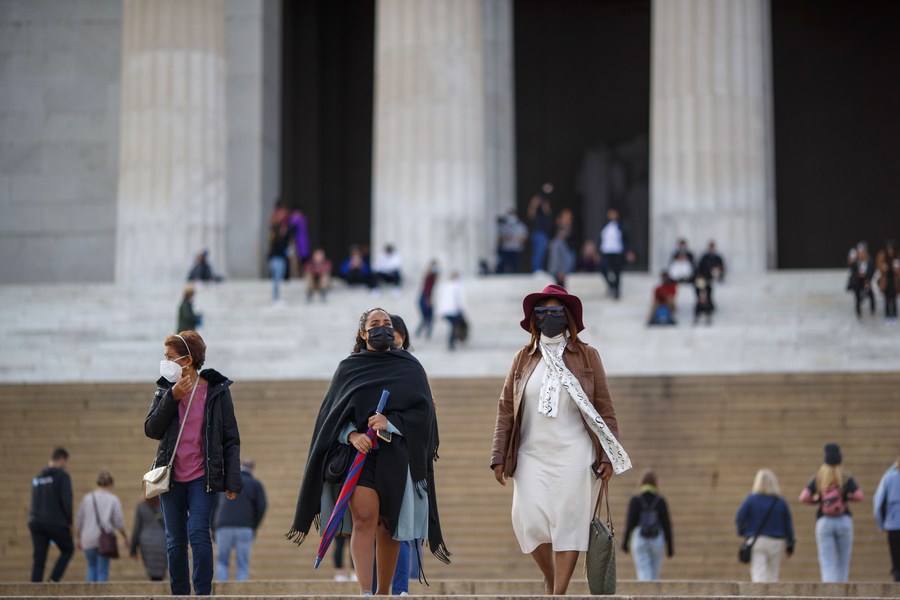 Meanwhile, world leaders and experts have urged the international community to strengthen cooperation on vaccine development.

"Global efforts on vaccines are very intense at the moment," Franco Locatelli, president of Italy's Higher Health Council and member of the technical-scientific committee counseling the cabinet in the COVID-19 emergency, said Monday.

Noting on Monday that 184 countries and economies have now joined COVAX, a global initiative backed by the WHO to ensure effective and equitable global access to COVID-19 vaccines, Tedros said "equitably sharing vaccines is the fastest way to safeguard high-risk communities, stabilize health systems and drive a truly global economic recovery."

"Vaccinating the world against COVID-19 will be one of the largest mass undertakings in human history, and we will need to move as quickly as the vaccines can be produced," said UNICEF Executive Director Henrietta Fore in a press release on Monday.