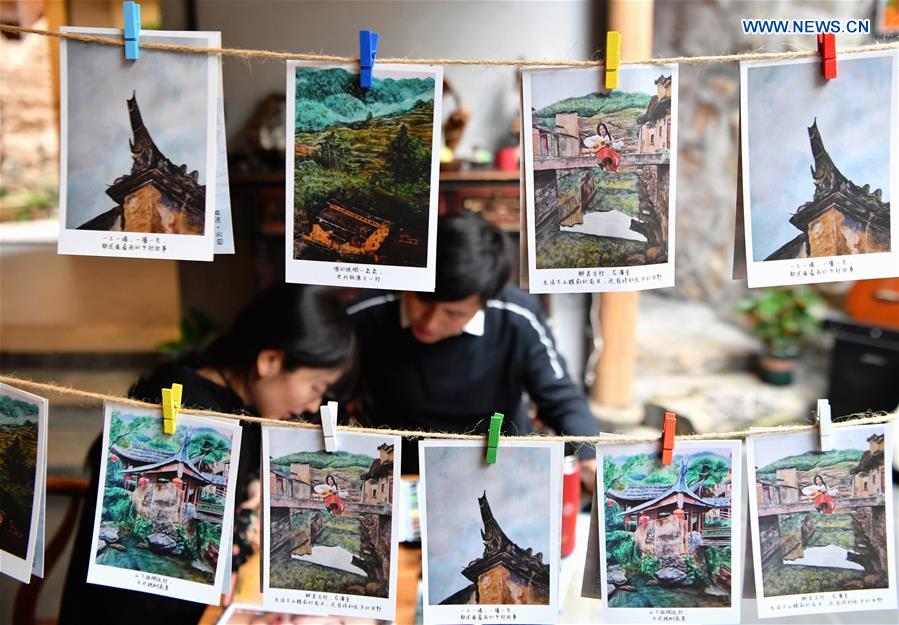 Photo taken on Oct. 21, 2020 shows the postcards made by Hu Wenliang, a professional designer introduced to Longtan Village who started a cultural and creative space here, together with his family, in Longtan Village of Pingnan County in Ningde City, southeast China's Fujian Province. Longtan Village had been a provincial-level poverty-stricken village due to lack of arable land. Villagers went out for work one after another with many old buildings left in disrepair. In 2017, the county government launched a project to boost ancient villages through cultural and creative industries. The old houses, once forgotten, have been connected to public utilities, reinforced and decorated inside, with the ancient appearance of the village remained. Moreover, the renaissance here has attracted many people and college graduates outside the village to work here. Nowadays, more and more people come to visit Longtan since the village has become popular on the Internet. (Xinhua/Wei Peiquan)

BACK TO TOP
Edition:
Chinese | BIG5 | Deutsch
Link:
About CE.cn | About the Economic Daily | Contact us
Copyright 2003-2020 China Economic Net. All right reserved
Village in Fujian shakes off poverty through cultural and creative industries
Source:Xinhua | 2020-10-22 07:27
Share to
0