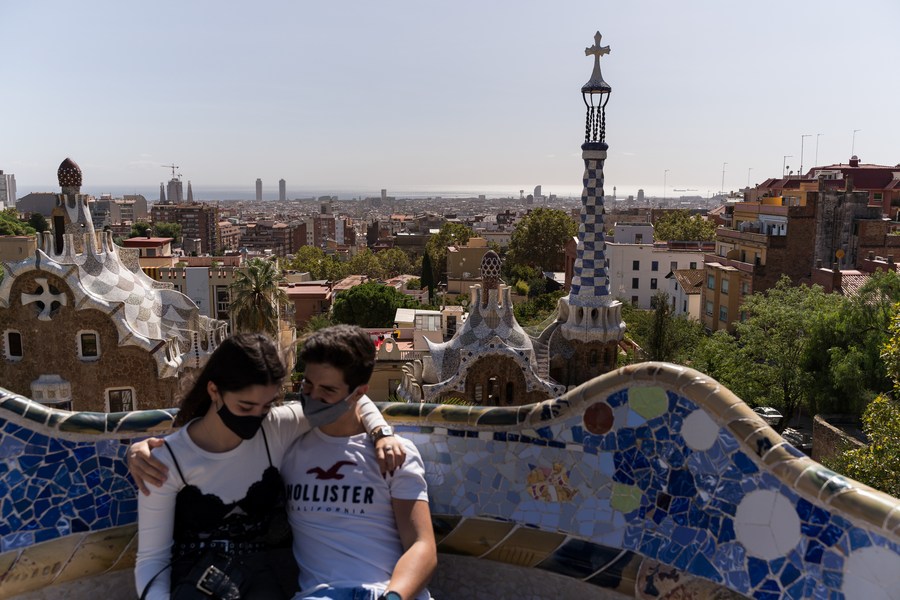 A couple wearing face masks rest on a bench in Park Guell in Barcelona, Spain, Sept. 25, 2020. (Photo by Joan Gosa/Xinhua)

Spanish Prime Minister Pedro Sanchez on Sunday announced a State of Alarm in an attempt to halt the spread of coronavirus, days after Spain became the first European Union state to pass the grim one-million-case mark.

The State of Alarm, effective from Sunday, has an original duration of 15 days. But the prime minister said his government aims to keep it in effect until May 9, 2021 -- a move needs the support of a majority in Spain's 350-seat Congress.

The State of Alarm was approved in an emergency cabinet meeting Sunday morning after 11 out of Spain's 17 Autonomous Communities had requested it. It will limit movements from 11 p.m. until 6 a.m. for all regions of Spain except the Canary Islands.

"This is a restriction of night-time movement and has nothing to do with a curfew. According to experts, restrictions on mobility and a reduction in social relations are vital to contain the virus," said Sanchez in his televised speech, adding that social meetings will be limited to six in the entire country.

"All of Europe is taking measures to limit mobility," said Sanchez, adding that the Autonomous Communities will also have discretion to stop people entering or leaving their territory -- for example, if a neighboring region is badly affected by the coronavirus.

The Health Ministry has reported over 1 million cases since the start of the pandemic. Sanchez commented that the coronavirus incidence in Spain has risen to 362 cases per 100,000 inhabitants and that one aim of re-imposing the State of Alarm is to bring this level down to just 25 cases.

The new State of Alarm will not, however, impose a strict lockdown as the one introduced on March 14, and Spain's borders will also remain open.

A State of Alarm is the first of three emergency levels a Spanish government can apply under exceptional circumstances, with the others being "A State of Exception" and "Martial Law."

A State of Alarm grants the government special powers to limit the movement of citizens.