The lenders signed the agreement to provide a total loan of 100 million U.S. dollars for the Zhanatas wind farm, located approximately nine kilometers southwest of Zhanatas in the southern Zhambyl region of Kazakhstan.

The wind power project, when completed, will provide the country approximately 319-gigawatt hours of renewable energy and reduce carbon dioxide emissions by 289,000 tonnes annually. It’s expected to meet the electricity demand of millions of households and directly improve the current situation of power shortage in southern Kazakhstan.

Tian Jun, the Chairman of China Power International Development Ltd. addressed at the ceremony that the timely operation and financing of Zhanatas wind power project is a result of the joint efforts from all parties. It provides valuable experiences and enlightenment for Chinese enterprises to develop renewable energy in Kazakhstan and other countries in Central Asia.

With construction officially kicked off in July 2019, partial operation of the wind power project was reached on September 30th this year, marking that the Zhanatas wind power plant has formally started to produce green energy, said Tian. 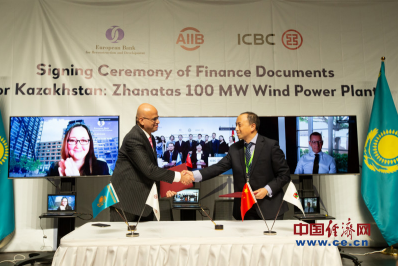 AIIB is financing up to 34.3 million U.S. dollars for the operation and construction of the Zhanatas wind power project. "Our investment in the largest wind power plant in the region reflects AIIB's support for the government of Kazakhstan's transition to a 'green economy', which will advance efforts to meet the country's commitments under the Paris Agreement," said AIIB Vice President and Chief Investment Officer D.J. Pandian.

The Kazakhstan ambassador to China Gabit Koishybayev expressed his heartfelt thanks to the related parties for their contribution to the development of renewable energies in Kazakhstan.

Against the backdrop of the COVID-19 pandemic when many projects were shut down or postponed for production, Zhanatas Project has been endeavoring to overcome difficulties and ensure smooth operation of the project with high standard and efficiency.

Meanwhile, Zhanatas Project has actively fulfilled its social responsibilities, repairing houses for the local residents and donated an ambulance for the community. With the recognition of the local government and people, Zhanatas Project won the Best Social Contribution Enterprise Award in 2020 in Zhambyl region of Kazakhstan.

According to the official release, CPID has managed an installed capacity of 4.85 million kilowatts of overseas power generation, and its scale of overseas assets has exceeded RMB 62 billion. Conforming with the global trend of de-carbonization, CPID plans to deploy investments in clean energy in the near future to achieve the goal of green and low-carbon development.