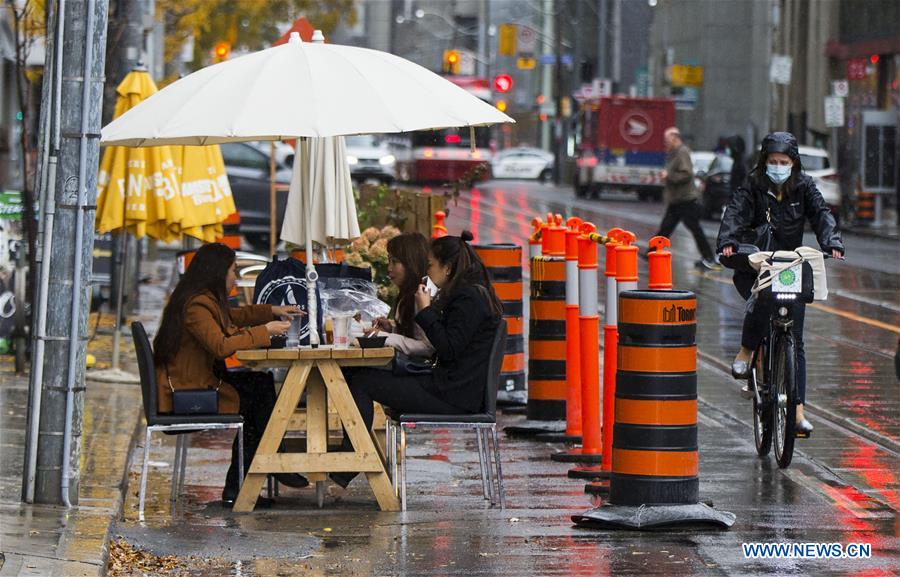 Customers dine at the outdoor area of a restaurant during a rainy day in Toronto, Canada, on Oct. 27, 2020. Canada hit another grim milestone on Tuesday as the country's death toll of COVID-19 reached 10,001, according to CTV. (Photo by Zou Zheng/Xinhua)

Canada hit another grim milestone on Tuesday as the country's death toll of COVID-19 reached 10,001, according to CTV.

The milestone, which has only been reached by 20 other nations according to a tally kept by Johns Hopkins University, comes amid a second wave of the virus that has shattered new case records across parts of the country.

Canada reported a total of 222,670 confirmed COVID-19 cases as of Tuesday evening, about 4.5 percent of the infected people have died of the disease.

Quebec province has recorded 6,172 deaths from COVID-19 while Ontario province has logged 3,103. The two provinces accounted for more than 90 percent of all COVID-19 deaths in the country.

Canada crossed the threshold of 5,000 COVID-19 deaths on May 12. The death toll has climbed much more slowly since then.

However, the second wave of COVID-19 has grown deadlier over the past month. There were 165 COVID-19 fatalities reported in September compared to more than 600 in October so far, according to the Public Health Agency of Canada.

"It's frustrating knowing that unless we're really, really careful, there may not be the kinds of family gatherings we want to have at Christmas," Prime Minister Justin Trudeau said at a press conference on Tuesday. "Nobody wanted 2020 to be this way, but we do get to control how bad it gets by all of us doing our part."

"We will get through this. Vaccines are on the horizon. Spring and summer will come and they will be better than this winter," Trudeau added. Enditem