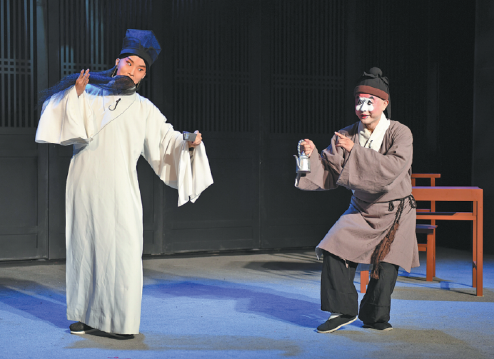 Modernity need not be the enemy of tradition. In some ways it may even enhance it. Traditional works of literature, for instance, can be better presented by modern printing techniques. Likewise with stage plays. While some often lament that ancient Chinese art forms are under threat in the face of contemporary entertainment, there is an unmistakable surge in the popularity of ancient art among younger audiences attracted to the intimacy of small theaters.

Star Theater, a small theater in the capital with three performance spaces－each with a capacity of about 200 seats－is dedicated to presenting Chinese traditional operas. It hosts an annual Xiqu Opera Black Box Festival from Oct 21 to Dec 20. Xiqu means local opera. This year the festival focuses on Peking Opera.

Peking Opera, or jingju, has a history of more than 200 years and was recognized as an Intangible Cultural Heritage of Humanity by UNESCO in 2010. It brings together art forms such as singing, dancing, martial arts and acrobatics.

The performances are characterized by elaborate movements, extravagant makeup and high-pitched singing. This year marks the 230th anniversary of the birth of Peking Opera, which originated from four famous Anhui Opera troupes that came to Beijing to celebrate the 80th birthday of Emperor Qianlong of the Qing Dynasty (1644-1911) in 1790. In around 1840, Peking Opera began to formally take shape, growing rapidly during the reign of Empress Dowager Cixi (1835-1908), an ardent Chinese opera lover. After this, the art form went from strength to strength, with troupes being formed in Beijing, Tianjin and Shanghai.

This year, 16 traditional Chinese opera productions are being staged during the festival, including seven Peking Opera works. There will be productions of other genres, such as Kunqu Opera, Pingju Opera, Cantonese Opera and Chuanju Opera, staged as well. Forums, exhibitions and programs for children will also be offered during the festival. Among them, the Independent Interaction on Contemporary Art Exhibition, which brings together 60 works from nine Chinese artists focusing on Peking Opera, will be held at the Star Theater from Nov 14 to Dec 31.

According to Zhou Long, artistic director of the festival, the event, since its birth in 2014, has attracted more than 100,000 attendees and showcased over 20 kinds of traditional Chinese opera.

"Looking back upon Peking Opera's history, you can tell that it's something that keeps on moving forward and being renovated by pioneers," Zhou says. "It keeps changing thanks to the older generation of Peking Opera masters. Contemporary audiences, especially younger people who are new to Peking Opera, may be attracted to shows in small theaters, which are easy to understand, modern and full of fresh ideas."