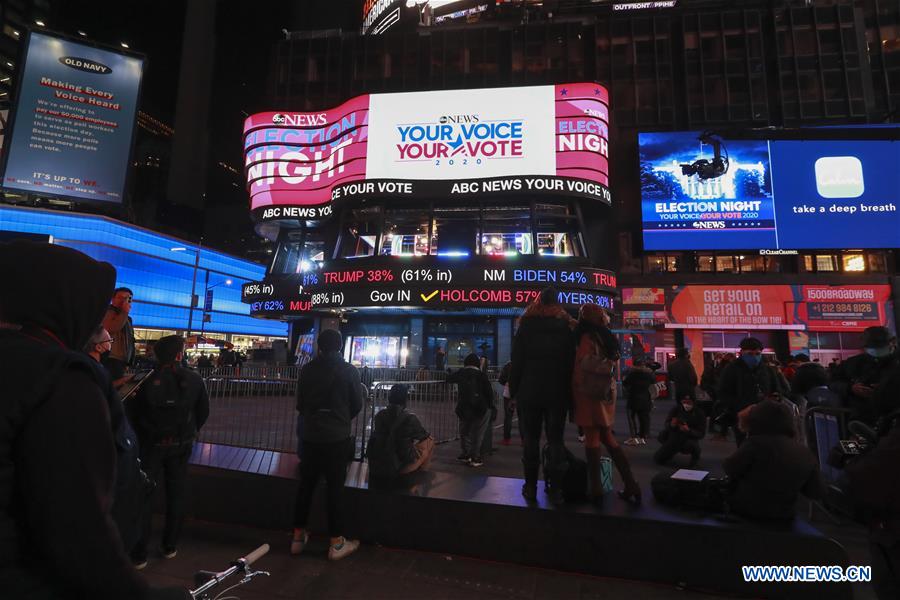 People watch live broadcast of the ballot counting at Times Square in New York, the United States, Nov. 3, 2020. Uncounted ballots in several "battleground states" by Wednesday morning have left open the question of who will be America's next president. (Xinhua/Wang Ying)

Uncounted ballots in several "battleground states" by Wednesday noon have left open the question of who will be America's next president.

As of 12:30 p.m. ET (1730 GMT), sitting President and Republican nominee Donald Trump was projected by U.S. media to take in 213 electoral votes, slightly behind his Democratic challenger, former Vice President Joe Biden, who was projected to win 227 votes. Both fell short of the 270 threshold.

After polls closed across the country, counting remains ongoing. Election results in several states were still too early to call, including Pennsylvania, Michigan, Georgia, North Carolina and Wisconsin, all critical battlegrounds that could be decisive for the Trump-Biden race.

"As many expected, there's no conclusion at this point," Clay Ramsay, a researcher at the Center for International and Security Studies at the University of Maryland, told Xinhua.

Among the latest projections, Biden notched a narrow lead in the pivotal "battleground state" of Michigan, where 92 percent of ballots were tallied.

The state's presidential results could be known by the end of Wednesday, said Michigan Secretary of State Jocelyn Benson, according to CNN. "We'll know much more in the hours to come, and we'll have a much more complete picture of Michigan by the end of today."

The Democratic candidate has an edge over Trump in Wisconsin, where 97 percent of votes were counted, as well as in Nevada, with mail-in votes still being counted, according to U.S. media. Elections officials in Nevada said on Twitter that they would not update their results until Thursday, and had counted all in-person early votes, in-person Election Day votes and mail-in ballots through Monday.

Trump held a noticeable lead in Pennsylvania, where around 20 percent of votes were yet to be counted. "I promised Pennsylvanians that we would count every vote and that's what we're going to do," Pennsylvania Governor Tom Wolf tweeted.

Among other decisive states, Trump managed to fend off attacks from Biden and will hold Florida and Ohio, according to projections. Biden was forecast to flip Arizona, becoming the first Democrat to do so since 1996.

Despite the intense race, the two candidates expressed confidence in their own victories in Election Night speeches.

"We did win this election," Trump said from the East Room at the White House. He said his reelection campaign has produced "phenomenal" results and is "winning everything."

However, Biden told his supporters that "it's not my place or Donald Trump's place to declare who's won this election."

In his hometown of Wilmington, Delaware, Biden said "we believe we're on track to win this election" but it would be "up to the American people" to decide.

"We're going to have to be patient until the hard work tallying the votes is finished," Biden said.

Besides the presidency, all 435 seats in the U.S. House of Representatives and 35 of the 100 seats in the Senate will also be decided in this year's elections. More than a dozen state and territorial governorships, among many other state and local posts, are also up for grabs.

A record number of U.S. voters voted early by mail this year due to the COVID-19 pandemic. But some states require more time to process the mail-in ballots after polls closed.

Christopher Galdieri, a political science professor at Saint Anselm College in the northeastern state of New Hampshire, which kicked off Election Day, told Xinhua that he thinks "it could be days before we have a winner" and it looks like the presidential race "will come down to the PA-WI-MI group again."

Galdieri was referring to Pennsylvania, Wisconsin and Michigan, part of the so-called "blue wall" states that Trump turned red for the first time in decades four years ago, which paved the way for his upset victory over then Democratic nominee Hillary Clinton.

The delay in announcing the results raised concerns of violence between the two camps and legal challenges if contests are close.

"We are up BIG, but they are trying to STEAL the Election. We will never let them do it. Votes cannot be cast after the Polls are closed!" Trump tweeted, before threatening to go to the Supreme Court to stop the vote count.

In response, the Biden campaign said in a statement that the president's remarks "about trying to shut down the counting of duly cast ballots was outrageous, unprecedented, and incorrect."

The Biden side has "legal teams standing by ready to deploy to resist that effort," campaign manager Jen O'Malley Dillon said.

In cities across the country, many have been bracing themselves for civil unrest, with hotels, office buildings, coffee shops and restaurants boarded up before Election Day.

Demonstrations were held in cities like Washington, D.C., Los Angeles, Raleigh and Portland, with emotions flaring and dozens of arrests reported.

Peter Giavotto, a resident of Arlington, Virginia, told Xinhua outside a polling place after voting on Tuesday morning that he thinks this year's election has been "tense."

"I think a lot of people would say that it's just hard to say whichever way it goes, how people are going to react to it," Giavotto said. "And I think that's kind of the fear among people here."

In a phone interview with Xinhua, Tom Waters, a soybean and corn farmer in Orrick, Missouri, said that it would not be good to see social turbulence.

"I think it's absolutely wrong, but I think we're going to see it," Waters said. "I think we'll see rioting and looting and stealing and violence and all that regardless of the outcome of the election."