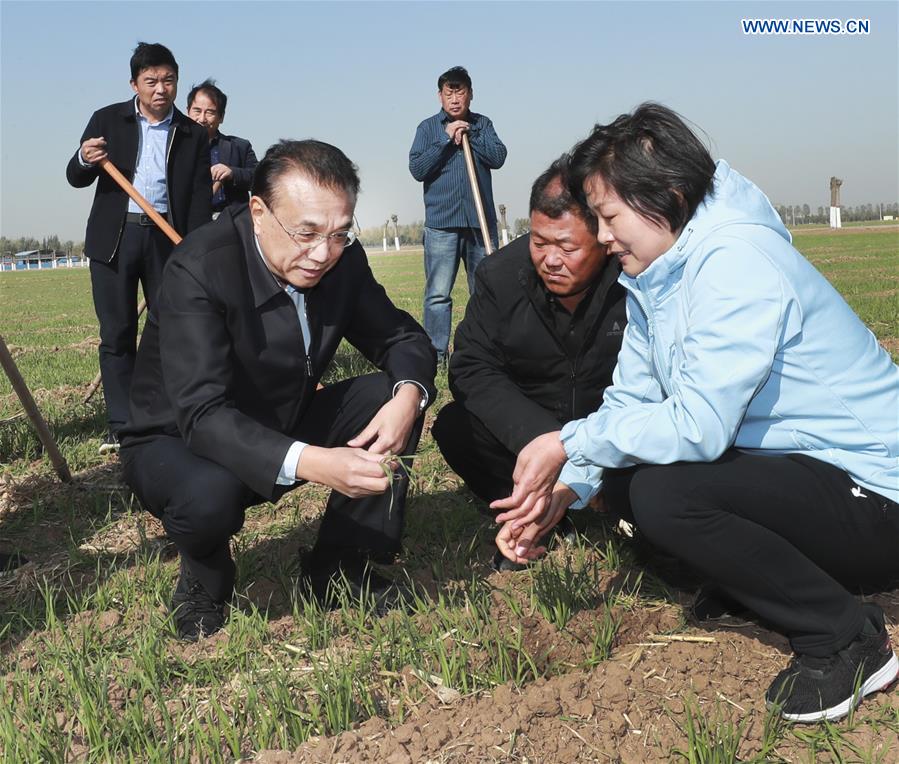 Chinese Premier Li Keqiang, also a member of the Standing Committee of the Political Bureau of the Communist Party of China Central Committee, inspects the soil condition of a field of winter wheat and talks with local farmers and agricultural technicians in Donglu Village of Anyang City, central China's Henan Province, Nov. 3, 2020. Li made an inspection tour in Anyang and Zhengzhou of Henan Province from Tuesday to Wednesday. (Xinhua/Pang Xinglei)

Chinese Premier Li Keqiang has stressed full implementation of the spirit of the fifth plenary session of the 19th Communist Party of China (CPC) Central Committee.

Li, also a member of the Standing Committee of the Political Bureau of the CPC Central Committee, made the remarks during an inspection tour in central China's Henan Province from Tuesday to Wednesday.

When visiting a field of winter wheat in Donglu Village of Anyang City, Li inspected the soil condition of the field and talked with local farmers and agricultural technicians.

Li highlighted the need to improve the varieties and quality of crops while increasing yield, and encouraged local authorities to promote agricultural modernization and develop various forms of scale management in agriculture where conditions permit.

In Anxinyuan Community, Li said that strengthening the construction of affordable housing is an important task in promoting new urbanization. He also urged Party committees and local governments to do their best and do what they can to help residents solve problems.

During his tour to a robot company and an engineering research center at Zhengzhou University, Li stressed the implementation of the spirit of the fifth plenary session of the 19th CPC Central Committee, and boosting innovative development and new industrialization.

Noting that Henan Province has a large population, Li urged the province to become a talent-rich province and play a greater role in the rise of the central region of China.

Faced with the impact of the epidemic and the world economic recession, China boosted its economy with a package of measures to stimulate the vitality of market entities, and ensured job security, basic living needs and operations of market entities, Li said.

Noting that China's economy achieved positive growth in the first three quarters, he called for efforts to achieve positive economic growth throughout the year to lay a solid foundation for future development. Enditem