Riding the waves of China's higher-level opening-up and dual circulation development pattern, AbbVie, a United States-based biopharmaceutical company, said it aims to better showcase its acceleration and innovation in the Chinese market over the next five years.

"By embracing such opportunities, the company aims to introduce more innovative therapies to China by making their Asia-Pacific or even world debuts in the country.

"With such high-speed growth in the Chinese market, the country will hopefully become the largest overseas market for AbbVie," Au said.

In May, AbbVie completed its acquisition of Allergan, expanding and diversifying its revenue base and complementing its leadership across several therapeutic areas.

During the China International Import Expo, from Nov 5-10, AbbVie announced its "Innovation, Leadership, Partnership" corporate value proposition for the company's development in China.

The value proposition resonates with the new development philosophy advocated by China and its dual circulation development pattern characterized by openness, sharing, and empowering the international society with more positive energy, Au said.

"China shows its determination to share market opportunities with the world and a sincere desire for economic recovery, which will significantly boost the confidence of Chinese and foreign investors," he added.

Attending the CIIE for the first time, AbbVie has set up two booths, covering a total area of 600 square meters. It is showcasing its innovations in the key areas of immunology, oncology, neuroscience and ophthalmology, in addition to the aesthetics portfolio at its main booth built like an innovation lab with the slogan "Innovating for tomorrow. Transforming lives today".

One of the innovative medicines on exhibit is expected to satisfy unmet medical needs among patients suffering from atopic dermatitis and is expected to be submitted for a new drug application in China soon. The estimated submission follows similar procedures with regulatory applications in the US and the European Union. The company hopes it will first get approval in China.

Also on exhibit is a new medicine for the treatment of acute myeloid leukemia, which is one of the three medicines in AbbVie's portfolio.

The company said the product has received full approval in the US and it hopes it will be available to patients in China before a lot of developed countries. It is expected to launch at least 15 innovative drugs and 48 indications in key therapeutic areas to meet people's medical needs in China over the next five years with the country's policy support.

During the CIIE, AbbVie signed strategic cooperation agreements with government agencies and organizations such as the Sichuan Provincial Health Commission and the Boao Lecheng International Medical Tourism Pilot Zone in Hainan province to collaborate in addressing major public health challenges, treating and managing chronic diseases and Internet Plus initiatives.

As an innovation and public welfare pioneer, AbbVie has always been active and enthusiastic, investing heavily in disease prevention and treatment, providing opportunities for medical staff training, and improving the management capabilities of various chronic diseases with local healthcare departments, partners said during the signing ceremony. Most agreements come from the company's initiatives, according to Au, which are a concrete manifestation of fulfilling social responsibilities.

"We believe that AbbVie will play a leading role in public welfare and inspire more companies to devote themselves to disease prevention and treatment," he said.

Dedicated to becoming a paradigm of government-enterprise cooperation, AbbVie said it is actively promoting the reform of the medical and health system. The company hopes to create a more harmonious and efficient health industry environment.

"We will give full play to a leading role of innovative biopharmaceutical companies in promoting industry development and disease prevention," Au said.

"We'll adopt an innovative business model to contribute to healthcare upgrades in China. The company's CIIE debut this year, during a phase of challenges for the world, demonstrates our continued confidence in the Chinese market and our aim to contribute to the Healthy China 2030 initiative," he explained.

The exploration of diverse collaboration models and opportunities with various organizations in China, including government agencies, hospitals and universities, to create an open, multilayered, and multidimensional healthcare ecosystem will continue to be a focus for the company.

Close collaboration with Chinese companies in the frontiers of anticancer and antiviral drugs has accelerated the launch of its innovative drugs in China, and helped Chinese companies to gain a foothold abroad, Au noted.

The company has conducted collaborations including joining hands with Beijing-based Jacobio Pharmaceuticals to develop and commercialize an SHP2 inhibitor, which acts on cancer cells and immunocytes; with BioMed, to develop a drug for preventing and treating COVID-19 caused by the SARS-CoV-2 virus; and with I-Mab Biophamar to develop an innovative anti-CD47 monoclonal antibody for treating multiple cancers.

At AbbVie's other booth located in the Public Health and Epidemic Prevention Zone, the company is exhibiting its global efforts in response to COVID-19. They include a donation of antiviral medicine worth 13 million yuan ($1.97 million) and a potential antibody therapy that is being jointly researched and developed with Harbour BioMed, a Chinese biotech company, and two universities in the Netherlands, according to the company.

In addition, the company said there are several research and development projects between AbbVie and homegrown pharmaceutical businesses underway. They include collaboration with Jacobio to develop a phosphatase inhibitor. 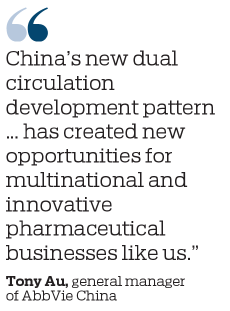