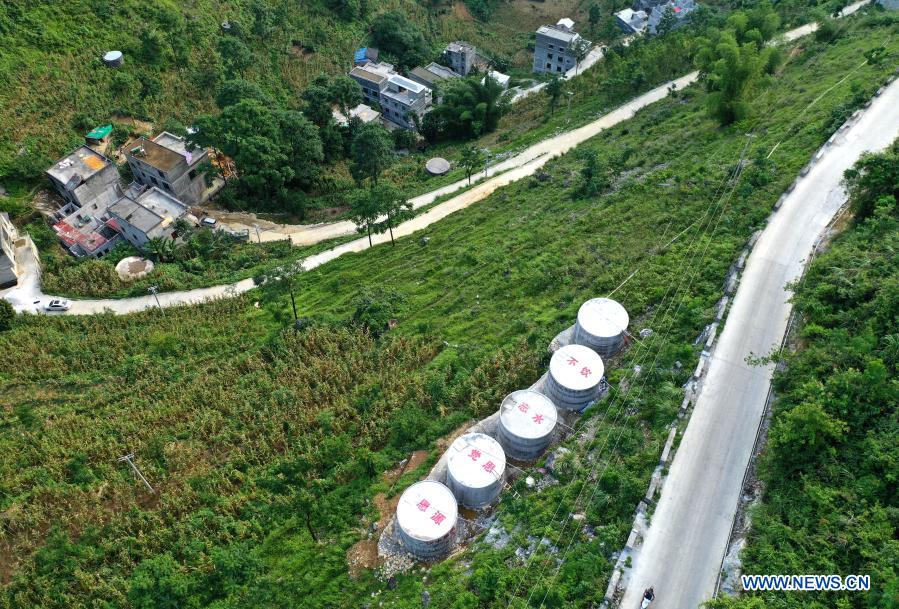 In a statement, the cities of Liuzhou, Baise, and Hechi, where the eight counties are located, are asked to synergize efforts to consolidate the achievements of poverty alleviation with the rural vitalization strategy to prevent people from returning to poverty.

Since 2016, nearly 73 billion yuan (11.11 billion U.S. dollars) have been allocated to poverty alleviation projects across the region, covering fields of infrastructure, employment, education, and medical and healthcare services.

Guangxi, as one of the areas in China facing the worst stony desertification, has poured over 48 billion yuan in upgrading roads in rural areas since 2016, according to the regional department of transportation.

A total of 35 counties out of the 54 poverty-stricken counties are in Karst landscapes covered with rocks.

The expanded road network and improved infrastructure have helped farmers in the areas to sell their agricultural products outside their hometowns, bringing them a stable and sustainable income.

Villagers in stony deserts have also benefited from relocation projects to shake off poverty. In the past five years, Guangxi has relocated around 710,000 people from remote and uninhabitable mountainous areas to the central regions of counties and cities.

A bustling urban lifestyle has become commonplace in Dahua Yao Autonomous County, where over 10,000 people from deep mountain areas have settled down over recent years.

Commercial streets, hotels, night markets, and a huge cultural plaza have been built in the relocation area.

"I never imagined that I could live in such a great place, which I used to admire," said Qin Qingmei, who set up a snack stand in the local food street. Before moving to her new home in Dahua, she had to work far away from home for better payment.

Registered poverty-stricken households that have benefited from the industry not only receive dividends from local businesses but also earn a salary from cooperatives where they take up farming.

By the end of October this year, a total of 4,377 workshops, supported by local governments in the region, have created jobs for 302,000 people, 56,400 of whom are from poverty-stricken households, according to the regional department of human resources and social security.

With over 20 million people of various ethnic minority groups out of the total population of 50 million people, Guangxi's anti-poverty achievement has brought the country one step closer to the goal of ending poverty by the end of 2020. Enditem