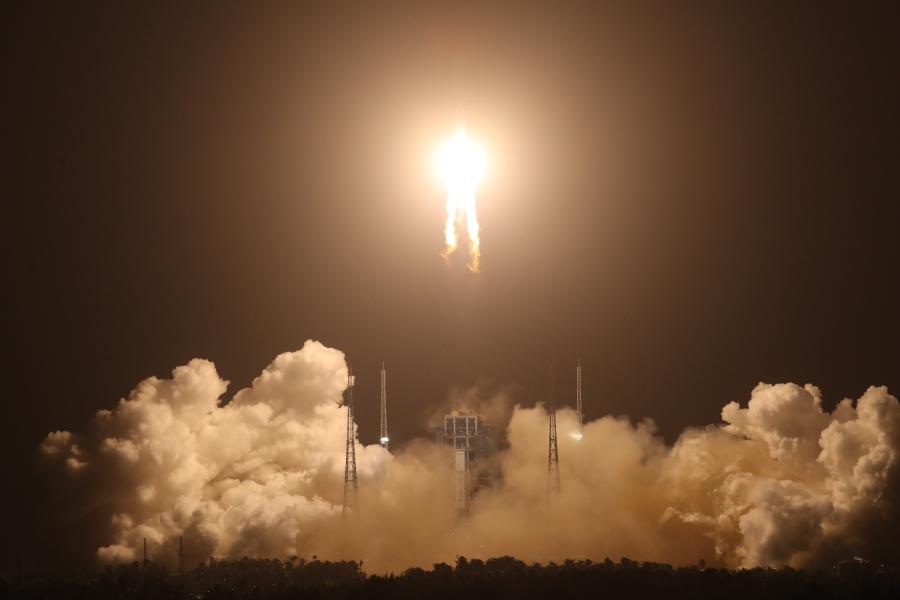 A Long March-5 rocket, carrying the Chang'e-5 spacecraft, blasts off from the Wenchang Spacecraft Launch Site on the coast of southern island province of Hainan, Nov. 24, 2020. China on Tuesday launched a spacecraft to collect and return samples from the moon, the country's first attempt to retrieve samples from an extraterrestrial body. (Xinhua/Jin Liwang)

China successfully launched its most complicated and challenging lunar mission on Tuesday, and is promising to share the moon samples expected to be returned by the spacecraft.

"Chinese scientists and those from other countries all have a chance to get the lunar samples to be brought back by Chang'e-5 for research," said Pei Zhaoyu, deputy director of the Lunar Exploration and Space Program Center of the China National Space Administration (CNSA).

Chang'e-5, the probe, is designed to land on the northwest region of Oceanus Procellarum, also known as the Ocean of Storms, on the near side of the moon in early December, and collect and return about 2 kilograms of samples.

If successful, it will be the first retrieval of lunar samples since the missions of the United States and the Soviet Union in the 1960s and 1970s.

More excitingly, its landing site, never sampled before, is geologically younger than the sampling areas of the U.S. and the Soviet missions, so the new samples will help fill in an important piece in the jigsaw puzzle of the moon's history.

Many foreign scientists and space agencies have contacted China to ask about using the samples for research, Pei said.

Lunar scientists will be eager to study the new samples because of what they might learn about the moon's evolution, said an article published by the journal Nature.

Aware of the scientific value, China has decided to share the lunar samples from the outset, as it has always viewed space exploration as a common cause of humanity and hoped to promote it through international exchanges and cooperation.

Its open attitude toward international space cooperation has already brought benefits to its foreign partners. China's last lunar mission, Chang'e-4, which made the first-ever soft landing on the far side of the moon, carried payloads developed by the Netherlands, Germany, Sweden and Saudi Arabia.

The data has helped deepen understanding of the lunar and space environment as well as solar activities.

It has opened its planned space station to international payloads, and offered to carry a total of 20 kg of payloads for both Chinese and foreign organizations in its future Chang'e-6 mission.

It is even considering launching an initiative to call for joint efforts to build an international lunar research station, said Pei.

The plans demonstrate China's commitment to international cooperation and shared growth. Although China is now taking the lead in lunar exploration through decades of independent innovation in space technologies, it has always been committed to sharing the achievements. Enditem