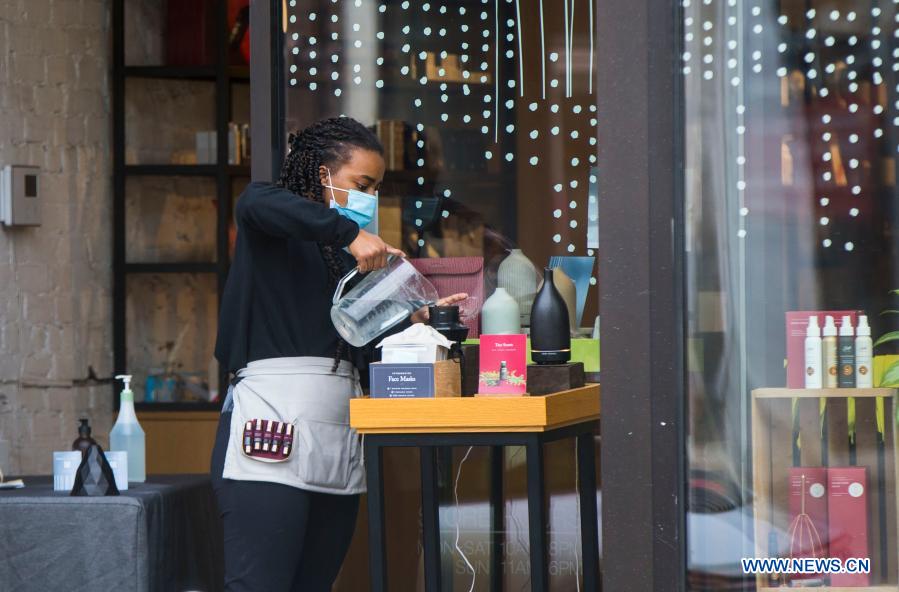 A shop assistant wearing a face mask works outside a store in Toronto, Canada, on Nov. 24, 2020. The number of COVID-19 cases in Canada continued to increase as the country reported a total of 340,388 cases and 11,592 deaths as of Tuesday afternoon, according to CTV. (Photo by Zou Zheng/Xinhua)

The number of COVID-19 cases in Canada continued to increase as the country reported a total of 340,388 cases and 11,592 deaths as of Tuesday afternoon, according to CTV.

The country confirmed the average daily COVID-19 case count standing at 5,050 cases for the past seven days, according to the Public Health Agency of Canada on Tuesday.

Over the past week, labs across Canada have tested an average of over 75,500 people daily, with 7.6 percent testing positive. There were on average over 2,000 individuals with COVID-19 being treated in hospitals, including over 415 in critical care, and an average of over 70 deaths were reported each day, said the agency.

"Following last week's epidemiology and modeling update, it's clear that we need to strengthen our response. Specifically, to bring down the rapid rate of growth, we need to combine a range of public health measures with tightened prevention practices by individual Canadians," said Canadian Chief Public Health Officer Theresa Tam in a statement on Tuesday.

The modeling released last Friday showed that on nearly every metric, the COVID-19 crisis was worsening. By the end of November, Canada is projected to hit between 366,500 to 378,600 total cases, and between 11,870 to 12,120 deaths, and the country could be recording 20,000 cases a day into December.

"Some areas are experiencing very high rates of infection for the first time. Nunavut has implemented territory-wide restrictions, some of the Atlantic provinces have seen an increase in cases, and the Prairie provinces now have some of the highest infection rates in the country and are feeling a heavy strain on their healthcare systems," Tam said.

She pointed out that there has also been a change in the age trend. "In the early days of this resurgence, we saw high rates of infection among young adults. Now we are seeing an increase in rates in older adults aged 80 years and older, who are at much higher risk of serious complications and death."

Although it is still too early to know the impact of strengthened public health measures implemented in areas across Canada, Tam said "we do know from the experience of many other countries that to be successful a package of measures is required and it's not one size fits all. "

"Most importantly, we know that public participation is vital to success," Tam added in the statement. Enditem