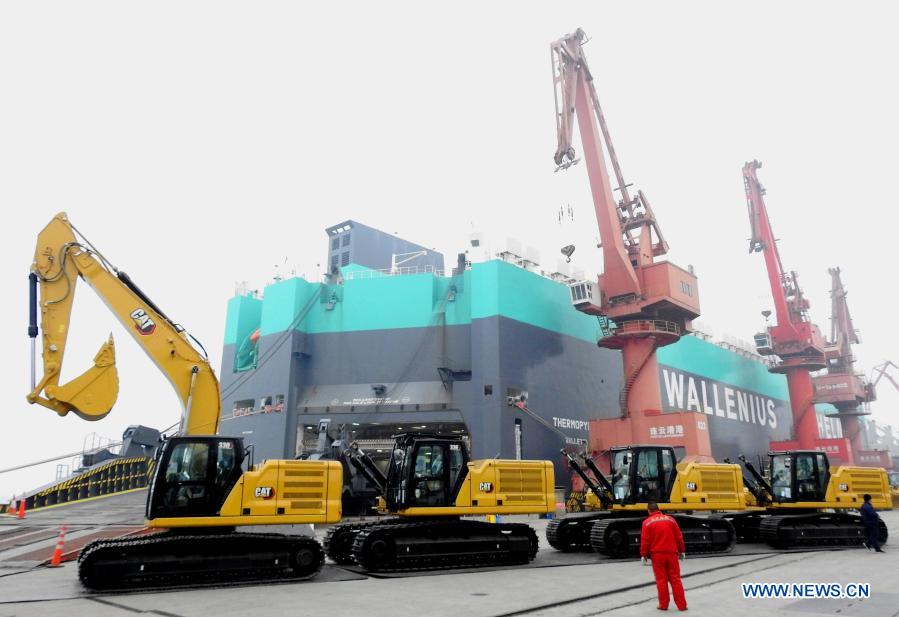 A batch of engineering equipment waits to be loaded and shipped abroad at the Lianyungang Port in Lianyungang City, east China's Jiangsu Province, Dec. 7, 2020. In the first 11 months, China's foreign trade of goods totaled 29.04 trillion yuan (about 4.44 trillion U.S. dollars), up 1.8 percent year on year, accelerating from an increase of 1.1-percent in the first 10 months, the General Administration of Customs said in a statement. (Photo by Geng Yuhe/Xinhua)

In the first 11 months, China's foreign trade of goods totaled 29.04 trillion yuan (about 4.44 trillion U.S. dollars), up 1.8 percent year on year, accelerating from an increase of 1.1-percent in the first 10 months, the administration said in a statement.

"The accelerated growth in foreign trade reflects China's strong economic resilience," said Zhuang Rui, a researcher with the Academy of China Open Economy Studies under the University of International Business and Economics.

General trade, involving longer production chains and better reflecting the country's manufacturing strength, edged up 3.2 percent during the 11-month period, taking a larger share of the total trade of goods.

The Association of Southeast Asian Nations remained China's largest trading partner during the period, followed by the European Union and the United States.

Private companies played a significant role in propelling trade growth, with their foreign trade expanding by 11.3 percent in the first 11 months to account for 46.4 percent of the country's total.

Mechanical and electrical products took the lion's share of the country's exports, with their export value reaching 9.57 trillion yuan in the first 11 months, up 5.4 percent year on year.

China's foreign trade has steadily recovered from the woes of the COVID-19 pandemic in recent months thanks to government policies to stabilize the sector.

To mitigate the epidemic's impact on foreign trade firms, the country has streamlined customs procedures and rolled out incentives for cross-border e-commerce as well as introduced other innovative trade forms.

China has shortened the catalog of technologies prohibited or restricted from import, and taken steps to strengthen intellectual property protection.

The country has also vowed to set up 10 demonstration zones to promote imports, where innovative regulatory systems and flexible trade models will be piloted.

In its latest effort to open the market and boost trade, China signed the Regional Comprehensive Economic Partnership agreement, the world's largest free trade deal, with 10 ASEAN member countries and Japan, the Republic of Korea, Australia and New Zealand in mid-November.

As China actively promotes the negotiations and signing of more free trade agreements, the country will see the scale and quality of foreign trade improve, Zhuang said. Enditem