President Xi Jinping sent a letter of congratulations on Thursday to the country's first vocational skills competition, as China is striving to expand the skilled workforce to support the development of manufacturing and innovation industries.

Xi, who is also general secretary of the Communist Party of China Central Committee and chairman of the Central Military Commission, said that the competition provides a platform for workers to display their skills and learn from each other.

The Vocational Skills Competition, which kicked off on Thursday in Guangzhou, Guangdong province, is recognized as the nation's first since the founding of the People's Republic of China. The three-day event has 2,557 competitors in 36 delegations, according to its organizers.

In the congratulatory letter, Xi said that the competition plays a positive role in expanding the skilled workforce and promoting socioeconomic development.

He said that skilled workers are the major power supporting the development of the nation's manufacturing and innovation industries, and called on all levels of government to attach more importance to training skilled workers, especially the younger generation.

In an instruction delivered to the competition, Premier Li Keqiang said that improving working skills is a crucial foundation to enhance the capabilities of China's manufacturing and services industries. He called for efforts to further enhance the training system for skilled workers, create a better environment for skilled talents and guide young workers to perfect their skills, in a bid to boost employment, entrepreneurship and innovation in the country and ensure high-quality economic growth. 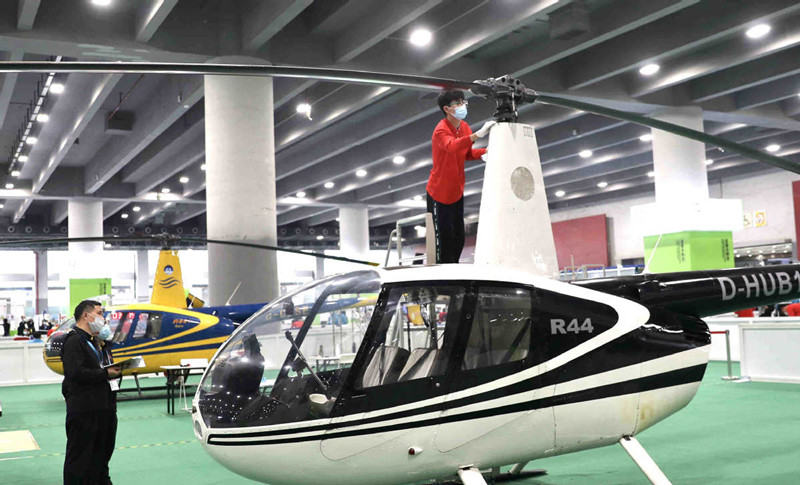 A contestant participates in the helicopter maintenance category of the first Vocational Skills Competition in Guangzhou, Guangdong province, on Thursday. More than 2,500 contestants are taking part in the three-day event. ZOU HONG/CHINA DAILY

The competition covers 86 events including industrial control, beauty treatment, hairdressing and carpentry. It is also viewed as an exercise for the 46th World Skills Competition in Shanghai in 2022.

With the youngest competitor aged 16, the contest has attracted people from different age groups. The most senior competitor is 58.

Jiang Guowei, deputy director of the training center of Jiangsu Electric Power Construction Co, is the coach of 26-year-old competitor Zhang Chuangye in the welding event.

He said that Zhang has worked in the company for about six years and his adept working skills have highly impressed his colleagues.

"Basic skill is our first consideration, but it's not the only quality," he said."What we want is a worker to possess good skills, potential and a fine personality, because all the skills will finally serve the development of a company and the industry."