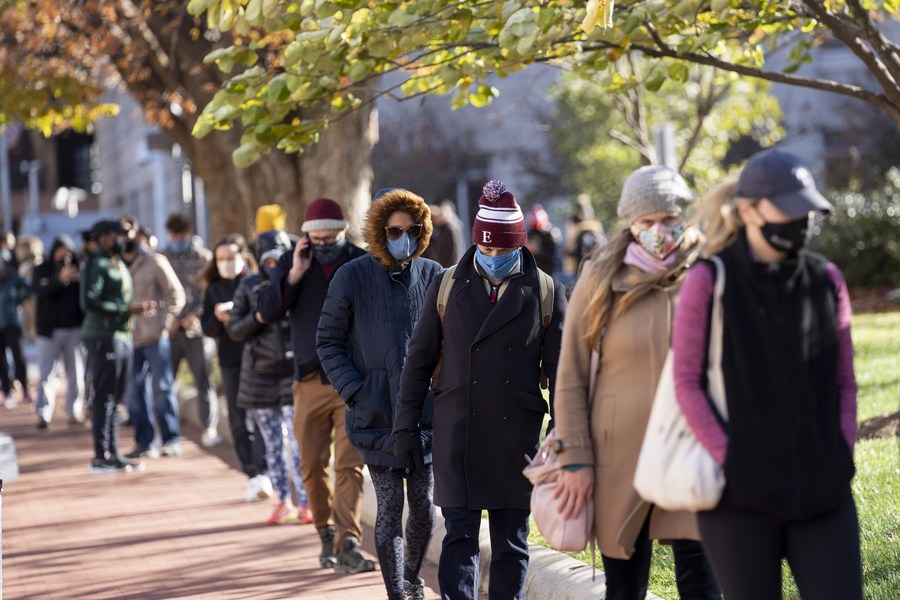 "While vaccines offer a light at the end of the tunnel, the labor market will remain under pressure in the short run," an economist said.

The number of initial jobless claims in the United States rose to reach 853,000 last week, the highest since mid-September, the Labor Department reported on Thursday.

The latest data indicated that recent spikes in COVID-19 cases have been disrupting the labor market and weighing on economic recovery.

In the week ending Dec. 5, the number of Americans filing for unemployment benefits increased by 137,000 from the previous week's upwardly revised level of 716,000, according to a report released by the department's Bureau of Labor Statistics (BLS).

In the week ending Oct. 17, the figure dipped below 800,000 for the first time since late March, and has been largely declining in the following weeks, until the trend was reversed in the weeks ending Nov. 14 and Nov. 21 amid surging COVID-19 cases.

"We can no longer think of claims being in a trend decline given the fact that they have increased in three out of the past five weeks and are higher today than at any point since September," Tim Quinlan, senior economist at Wells Fargo Securities, wrote in an analysis. 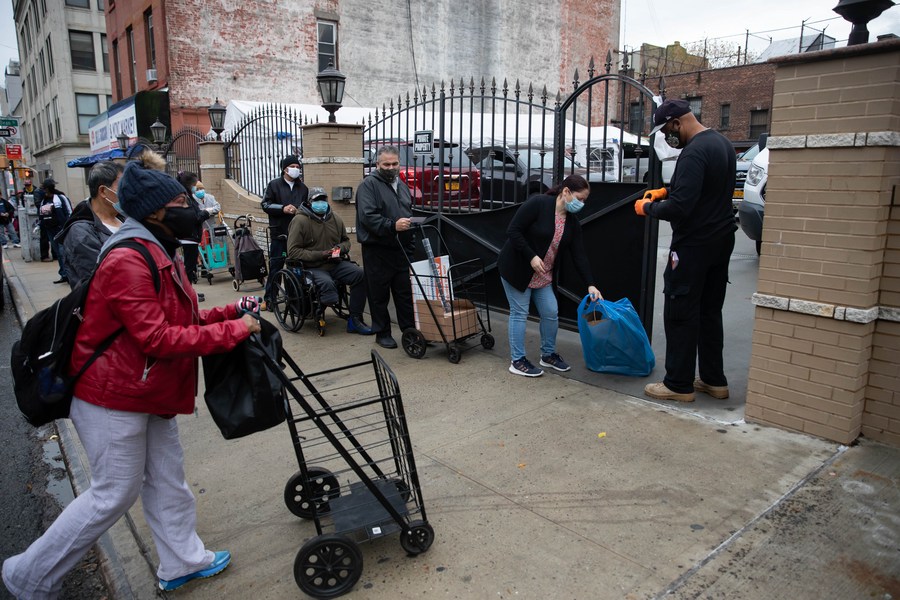 People line up outside a food pantry in Brooklyn, New York, United States, on Nov. 12, 2020. (Photo by Michael Nagle/Xinhua)

"In an indication of the increased difficulty people are having finding a replacement job, continuing claims rose for the first time since they hit a peak in May," Quinlan noted.

The BLS report showed that the number of people continuing to collect regular state unemployment benefits in the week ending Nov. 28 increased by 230,000 to 5.76 million.

Meanwhile, the recipients of Pandemic Emergency Unemployment Compensation (PEUC), a federal program that provides an additional 13 weeks of benefits for those who exhaust regular state benefits, dropped by 36,140 to reach 4.53 million in the week ending Nov. 21.

The total number of people claiming benefits in all programs -- state and federal combined -- for the week ending Nov. 21 fell by 1.1 million but remained elevated at 19 million, indicating the pandemic's severe hit to the labor market. 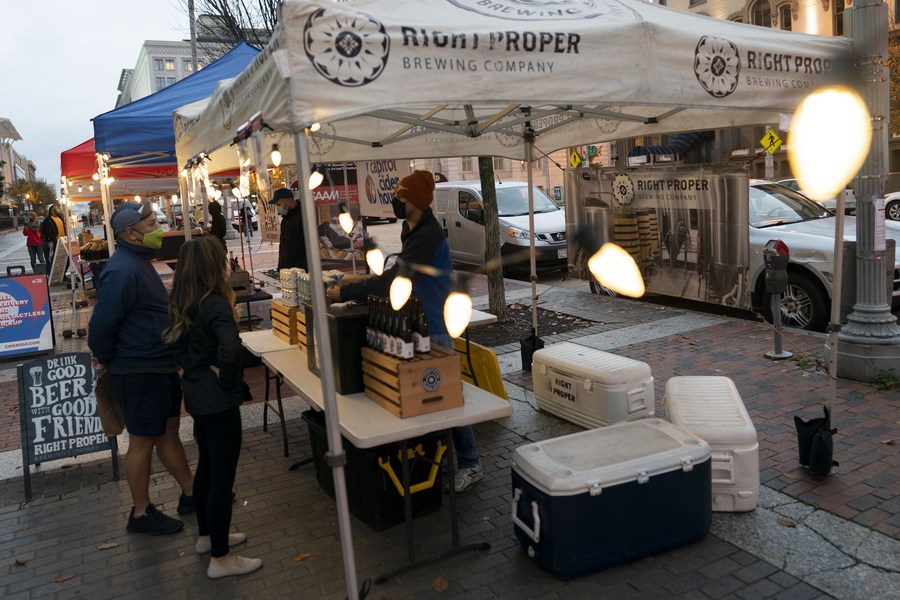 Both PEUC, and the Pandemic Unemployment Assistance (PUA) program, which applies to workers who usually do not qualify for regular state unemployment benefits, such as the self-employed and gig workers, are set to expire on Dec. 31, but Congress has been in a deadlock for months over a new round of coronavirus relief.

The Democrats-controlled House of Representatives in early October passed a 2.2-trillion-U.S.-dollar relief bill. Some Senate Republicans, however, insisted on a relief package below 1 trillion dollars, and failed to advance a 500-billion-dollar bill in late October.

Pelosi and Senate Majority Leader Mitch McConnell have recently said that they want to attach the long-awaited COVID-19 relief legislation to an omnibus funding bill. 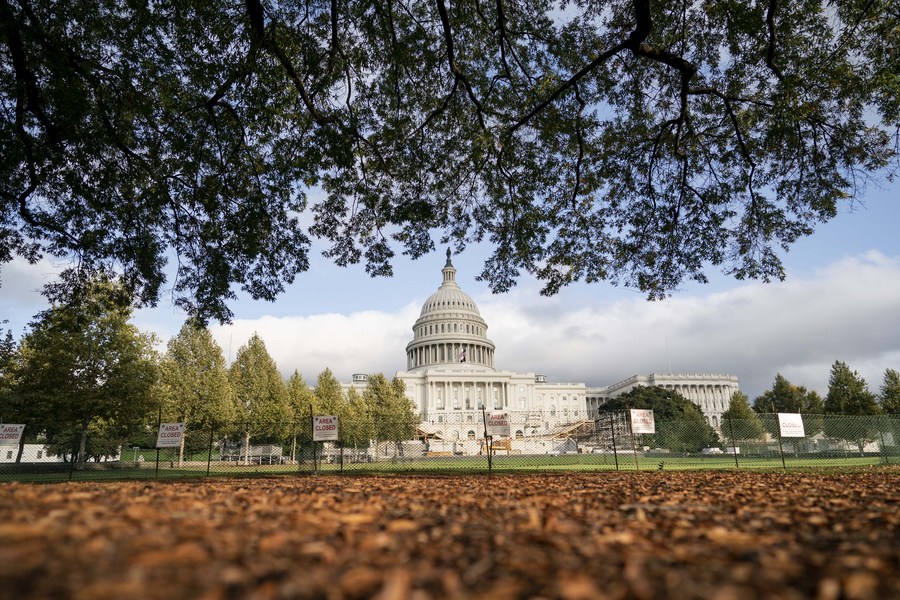 The House on Wednesday passed a one-week stopgap funding bill to keep the federal government open through Dec. 18, providing more time for lawmakers to negotiate a deal in COVID-19 relief and long-term government funding.

In a letter to Congress earlier this week, the U.S. Chamber of Commerce warned that failure to enact a meaningful pandemic package "risks a double-dip recession that will permanently shutter small businesses across the nation and leave millions of Americans with no means to support themselves and their families."

As of Monday, 17 percent of restaurants, or more than 110,000 establishments, were closed permanently or long-term amid the COVID-19 crisis, according to the National Restaurant Association.

The U.S. Centers for Disease Control and Prevention on Wednesday reported a seven-day moving average of 202,021 new COVID-19 cases, the first time it has surpassed 200,000 since the outbreak. Total cases in the United States have topped 15 million.

"While vaccines offer a light at the end of the tunnel, the labor market will remain under pressure in the short run," Quinlan said.