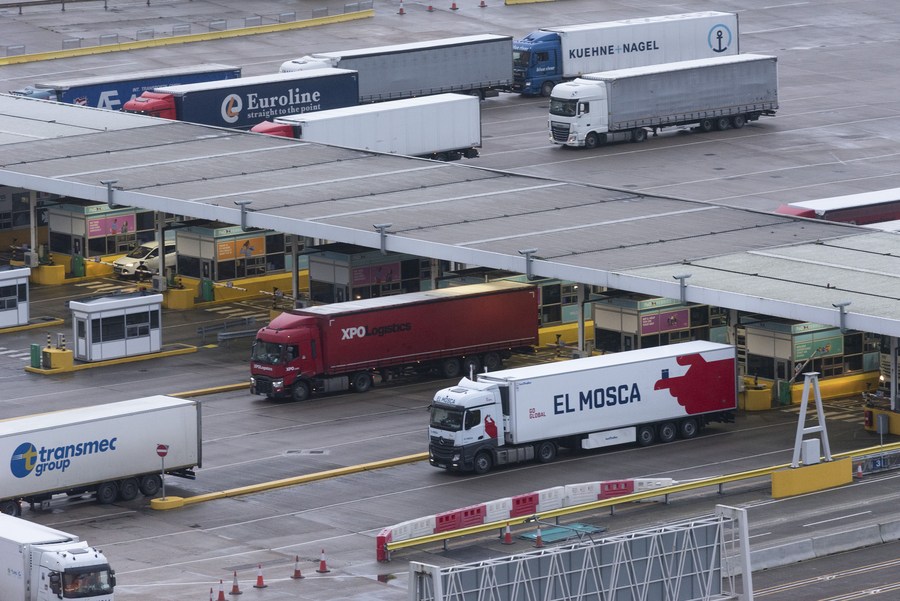 Trucks arrive at the Port of Dover to cross the Dover Strait on the first day after Brexit in Dover, Britain, Feb. 1, 2020. (Photo by Ray Tang/Xinhua)

British Prime Minister Boris Johnson said Monday that Britain and France are working to unblock the cross-channel trade "as fast as possible."

Johnson made the statement when he was speaking at a virtual press conference at Downing Street after the French government banned trucks entering from Britain over concerns about the highly transmissible new coronavirus strain.

Johnson said he had just had "a very good call" with French President Emmanuel Macron to solve the issue.

"I have just spoken to President Macron, we had a very good call. And we both understand each other's positions and want to resolve these problems as fast as possible," said the prime minister.

"We are working with our friends across the Channel to unblock the flow of trade as fast as possible," he said.

France has closed its border with Britain for 48 hours, with no lorries or ferry passengers able to sail from the port of Dover.

Johnson said the disruption at Dover will not affect the vast majority of food and medical supplies, adding that the government has been preparing for such a situation for a while.

"These delays are only occurring at Dover, only affect human-handled freight and that is only 20 percent of the total arriving from or departing to the European continent," he said.

More than 40 countries including Germany, India, Italy, the Netherlands, Belgium, Austria, Denmark, Ireland, and Bulgaria have announced travel restrictions from Britain following the disclosure that the highly infectious new strain is widespread in parts of Britain.