-- British Health Secretary Matt Hancock warned that a new strain of COVID-19 is "out of control" in Britain.

-- The new variant may be up to 70 percent more transmissible, according to Prime Minister Boris Johnson, who announced stronger coronavirus restrictions.

-- The good news is that no evidence has yet been found that the new strain could affect the effectiveness of vaccines.

-- European countries and Canada began to ban flights from Britain.

For Britons, Europeans and perhaps a significant number of people around the world, the coming Christmas holiday is like no other -- a "coronavirus Christmas" when people will be largely grounded indoors as they are bracing themselves for a challenging time together.

A highly infectious new strain of the coronavirus recently reported in Britain has sounded fresh alarm on COVID-19 which has infected more than 77 million people and caused over 1.7 million deaths worldwide.

The new variant has sent Britons particularly on another "rollercoaster" ride of their emotions as the planned relaxation of coronavirus rules for Christmas was replaced by yet tougher new measures rolled out Saturday.

Countries have followed suit to announce plans to ban flights from Britain over concerns about a further spread of the new virus strain in this grave battle between virus and vaccines.

British Health Secretary Matt Hancock on Sunday warned that a new strain of COVID-19 is "out of control" in Britain.

"It is going to be very difficult to keep it under control until we have the vaccine rolled out," he said. "We know with this new variant you can catch it more easily from a small amount of the virus being present. 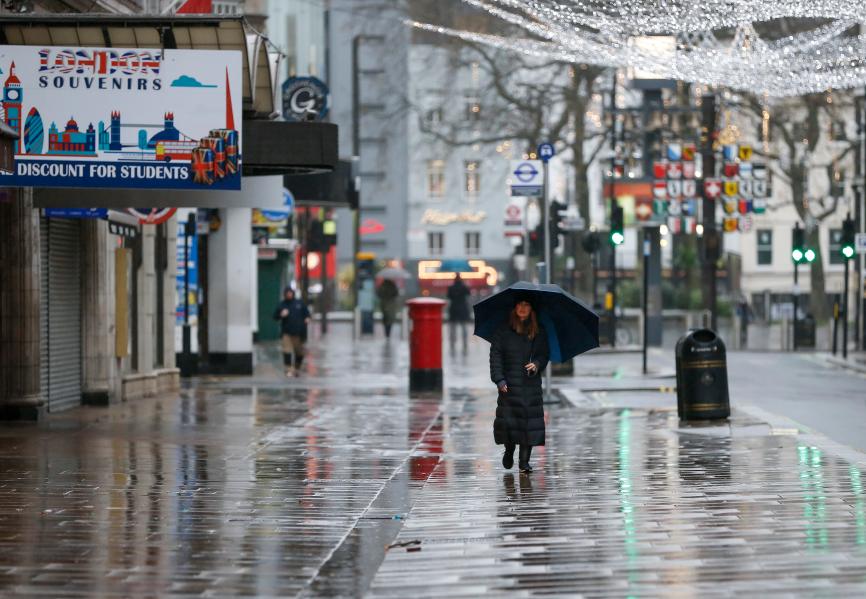 A woman walks on an empty street near Leicester Square in London, Britain, on Dec. 21, 2020. (Xinhua/Han Yan)

The British government's Chief Scientific Adviser Patrick Vallance has said the new variant was first seen in mid-September in London and Kent.

By December, the new variant had become the "dominant variant" in London, and by the week ending Dec. 9, it had accounted for 62 percent of cases in London, 59 percent of those in eastern England, and 43 percent in the south-east, according to Vallance.

"New variant may be up to 70 percent more transmissible," he told a Downing Street virtual press conference, adding the spread is being driven by the new variant of the virus.

The new COVID-19 strain has prompted fresh alarm for countries which have been struggling to contain the already rampant coronavirus. 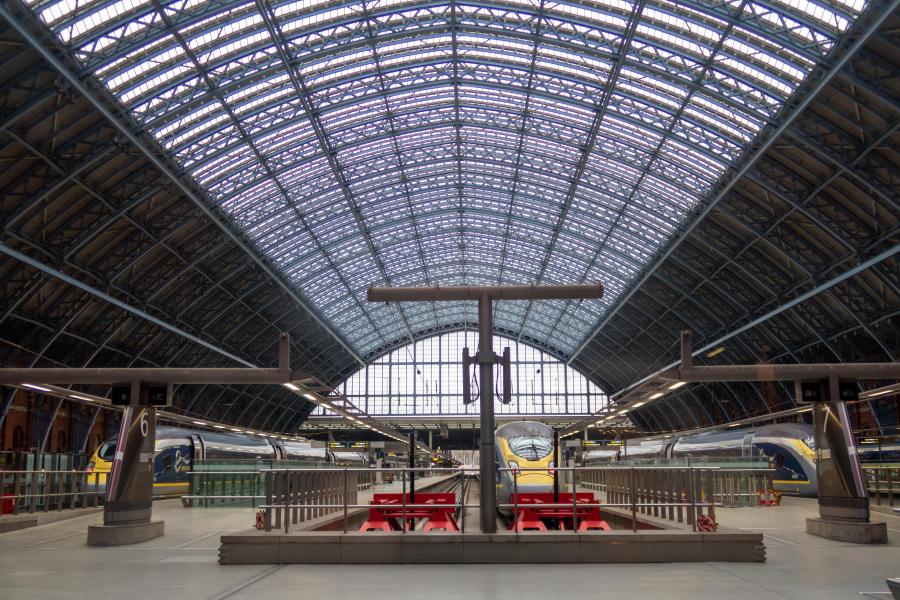 In Britain, the planned relaxation of coronavirus rules for Christmas -- which allowed up to three households to meet during five days around Christmas -- was scrapped for a large part of south-east England, and cut to one day for rest of the region, according to the prime minister.

From Sunday morning, London, and the southeast and east of England have moved into Tier Four restrictions, which require residents to stay at home, with limited exemptions. People are also urged to work from home when they can, and should not enter or leave Tier Four areas.

After the announcement about the new virus strain, the Netherlands became the first major European country to announce a ban on flights to Britain, followed by neighboring Belgium which also halted Britain-bound trains using the Channel Tunnel.

Scottish First Minister Nicola Sturgeon effectively closed the border with England, announcing people could not enter or leave Scotland. Police Scotland said it had doubled the number of officers stationed on the English border. 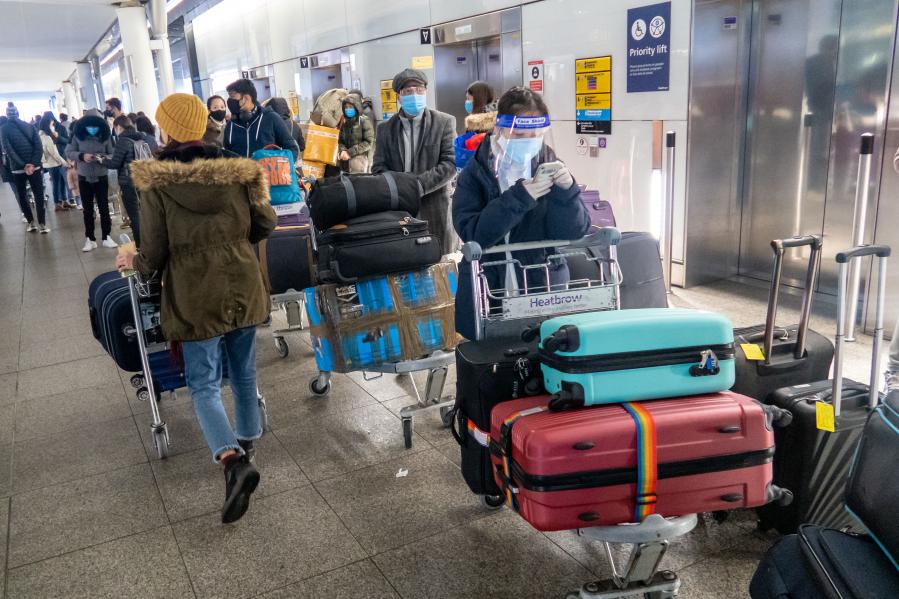 People queue to enter the departures area at Heathrow Airport in London, Britain, on Dec. 21, 2020. A number of European countries on Dec. 20 began to ban flights from Britain following the emergence of a highly infectious variant of coronavirus. (Photo by Tim Ireland/Xinhua)

More countries including Canada, Switzerland, France and Germany are also following suit to ban flights from Britain amid rising concerns over the highly infectious new strain.

These restrictions as well as travel bans have thrown into chaos the Christmas plans of hundreds of thousands of people in Britain and other European countries who intend to spend the holidays with families and friends on either side of the English Channel.

As the pandemic continues to dampen economies and overwhelm health systems, many countries are pinning their hopes of defeating the pandemic on vaccines.

According to the World Health Organization (WHO), as of Dec. 16, 222 COVID-19 candidate vaccines are being developed worldwide, with 56 of them under clinical trials.

The good news is that no evidence has yet been found that the new strain could affect the effectiveness of these vaccines.

"So far, even though we've seen a number of changes, a number of mutations, none has made a significant impact on either the susceptibility of the virus to any of the currently used therapeutics, drugs or the vaccines under development," WHO Chief Scientist Soumya Swaminathan told a press briefing on Monday.

Meanwhile, according to Mike Ryan, executive director of the WHO Health Emergencies Program, even with the latest UK variant of the coronavirus, "there's zero evidence at this point that there's any increase in severity associated with this disease."

He reiterated that no variants have yet established themselves as "having any higher level of severity, or invading our diagnostics, or hiding from vaccines, or the effectiveness of vaccines."

The UK variant is currently not affecting most of the COVID-19 diagnostic tests either, said Maria Van Kerkhove, technical lead on COVID-19 response at the WHO Health Emergencies Program, as most of the tests are looking at multiple targets within the genome.

But very few tests that have only looked at a single target may be impacted in detecting this particular variant, she added.

Besides urging the public to keep implementing existing public health measures, including wearing masks, hand hygiene and social distancing, the WHO experts also emphasized the importance of continuously monitoring what is happening to this virus, with the focus on bringing transmission down and getting it as low as possible.

"That (the UK variant) just put the barrel up a little bit; in some senses, it means we have to work harder," said Ryan. "Even if the virus has become a little bit more efficient in spreading, the virus can be stopped."