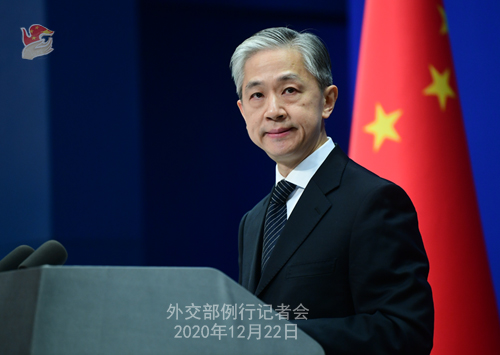 Beijing slammed the United States on Tuesday for using visa policy as a weapon to disrupt normal bilateral people-to-people exchanges, and it vowed to take necessary and legitimate measures to safeguard its interests.

Foreign Ministry spokesman Wang Wenbin made the remarks after US Secretary of State Mike Pompeo announced on Monday that Washington was imposing additional visa restrictions on Chinese officials over alleged human rights abuses.

Earlier this month, the US had announced visa restrictions on Chinese officials in the United Front Work Department as well as sanctions against 14 vice-chairpersons of the Standing Committee of the National People's Congress.

Over the past four years, the US has repeatedly imposed visa restrictions on Chinese personnel under the pretext of issues relating to Hong Kong, the Tibet autonomous region and the Xinjiang Uygur autonomous region affairs, as well as human rights and religion, Wang said at Tuesday's daily news conference.

China opposes and deplores such practices, which severely interfere in China's internal affairs and harm bilateral relations, he said.

On Dec 10, the ministry announced reciprocal sanctions against US officials and personnel for their egregious behavior on Hong Kong issues, and it revoked US diplomatic passport holders' visa exemptions for temporary visits to Hong Kong and Macao.

"We urged the US to correct its wrongdoings and cancel the so-called visa sanctions," Wang said.

On Monday, the US Congress passed a $2.3 trillion spending bill for fiscal 2021 that included provisions for the Taiwan Assurance Act of 2020 and the Tibetan Policy and Support Act.

He warned Washington to refrain from signing into law and putting into practice the negative clauses and acts that target China and damage its interests.