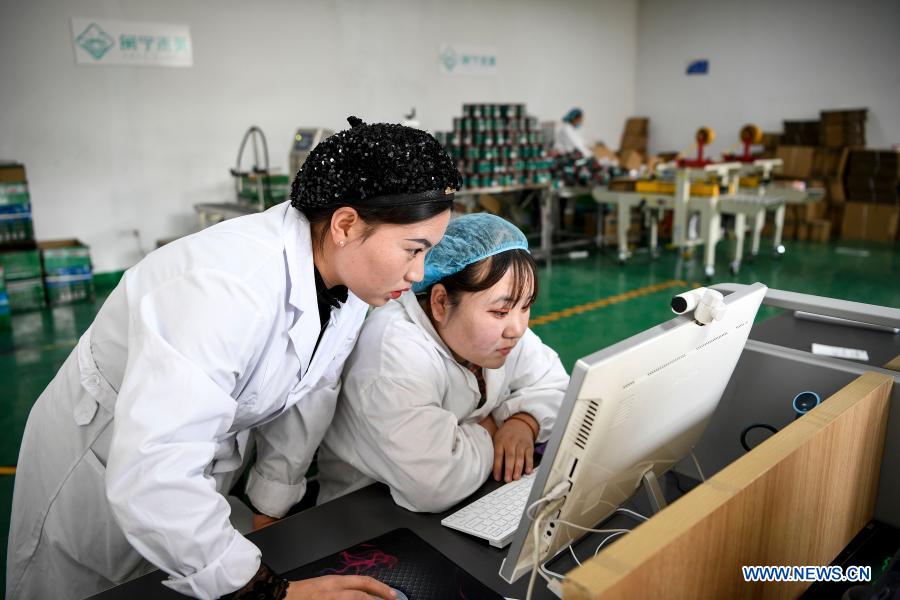 Hai Yan (L) and Ma Danli work at a Minning Hemei e-commerce poverty alleviation workshop in Yuanlong Village in Minning Township in Yinchuan, northwest China's Ningxia Hui Autonomous Region, Nov. 11, 2020. Xihaigu, one of China's most impoverished areas located in Ningxia, saw its last impoverished county removed from the national poverty list on Nov. 16, 2020. Over 60,000 farmers in Xihaigu have been relocated to Minning Township, which has converted from a town in Gobi desert to a modernized ecological relocation demonstration town over the past two decades via a series of cooperation between Ningxia and southeast China's Fujian Province. The victory is regarded as another landmark in China's campaign to eradicate absolute poverty, during which "she power" played an indispensable role. In 2019, an e-commerce poverty alleviation workshop, which sold specialties of Ningxia, was established in Yuanlong Village of Minning. It employed 42 women from impoverished households. In 2020, due to the outbreak of COVID-19, the workshop decided to sell the products via livestreaming to promote sales. It set up a livestreaming team consisting of six female employees including Hai Yan, Ma Yan, Bai Xiyan, Ma Yunsu, Ma Danli, and Yang Junying. Most of the team members had dropped out of school before entering middle school, but they accepted the challenges and learned new skills from scratch with great enthusiasm. From negotiating with merchants to introducing products in front of cameras to audiences, they are able to handle different works with more confidence. (Xinhua/Yang Zhisen)