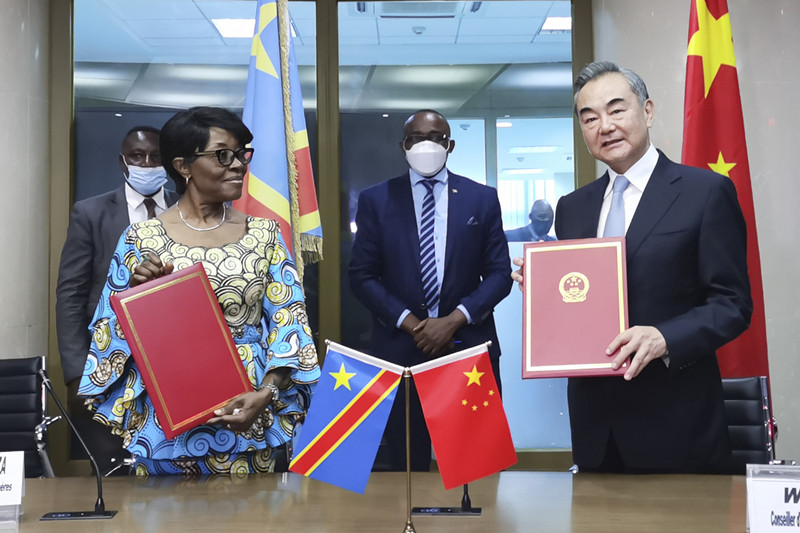 The Democratic Republic of Congo became the 45th African country to sign a cooperative document on co-building the Belt and Road with China, marking the initiative's growing circle of friends and its ability to survive the economic headwinds amid the COVID-19 pandemic.

The document was signed in the wake of talks between China's State Councilor and Foreign Minister Wang Yi and DRC Minister of State and Minister of Foreign Affairs Marie Tumba Nzeza in the Central African country's capital Kinshasa on Wednesday.

Up to December, China had signed 202 cooperation documents with 138 countries and 31 international organizations on BRI cooperation, according to Foreign Ministry spokesman Wang Wenbin.

Last month, China and the African Union signed a cooperation plan on jointly advancing the Belt and Road, the first of its kind signed between China and a regional organization of international significance.

Zhu Jing, Chinese ambassador to the DRC, noted that economic and trade cooperation between the two countries has soared despite the pandemic, showing great vitality and resilience.

In the first 10 months of 2020, bilateral trade increased by 34.4 percent year-on-year, and a number of new investment projects were launched, Zhu told local media on Monday.

The trade momentum reflects great potential and complementarity between the two countries, and the Wednesday signing of the China-DRC Belt and Road document will send a positive signal to the world that both countries are committed to common development and prosperity, Wang said.

The signing will lead the economic circles of the two countries to further strengthen cooperation, inject stronger dynamism into win-win bilateral cooperation and introduce a broader prospect to two-way relations, Wang added.

In their talks, Nzeza told Wang that the DRC welcomes further investment from China and it anticipates greater cooperation in areas such as agriculture and education.

Wang arrived in the country ahead of the DRC taking the rotating chairmanship of the African Union later this year.

Wang said China supports the DRC in fulfilling its duties as the AU chair country as China and Africa are a community with a shared future.

He said China is ready to step up communication and cooperation with the DRC, as seen in areas such as the Forum on China-Africa Cooperation, which has played an important role in promoting China-Africa relations and the development of African countries.

China congratulates the commencement of the African Continental Free Trade Area on Jan 1 this year, supports Africa's efforts to strengthen itself through unity and promote integration, and hopes that Africa will play a bigger role in international affairs, Wang said.