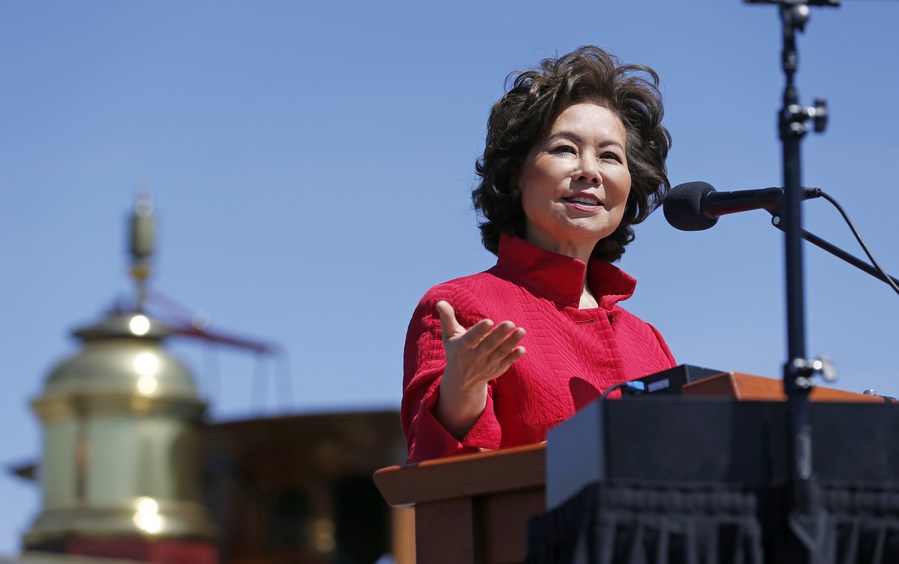 U.S. Secretary of Transportation Elaine L. Chao delivers a speech during the celebration for the 150th anniversary of the completion of the nation's first transcontinental railroad, to which thousands of Chinese railroad workers have made great contribution, at the Golden Spike National Historical Park at Promontory Summit, Salt Lake City, the United States, May 10, 2019. (Xinhua/Li Ying)

Elaine Chao is the first member of outgoing President Donald Trump's cabinet to resign in the wake of Wednesday's incidents.

U.S. Transportation Secretary Elaine Chao announced her resignation on Thursday in protest over chaos and violence that overran Capitol Hill a day earlier.

In a letter to her colleagues at the Department of Transportation, Chao said her resignation will take effect on Monday.

"Yesterday, our country experienced a traumatic and entirely avoidable event as supporters of the President stormed the Capitol building following a rally he addressed," she wrote. "As I'm sure is the case with many of you, it has deeply troubled me in a way that I simply cannot set aside."

Chao, 67, has served as transportation secretary of the United States since 2017.

She is the first member of outgoing President Donald Trump's cabinet to resign in the wake of Wednesday's incidents.

Chao was previously labor secretary under President George W. Bush from 2001 to 2009. Her husband is Senate Majority Leader Mitch McConnell, a Kentucky Republican.

Chaos and violence forced an hours-long lockdown on the Capitol grounds, which also left four people dead, with multiple injuries and dozens of arrests. Trump has been roundly criticized for inciting the unrest with unproven claims that the election was fraudulent.