In declaring the final vote totals, Vice President Mike Pence certified the Electoral College count of 306 votes in favor of Biden against 232 in favor of Trump.

It takes at least 270 electoral votes to win the White House. Biden also won the popular vote by more than 7 million ballots.

"The announcement of the state of the vote ... shall be deemed a sufficient declaration of the persons elected President and Vice President of the United States," Pence said.

Soon after Congress concluded the electoral vote count certifying Biden's victory, Trump, who had repeatedly refused to concede the election, pledged that there will be an "orderly transition" of power. 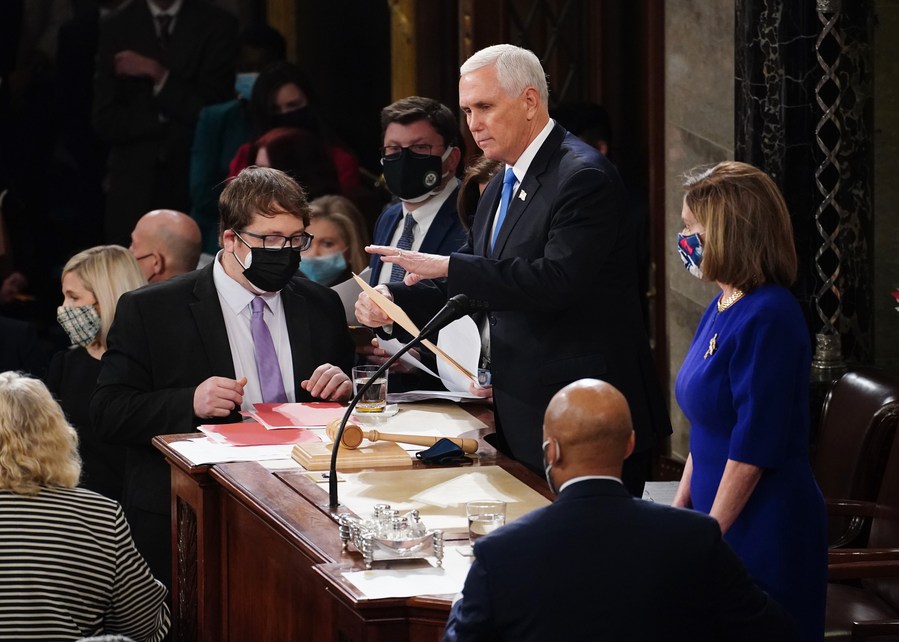 "Even though I totally disagree with the outcome of the election, and the facts bear me out, nevertheless there will be an orderly transition on January 20th," Trump said in a statement.

The U.S. Congress met Wednesday afternoon in a joint session to formally count the electoral votes, a traditional, ceremonial event.

Before the final victory was announced, supporters of Trump stormed the Capitol, halting the certification process for several hours.

Police announced a lockdown on the Capitol after protesters forced their way into the historic building where lawmakers were debating separately in their own chambers an objection to Arizona's results.

A picture showed officers inside the House chamber drawing their guns near a barricaded door in a standoff with protestors. 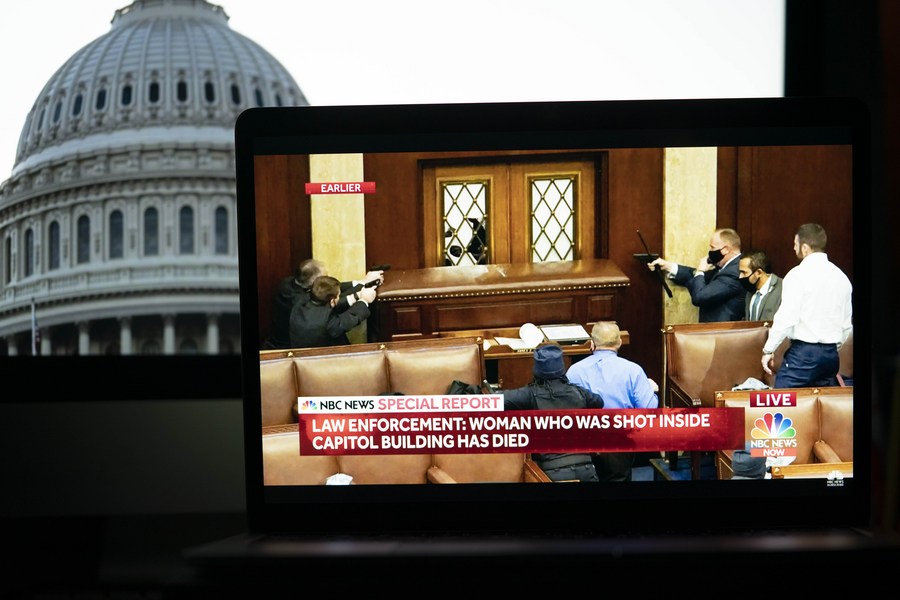 Security staff in the U.S. Capitol building reacting to the chaotic situation in a video feed from NBC news is displayed on a screen in Arlington, Virginia, the United States, on Jan. 6, 2021. (Xinhua/Liu Jie)

Four people, including a woman who was shot by Capitol Police, died amid clashes between police and Trump supporters, which also led to dozens of arrests, according to police. At least 14 officers sustained injuries.

On Wednesday noon, Trump addressed a massive crowd of his supporters on the Ellipse, a park just south of the White House, and encouraged demonstrations on Capitol Hill.

In a video clip posted later, he urged the protesters to "go home" but fell short of denouncing the chaos while doubling down on allegations that the election had been "stolen."

A growing number of political figures of both parties, including former U.S. presidents, have condemned the violence at the Capitol. Many took a shot directly at Trump, accusing him of fanning the flames of unrest.

"What happened here today was an insurrection, incited by the President of the United States," Senator Mitt Romney of Utah said in a statement on Wednesday.