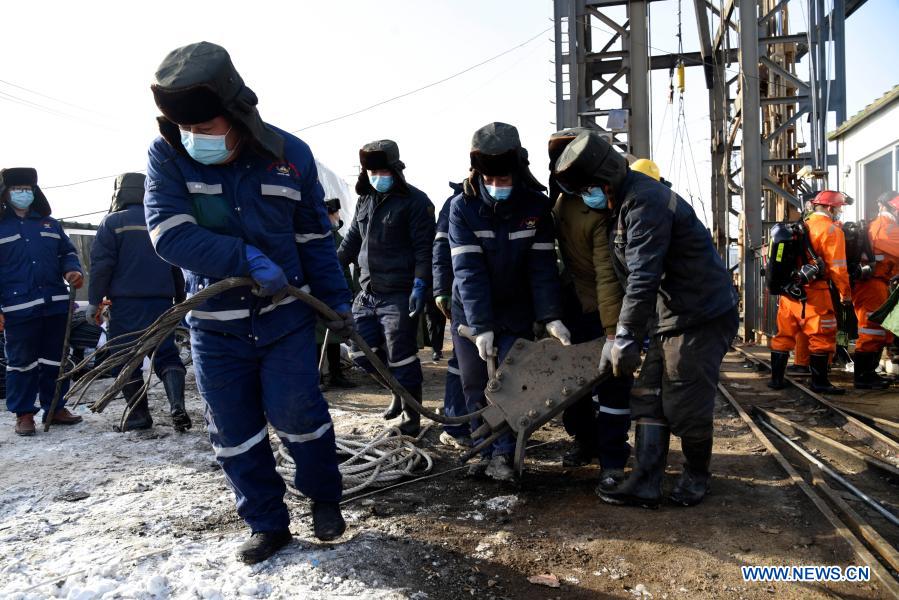 Rescuers are seen at the explosion site of a gold mine in Qixia City, east China's Shandong Province, Jan. 12, 2021. More than 300 rescuers have joined the search for 22 workers who were trapped underground after an explosion ripped through a gold mine under construction in Shandong, local authorities said Tuesday. (Xinhua/Wang Kai)

More than 300 rescuers have joined the search for 22 workers who were trapped underground after an explosion ripped through a gold mine under construction in east China's Shandong Province, local authorities said Tuesday.

Work has been conducted to vent toxic gas from the mine, bringing the air quality at a depth of 300 meters to the required standard for human respiration, according to the on-site rescue headquarters.

As of 4 p.m. Tuesday, a rescue bucket has been lowered to a depth of 180.5 meters. Firefighters have transported a sound detection system to a depth of 370 meters and are continuously monitoring the conditions there.

The accident took place at 2 p.m. Sunday at the gold mine in Qixia City, said a spokesperson with the government of Yantai City, which administers Qixia. The local government did not receive an accident report from the mining company until Monday evening.

Due to damage the communication system sustained in the blast, rescuers have so far been unable to contact the trapped workers, said the spokesperson.

By 10 a.m. Tuesday, large machinery such as drilling machines has been installed at the site. A drill pipe has reached a depth of more than 360 meters, and rescuers are being lowered to clear obstacles and rescue the trapped miners, said Sun Shufu, director of Yantai Municipal Emergency Management Bureau.

"As long as there is a glimmer of hope, we will do everything we can and won't give up," Sun added.

The gold mine is owned by Shandong Wucailong Investment Co. Ltd., a local company in Qixia. Enditem