The U.S. House on Wednesday voted to impeach President Donald Trump over "incitement of insurrection," making him the first president to be impeached twice.

While the number of Democrats sponsoring the impeachment article indicated there had already been enough votes to impeach the president in the days leading up to the floor vote, 10 Republicans cast the "yea" vote.

That is a stark contrast to the last time the House voted to impeach Trump in December 2019, at which time no Republican representatives crossed the party line. The final vote on Wednesday was 232 in favor and 197 against.

With Trump being impeached and Democrats not only demanding his conviction and removal in the Senate trial, but also asking for his "disqualification to hold and enjoy any office of honor, trust, or profit under the United States," all eyes have turned to Senate Majority Leader Mitch McConnell, who will decide when to hold the Senate trial that will determine the president's fate.

Kicking off the debate over the article of impeachment earlier in the day, Pelosi cited the Capitol riot by Trump loyalists last week and said the president "incited this insurrection, this armed rebellion against our common country." "He must go. He is a clear and present danger to the nation that we all love," she added.

For those Republicans who opposed impeaching Trump, few of them defended the president on the ground of what he did prior to the Capitol intrusion. They argued instead that the Democrats were rushing to remove the president without due process and at a time when Trump will hand over the presidency to President-elect Joe Biden in merely a week. They accused the Democrats of further dividing the country.

"They're rushing to judgment in my opinion and bringing up impeachment after failing to follow any meaningful process whatsoever," said Tom Cole, ranking member of the House Rules Committee, during the debate. "No hearings have been held. No witnesses heard, no process or opportunity to respond was provided to the president."

House Minority Leader Kevin McCarthy acknowledged that Trump "bears responsibility for (last) Wednesday's attack on Congress by mob rioters," but stressed that "impeaching the president in such a short timeframe would be a mistake." He called for national unity, saying "we must seize this opportunity to heal and grow stronger."

The impeachment resolution cited Trump's speech to supporters on Jan. 6 that was followed by some of the crowd breaching the Capitol building to interrupt Congress's certification of the 2020 election results as his "incitement of insurrection." 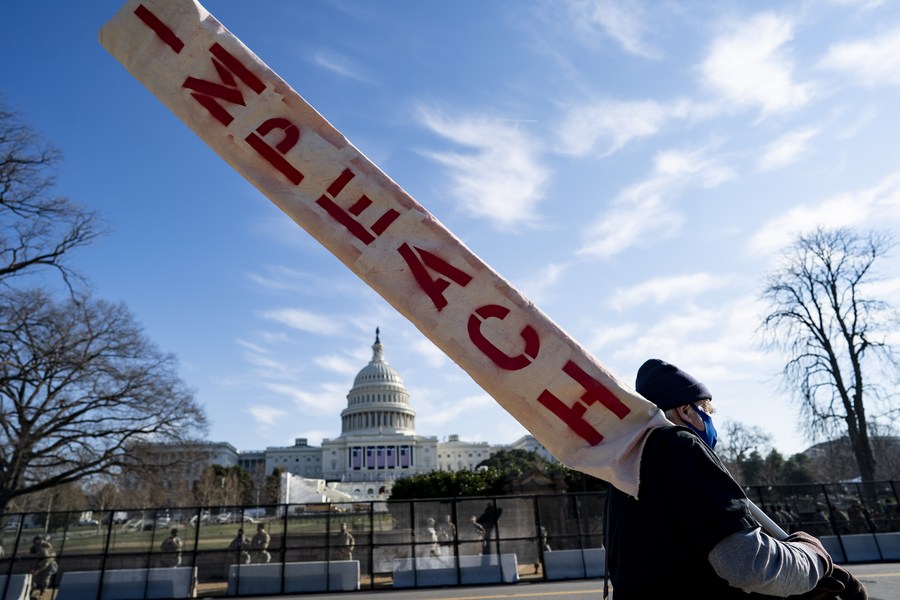 On top of that, the president's repeated claims of voter fraud in the election, as well as his Jan. 2 phone call with Georgia Secretary of State Brad Raffensperger to press him to "find enough votes" to overturn the state's presidential election results, were also mentioned in the resolution as proof that Trump "gravely endangered the security of the United States and its institutions of Government," that he "threatened the integrity of the democratic system, interfered with the peaceful transition of power, and imperiled a coequal branch of Government."

With Trump being impeached and Democrats not only demanding his conviction and removal in the Senate trial, but also asking for his "disqualification to hold and enjoy any office of honor, trust, or profit under the United States," all eyes have turned to Senate Majority Leader Mitch McConnell, who will decide when to hold the Senate trial that will determine the president's fate.

McConnell, who on Wednesday tried to cool down the heat of previous media reports saying he was pleased with the impeachment and believed it to be a good option to purge Trump from the Republican Party, issued a formal statement rejecting an early trial in the Senate, which is now in recess.

"The House of Representatives has voted to impeach the President. The Senate process will now begin at our first regular meeting following receipt of the article from the House," read the statement. "Given the rules, procedures, and Senate precedents that govern presidential impeachment trials, there is simply no chance that a fair or serious trial could conclude before President-elect Biden is sworn in next week."

On the part of the Democratic Party, Pelosi didn't respond directly to questions about her plan for transmitting the article of impeachment to the Senate, as some Democrats floated the idea of delaying the process until after 100 days into the Biden presidency so that some of the incoming president's cabinet nominees could be confirmed timely by the upper chamber.

Trump was impeached by the House in December 2019, with two articles of impeachment charging him with "abuse of power," and "obstruction of Congress" over his dealings with Ukraine. He was acquitted by the Senate, in which the number of senators supporting his conviction failed to reach the required two-thirds majority.