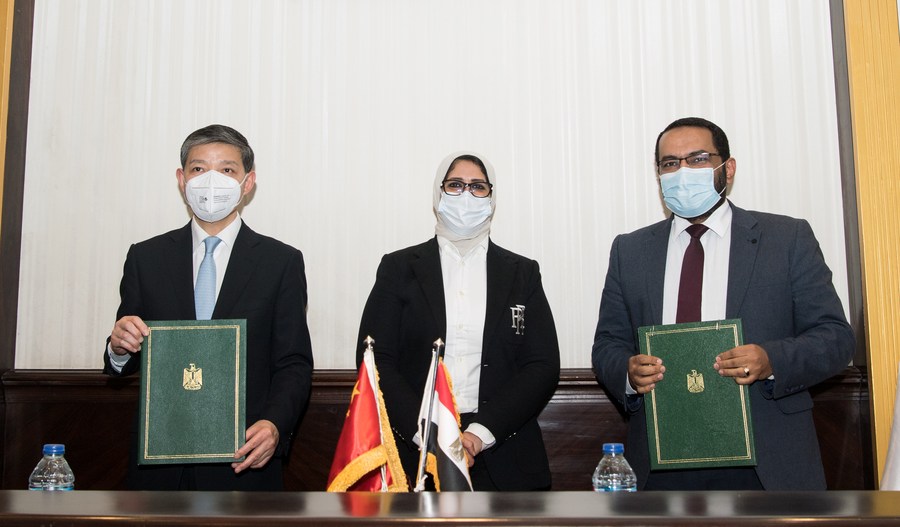 China's total exports to Egypt reached 12.06 billion U.S. dollars during the first 11 months of 2020, registering an annual increase of 12.2 percent, the Chinese Embassy in Egypt said on Wednesday.

Meanwhile, the total trade volume between the two countries during the same period hit 12.895 billion dollars, with a 10 percent annual increase, Han Bing, minister counselor for commercial affairs of the embassy, told an online press conference.

The conference was held to review the economic and trade cooperation between China and Egypt in 2020.

"In 2020, bilateral trade has weathered through COVID-19 and maintained stable momentum of growth. China remains the first trading partner of Egypt," Han emphasized.

According to statistics from the Ministry of Commerce of China, from January to September 2020, China's new direct investment in Egypt amounted to 89.33 million dollars, up 19.3 year on year.

The Central Business District (CBD) project includes building the 385-m high 80-floor Iconic Tower, which is expected to be the tallest skyscraper in Egypt and Africa upon completion.

He also noted that the ongoing joint project to establish a light rail to connect new cities on the outskirts of Cairo was also "progressing smoothly."

Over the past decade, China's industrial developer Tianjin Economic-Technological Development Area (TEDA) has been developing a total area of about 7.23 square km in Egypt's Suez Canal Economic Zone in Ain Sokhna district of Suez province.

"TEDA zone has altogether 96 enterprises and has attracted more than 1.25 billion dollars investment with total sales of more than 2.5 billion dollars," said the Chinese senior diplomat, noting that the zone provides more than 4,000 direct job opportunities.

In recent years, the Chinese government and financial institutions have provided loans and credit of over 7.5 billion dollars to Egypt, "which greatly bolstered bilateral economic cooperation," according to the Chinese official.