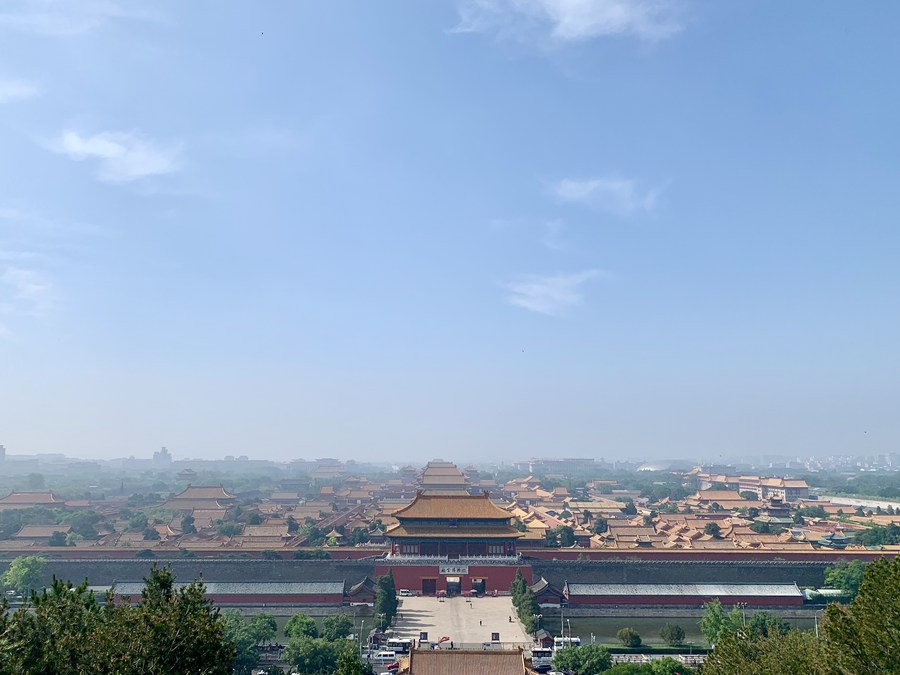 Photo taken with a mobile phone shows an overview of the Palace Museum in Beijing, capital of China, May 22, 2020. (Xinhua/Liu Lingyi)

Beijing's GDP reached over 3.6 trillion yuan (about 558.5 billion U.S. dollars) in 2020, up by 1.2 percent over the previous year at comparable prices, according to the Beijing Municipal Statistics Bureau on Tuesday.

The value-added output of major industrial enterprises in Beijing increased by 2.3 percent during the period, with the manufacturing of computers, communications and other electronic equipment seeing a rise of 14.6 percent.

Statistics also indicate that the capital city continued to see a robust high-tech manufacturing industry in 2020, with the value-added output up 9.5 percent.

The added value of the tertiary industry rose to more than 3 trillion yuan, with the financial sector up by 5.4 percent to 718.8 billion yuan, bolstering the recovery of the service industry in 2020.

Beijing saw its investment in fixed assets increasing by 2.2 percent year on year, among which investment in high-tech services rose by 16.5 percent.

The city's consumer price index went up by 1.7 percent over the previous year in 2020, and its producer price index dropped by 0.9 percent.

According to the bureau, the per capita disposable income of residents in Beijing was 69,434 yuan last year, up by 2.5 percent year on year. That of urban residents was 75,602 yuan, up by 2.4 percent over the previous year.