-- The southwestern province of Guizhou has become the front runner of China's big-data industry since it was approved to build the country's first national big-data comprehensive pilot zone in 2016.

-- It is also one of the regions with the highest number of mega-data centers in the world. Several heavyweight players, such as Apple and Huawei, have established their cloud computing and big-data centers and their regional headquarters in the province.

-- Guizhou will strengthen the data center clustering effect, promote the integration of big data with the real economy, and improve the industrial development environment, to boost the development of the big-data industry.

The southwestern province of Guizhou has become the front runner of China's big-data industry since it was approved to build the country's first national big-data comprehensive pilot zone in 2016.

It is now one of the regions with the highest number of mega-data centers in the country and even in the world. Several heavyweight players, such as Apple and Huawei, have established their cloud computing and big-data centers and their regional headquarters in the province. 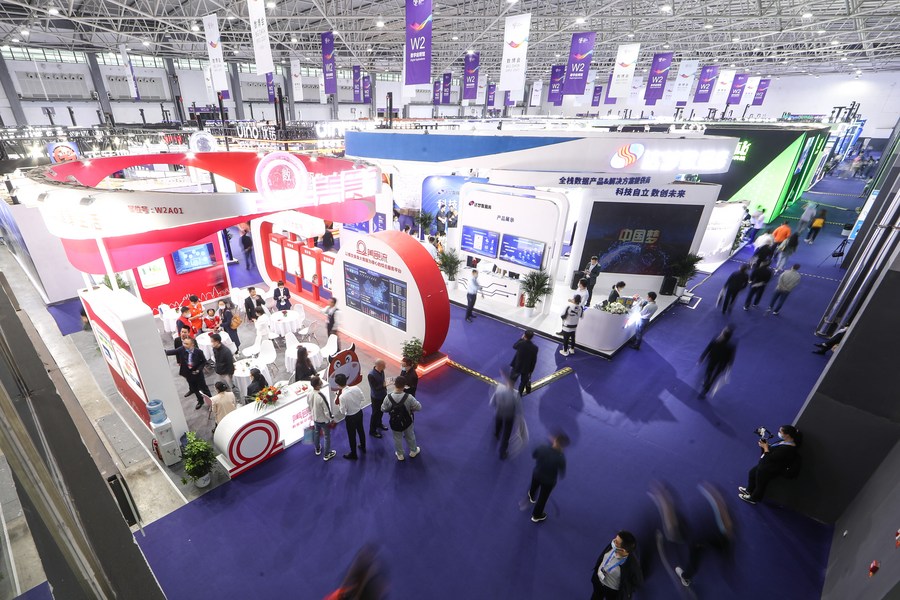 Its rich big-data resources are injecting growth momentum into the digital economy. Between 2016 and 2020, Guizhou's digital economic growth rate ranked first in China for five consecutive years. In 2021, the added value of its digital economy is expected to exceed 600 billion yuan (about 91.7 billion U.S. dollars).

As the country's pioneer in implementing the national big-data strategy, Guizhou will pool efforts, such as strengthening the data center clustering effect, promoting the integration of big data with the real economy, and improving the industrial development environment, to boost the development of the big-data industry.

Chinese tech giant Huawei is accelerating the construction of its industrial park, including a data center and a university, in Gui'an New Area, a national-level new urban area in Guizhou.

After completion in August, the data center can install about 800,000 servers to store Huawei's global management data and provide cloud services for users from 170 countries and regions. 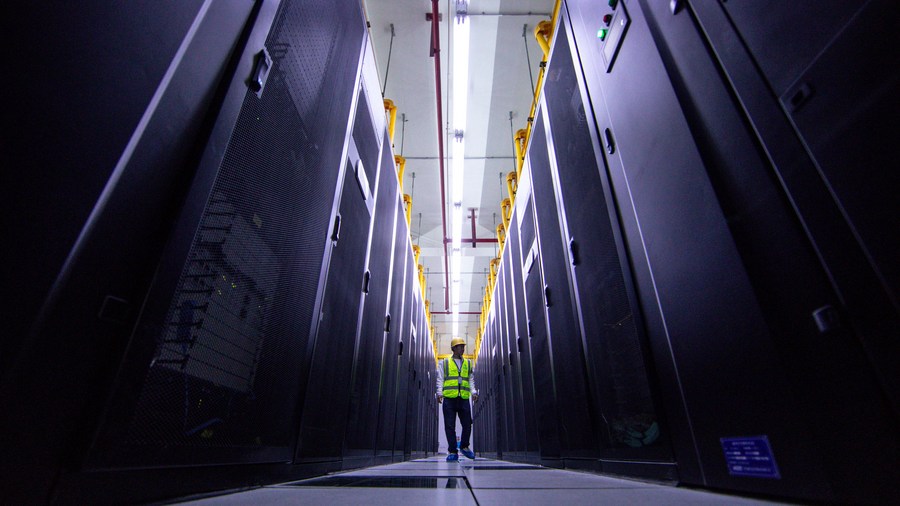 A staff member checks equipment at a data center of China Mobile in southwest China's Guizhou Province, May 24, 2021. (Xinhua/Ou Dongqu)

One street away, Apple's first Chinese data center, with an investment of 1 billion U.S. dollars, commenced operation on Tuesday. It will likely further improve Chinese users' experience in terms of access speed and service reliability, as well as improve the overall reliability of Apple's products and services on the Chinese mainland.

As a core part of the National Big Data (Guizhou) Comprehensive Pilot Zone, Guiyang and Gui'an New Area as a whole has witnessed rapid growth in big-data businesses over the last few years due to its advantages in climate, power supply, and network infrastructure.

In 2020, it was home to more than 5,000 big-data companies and 23 data centers in operation or under construction. The added value of its digital economy reached 164.9 billion yuan the same year.

"Guizhou is expected to become one of the largest data centers in the world in a few years," said Vladimir Norov, Secretary-General of the Shanghai Cooperation Organization, during the China International Big Data Industry Expo 2021, which concluded on Friday in Guiyang, the provincial capital of Guizhou.

In its Guiyang factory of Sunlord Electronics, a company engaged in the development, manufacturing, and sales of electronic chip components, its nearly 600 production machines have realized automatic manufacturing and product data collection since 2020.

"In the past, a worker could only control four machines. After the intelligent upgrading of manufacturing with big data, one worker can now control 20 machines, and there is no need to manually check inventory, orders, and materials," said Deng Shichun with the company.

"The production capacity has expanded by 70 percent, costs reduced by 40 percent, and production efficiency increased by 60 percent," added Deng.

In the past few years, Guizhou has strived to promote the in-depth integration of big data with the real economy. So far, over 6,000 enterprises have carried out intelligent upgrading of manufacturing. Over 20,000 enterprises have used cloud and big-data services in their production.

In 2020, Guizhou's digital economy grew by more than 15 percent year on year. Its in-depth integration index of big data with the real economy reached 41.1 percent in 2020, 7.3 percentage points higher than that in 2017.

The province has also made efforts to promote the in-depth integration of big data with poverty alleviation, rural vitalization, and social governance. For example, Guizhou has established the country's first provincial government data platform, allowing the online handling of all provincial, municipal, and county-level government services.

To boost the development of the digital economy, especially the big-data industry, Guizhou has taken a slew of measures and policies to beef up the weak links in talent, infrastructure, and regulations.

From 2016 to 2020, Guizhou had completed the construction and upgrading of optical fibers in 8,900 administrative villages, built over 5,000 4G base stations, and achieved 4G coverage in all its natural villages with more than 30 households.

By the end of 2020, Guizhou had built over 20,700 5G base stations, achieving 5G network coverage in its nine cities and prefectures, with all its counties connected with the 5G network. It will also strive to achieve full commercial use of 5G by 2022.

To solve the shortage of talent, Guizhou formed a sound big-data talent cultivation system ranging from vocational training to college education. The Ministry of Education has approved eight universities in the province to set up majors in data science and big data technology.

To promote the law-based development of the big-data industry, Guizhou also introduced local regulations in 2016 to regulate data acquisition, sharing, security, and other issues.

In 2016, Guiyang took the lead in the country in building a big-data security base in China. To date, more than 100 big-data security institutions and enterprises had settled in the Guiyang Economic and Technological Development Zone, with an industrial scale of over 10 billion yuan.