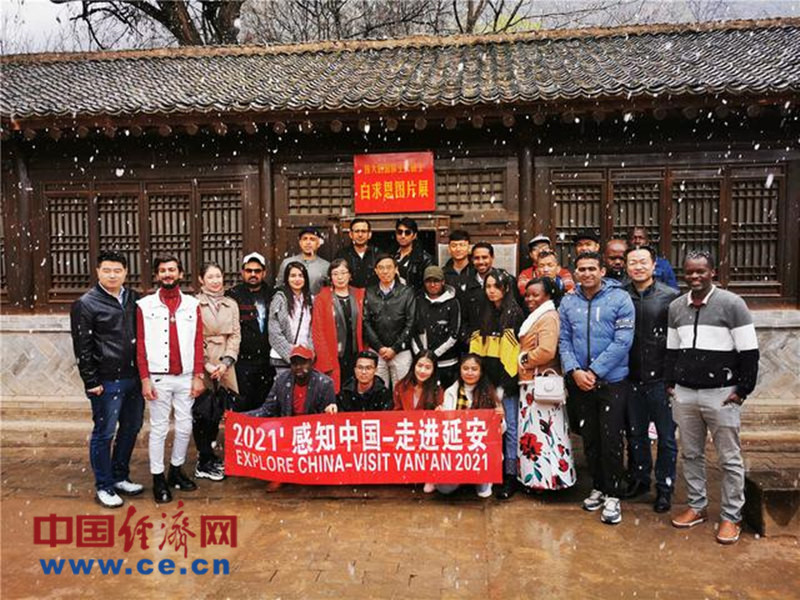 Over 20 international students from Northwest Agriculture and Forestry University, China including two Pakistani students, Mansoor Ahmed Koondhar and Abdul Ghaffar Shar, visit YanˇŻan, Shaanxi Province, China in April 2021. [Photo provided by NWAFU]
XIANYANG, June 30 (China Economic Net) ¨C Chinese President Xi Jinping replied to a letter from international students at Peking University on June 21, urging them to gain a deeper understanding of China and promote friendship between the peoples of all countries.
President XiˇŻs remarks inspired Pakistani students studying at Northwest Agriculture and Forestry University (NWAFU), China.
Mansoor Ahmed Koondhar, a PhD student in Agriculture and forestry economic management, said President Xi expressed welcome to outstanding youth from other countries to study in China, which showed the mind of a big power.
ˇ°What touched me most is the people-centered philosophy of the Communist Party of China (CPC). CPC put peopleˇŻs lives and health first when the COVID-19 pandemic outbroke globally. We, international students, have been taken good care at the campus.ˇ±
Abdul Ghaffar Shar, a major in plant nutrition, said that he has studied and lived in China in the past seven years and experienced the countryˇŻs rapid development and changes.
ˇ°We have taken part in ChinaˇŻs poverty alleviation campaign in Heyang County and Zhenba County Shannxi Province in the past three years. I am very glad to hear that the two counties have got rid of poverty,ˇ± he added.
In the letter, Xi also called on international students to visit more parts of the country. NWAFU organized over 20 international students including Koondhar and Shar to visit YanˇŻan, a city in Shaanxi Province China in April 2021.
ˇ°YanˇŻan was once described as one of the poorest places in China in Edgar Snow's Red Star Over China. With great changes having taken place, Yan'an or elsewhere in China, now, is quite different from what was depicted in the book,ˇ± said Koondhar.
This trip to Yan'an made him learn a lot. Koondhar planned to devote to constructing Pakistan after graduation and meanwhile contribute to enhancing China-Pakistan friendship.
Xi also replied a letter in May 2020 to Pakistani students at the University of Science and Technology Beijing, China and encouraged them to communicate more with their Chinese peers and contribute to promoting people-to-people connections and building a community with a shared future for mankind.