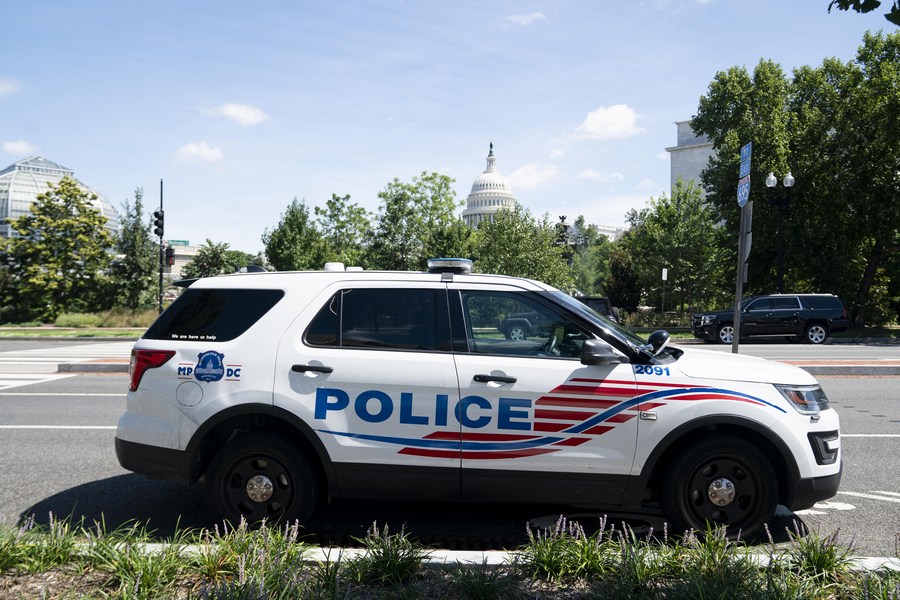 A police vehicle is seen near the Capitol building in Washington, D.C., the United States, on Aug. 19, 2021. (Xinhua/Liu Jie)

U.S. Capitol Police said the suspect "has been safely taken into custody." Multiple buildings belonging to the sprawling Capitol Complex have been evacuated due to the incident, including the Supreme Court building.

The suspect who drove near the U.S. Capitol building Thursday threatening that the bomb in his vehicle would detonate ultimately surrendered and was taken into custody, U.S. Capitol Police (USCP) said, ending an hours-long standoff starting in the morning during which multiple nearby buildings were evacuated.

The USCP said in a tweet that the suspect, identified as 49-year-old Floyd Ray Roseberry, "has been safely taken into custody."

USCP Chief Tom Manger told a news briefing that the man had parked a pickup truck in front of the Library of Congress, which is adjacent to the Capitol building, for several hours and had "advised he had explosives."

Manger said officials do not know if there are still explosives in the vehicle and the site under ongoing investigation is still an "active scene." Officials still need to search the vehicle and render it safe, he said.

The suspect eventually got out of the vehicle and surrendered, bringing an end to negotiations during which law enforcement officers tried to use a white board to communicate with the man, who at one time refused to use a telephone officials sent to him via a robot, according to Manger.

Speaking of Roseberry's background currently known to police, Manger said the man "has had some losses of family. I believe his mother recently passed away, and we spoke with members of his family, and there were other issues that he was dealing with."

Manger also confirmed some of the negotiations were being live-streamed on social media.

In a livestream video Roseberry posted onto his Facebook page, the suspect was talking about a "revolution," calling on "other patriots," and trying to get President Joe Biden or a representative to speak with him via telephone. The White House said Biden has been briefed on the incident.

Roseberry also warned that the sound-sensitive bomb in his truck would explode in the event of bullets shattering the glass, claiming in the meantime that four other "patriots" were inside four other vehicles in the area that were set to explode as well.

Describing himself as being apolitical, Roseberry in the video repeatedly called out Democrats, venting his fury with them over the U.S. withdrawal from Afghanistan and urging them to resign from public office. "I don't want to die," he said, "I'm not hurting anybody."

Facebook spokesman Andy Stone said they removed the Roseberry's Facebook account and are investigating, reported The Washington Post, which cited a law enforcement official as saying while Roseberry seemed to be the only suspect, it was too early to definitively rule out his claims of having other explosives or working with others.

The incident led to a massive police response on Capitol Hill involving the Washington Field Division of the Bureau of Alcohol, Tobacco, Firearms and Explosives, the Federal Bureau of Investigation's Washington Field Office National Capital Response Squad and the District of Columbia's Metropolitan Police.

Multiple buildings belonging to the sprawling Capitol Complex have been evacuated due to the incident, including the Supreme Court building, the Cannon House Office Building, the Library of Congress' Thomas Jefferson Building and James Madison Memorial Building.

The House and the Senate are both in summer recess and most lawmakers are not in their offices. The Supreme Court Building remains closed to the public due to the COVID-19 pandemic.